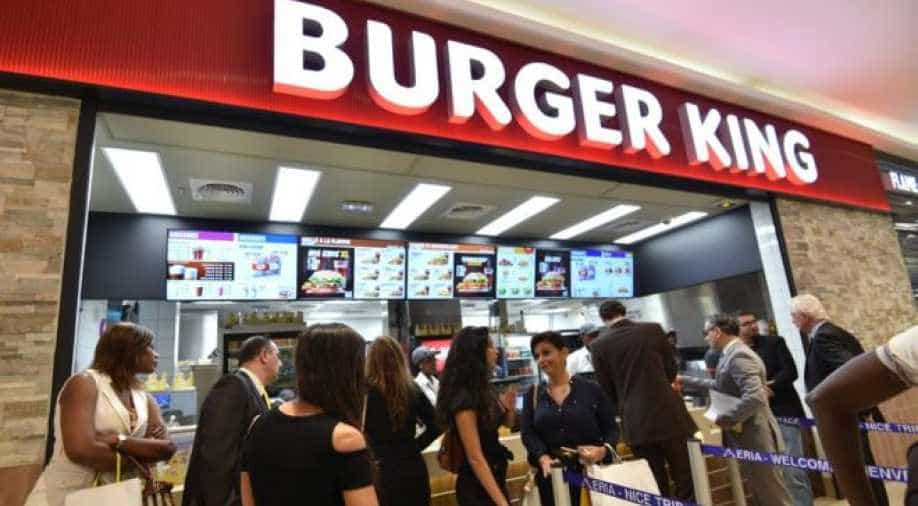 Against the issue price of Rs 60, Burger King Stock opened at Rs 115.35 on BSE, while on the National Stock Exchange, shares made a debut at Rs 112.50, a premium of over 87 per cent over the IPO price.

Burger King's IPO was a positive signal for the fast-moving consumer goods market.

The company began its journey on Indian bourses with a stupendous opening garnering a premium of over 92 per cent on the first day of trade on Monday.

Against the issue price of Rs 60, Burger King Stock opened at Rs 115.35 on BSE, while on the National Stock Exchange, shares made a debut at Rs 112.50, a premium of over 87 per cent over the IPO price.

The performance of the stock had even defied projections made by analysts who had expected Burger King to list at around 70-75 per cent premium over the issue price.

"Such listing was in line with our expectation as the company issue was priced at a significant discount compared to listed peers such as Jubilant FoodWorks (Domino`s Pizza) and Westlife Development (McDonald). Short term investors can book profit. We advise long term investors to stay invested in the company as there is ample scope available for the company to increase its business in India," Keshav Lahoti, Associate Equity Analyst, Angel Broking Ltd said.

"Even after such bumper listing, there is no issue with the valuation of the company. In the future, we expect the company to gain market share by opening more stores compared to the competitors. As the store count will increase, operating leverage will kick in and the company will be able to report profit and it will lead re-rating of the multiple for the stock," he added.

BKIL enjoys exclusive National Master Franchisee Rights in India till December 31, 2039, with an obligation to develop and open at least 700 restaurants by December 2026. It is one of the fastest-growing QSR chain India with 268 restaurants spread across 17 states/UTs and 57 cities. It has already garnered 5 per cent market share in India`s Rs 34,800 crore QSR market.

According to Motilal Oswal Financial Services, Over FY18-20, BKIL`s Revenue/EBITDA grew at a CAGR of 49 per cent/258 per cent led by 2x the store strength. However, it continues to make losses at PAT level. The same-store sales growth stood at 12.2 prt cent/29.2 per cent in FY18/FY19 while it surprisingly became flat in FY20. In 1HFY21, revenue declined 68 per cent YoY, while it made losses at EBITDA and PAT levels due to the Covid-19 impact.