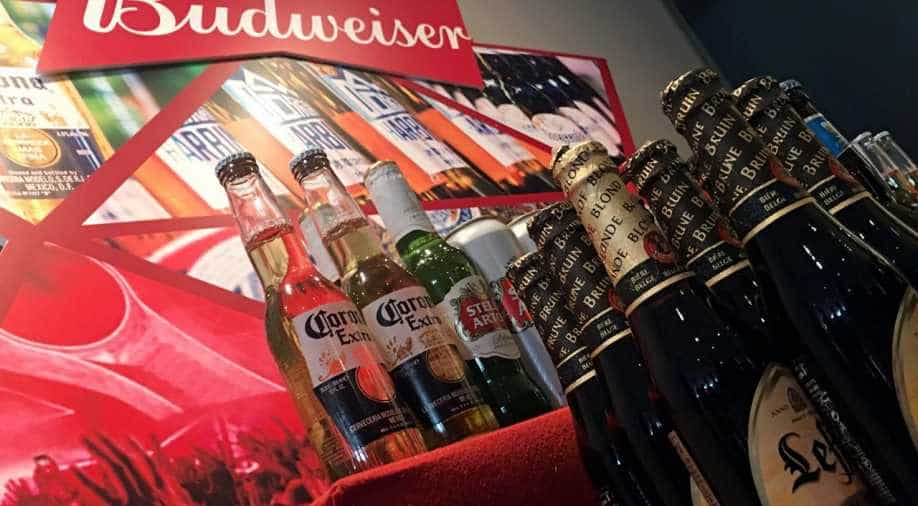 Products are banned after a 3-year investigation which found that beer maker SABMiller - acquired by AB InBev in 2016 - used duplicate barcodes.

The city government orders from earlier this month followed a 3-year investigation which found that beer maker SABMiller - acquired by AB InBev in 2016 for around $100 billion - used duplicate barcodes on its beer bottles supplied to city retailers that year, allowing it to pay lower levies.
AB InBev said in a statement it denied the Delhi government`s allegations and would appeal against the order.

"The barcodes were being duplicated by ... SABMiller and supplied to the retail outlets to evade payment of excise duty," said a 19-page order, dated July 16, which detailed the findings.

In a second-order last week, the Delhi city authority said that AB InBev should be put on a "blacklist" for three years. It also called for the sealing of two of AB InBev's warehouses in the capital city, an action that a senior Delhi government official told Reuters on Tuesday had already been completed.

"This means the company is debarred from Delhi market for all purposes unless they appeal against this," said the official, adding that no fresh stock of AB InBev beer brands can be sold at liquor shops or restaurants.

Neither of the orders had been previously reported.

AB InBev, which counts popular beer brands such as Budweiser, Hoegaarden and Stella Artois in its portfolio, told Reuters the Delhi government's allegations related to operations of SABMiller before its takeover, and it looked forward to receiving a fair hearing on the matter.

"Integrity and ethics are part of our core values ... (We) look forward to presenting our views in full cooperation with the excise appellate process," a company spokesman said.

Though separate local market share figures were not available, industry executives said the Delhi ban would be a major setback for AB InBev, which is also battling a separate Indian antitrust probe concerning alleged beer price-fixing by SABMiller and other companies.

"New Delhi remains an extremely critical market for any beer company ... this is the country`s social capital, apart from Mumbai. It`s a showcase market for the premium beer portfolio," said a former senior AB InBev executive, who declined to be identified.

A young and affluent population and a growing pub culture, especially in the big cities, have spurred beer consumption in India. That is despite the fact that the industry is tightly regulated, with most states individually regulating pricing and imposing taxes, which form a vital source of their revenues.

Sandeep Chilana, a New Delhi-based lawyer specializing in excise law, said that rules mandate each beer bottle sold in the city has to have a unique barcode for track and trace purposes and to ensure there is no duty evasion.

The current dispute centres around a random inspection at BarShala, a drinking spot in a posh New Delhi area, on the night of Aug. 16, 2016. City officials said they found 12 beer bottles of SABMiller brands at the bar that barcode records showed should have been in the company warehouse at the time.

A follow-on investigation showed that some beer bottles sent to the bar in November had identical barcodes to those found in the inspection in August, the government order said.

The bar denied any wrongdoing.

The brewer argued the discrepancy could be due to the technical or clerical errors in the barcoding system, but the city government said the company`s defence was "devoid of merit", according to the order.

The Delhi government said it was "reasonable to believe" that the same barcodes were duplicated multiple times and supplied to various retail vendors in Delhi, adding that this amounted to the offence of selling non-duty paid liquor.