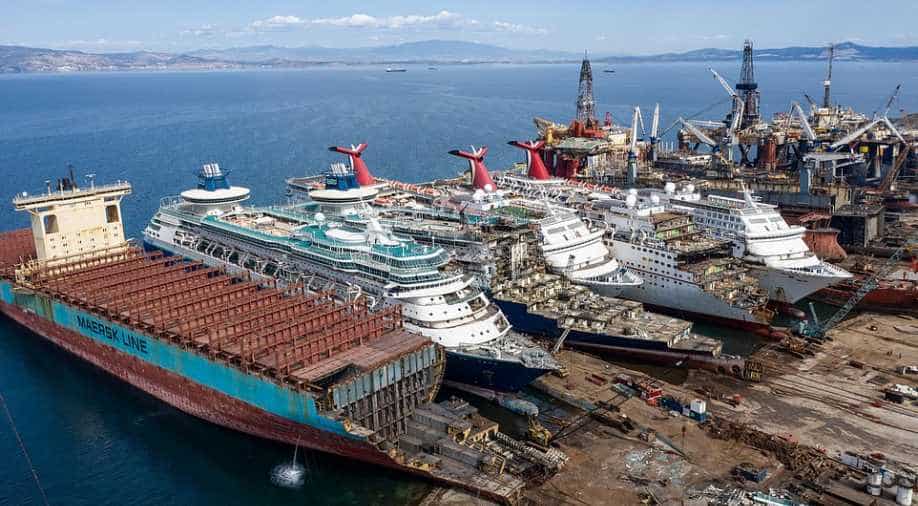 A few cruise ships were also home to the some of the earliest clusters of coronavirus outbreak.

The cruise industry has been hit hard by the pandemic, and no-sail orders have been put in place by some countries.

A few cruise ships were also home to the some of the earliest clusters of coronavirus outbreak.

Consequently, some ships have now been sent for scrap earlier than planned. In March, US authorities issued a no-sail order for all cruise ships that remains in place.

Britain and others have also issued specific advice against travelling on the vessels.

To this end, cruise ships from Britain and the United States are being scrapped at a Turkish dock.

The coronavirus cruise liner graveyard -- at the port in Aliaga, a town 30 miles north of Izmir on Turkey's west coast -- was crowded once again on Friday as scrapyard workers stripped walls, windows and railings from five vessels.

One of the five ships in the scrapyard was the Carnival Fantasy formerly operated by the American giant Carnival Cruise Line. In July, Carnival Corporation's CEO 13 ships from its fleets would be recycled in 2020.

Three more ships are set to join those already being dismantled.

Back then, a little over 2,500 people worked at the yard in teams that take around six months to dismantle a full passenger ship. The vessels arrived from Britain, Italy and the United States.

The shipyard now aims to increase the volume of dismantled steel to 1.1 million tonnes by the end of the year.