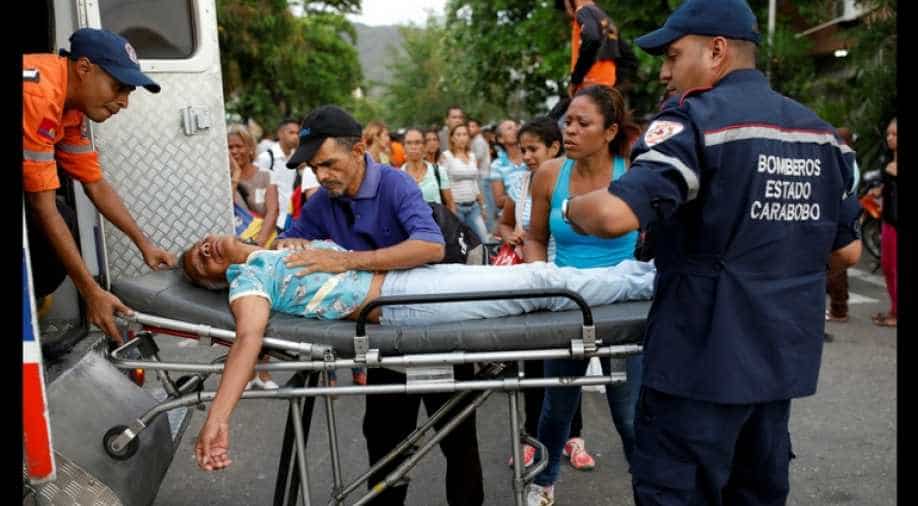 Paramedics help a relative of inmates held at the General Command of the Carabobo Police, who fainted, outside the prison, where a fire occurred in the cells area in Valencia, Venezuela. Photograph:( Reuters )

Venezuela arrested five state police officials for their alleged role in a riot and fire that killed 68 people in an overcrowded police station cell, the country's public prosecutor said on Saturday.

"The prosecutor's office has issued arrest warrants for five officials of PoliCarabobo who have been signaled as responsible for the tragic incident that led to the death of 68 citizens in the cells of the headquarters of said regional police: THEY HAVE BEEN DETAINED #Justice," tweeted prosecutor Tarek Saab.

Saab, a former Socialist Party governor close to leftist President Nicolas Maduro, did not provide any further details on the cause of the disaster, the worst to affect Venezuela's notoriously violent jails in over two decades.

Relatives of dead inmates and one surviving prisoner told Reuters there was a shoot-out with police on Wednesday morning in the jail in Carabobo state capital Valencia.

One inmate's widow said officials had doused the area with gasoline, which fueled a fire through the small cells strung with hammocks and divided with sheets.

There was no immediate comment from Carabobo state police.

Venezuela's opposition blames the tragedy on Maduro's inability to reform Venezuela's lawless jails, where inmates strut around with weapons and orchestrate crimes from cells.

"The situation in detention centers and police jail cells in Venezuela is unacceptable!" said opposition lawmaker Miguel Pizarro. Opposition politicians have also criticized the government for its long silence about the incident. Maduro's administration only issued a statement late on Friday night expressing its condolences to relatives and the president has yet to publicly speak about the deaths.

A former bus driver and union leader who has grown widely unpopular, Maduro is running for re-election in a May election largely boycotted by the opposition.

With heavy use of state resources and a compliant electoral council, he is expected to win a six-year term despite salary-destroying hyperinflation, a fifth straight year of recession, and rampant crime.

State television focused on showing images of Venezuelans on the beach during the Easter holiday, while Maduro's ministers also largely remained mum on the Valencia disaster.

But Delcy Rodriguez, the president of thepro-government legislative superbody known as the constituent assembly, struck back at criticism of the government's handling of the jail fire. "We repudiate the use of Venezuelans' pain as a political tool," tweeted Rodriguez.