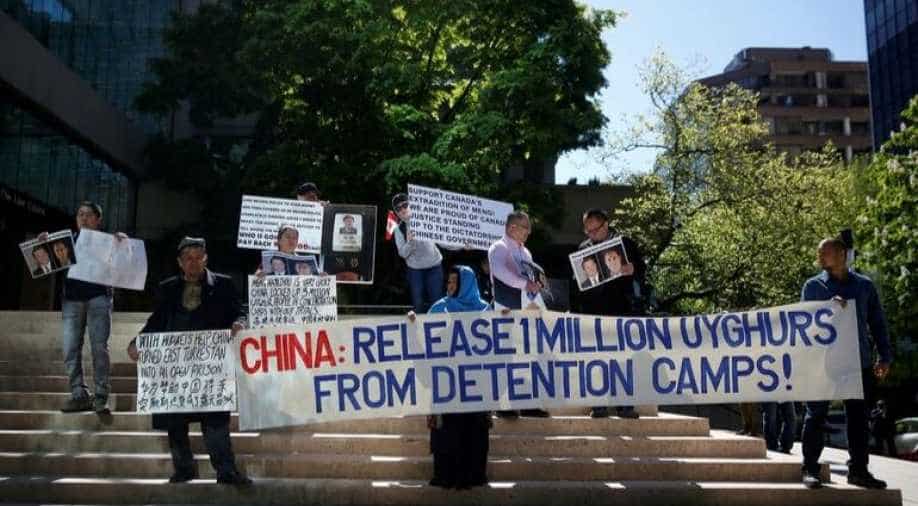 The legislation requires the US administration to determine which Chinese officials are responsible for the "arbitrary detention, torture and harassment" of Uighurs and other minorities.

The US Congress on Wednesday authorized sanctions against Chinese officials over the mass incarceration of Muslim Uighurs, ramping up pressure on another front in the troubled relationship between the Pacific powers.

The House of Representatives voted with just one dissent in favor of the Uighur Human Rights Act, hours of Secretary of State Mike Pompeo took a major step to press China on another major issue -- the autonomy of Hong Kong.

Rights groups say at least one million Uighurs and other Turkic Muslims in China's northwestern Xinjiang region have been incarcerated in camps in a massive brainwashing campaign with few modern parallels.

"If America does not speak out against human rights (violations) in China because of some commercial interest, then we lose all moral authority to speak out on human rights violations any place in the world," House Speaker Nancy Pelosi said.

The message was bipartisan with Michael McCaul, the top Republican on the House Foreign Affairs Committee, accusing China of "state-sponsored cultural genocide."

Beijing is out to "completely eradicate an entire culture simply because it doesn't fit within what the Chinese Communist Party deems 'Chinese,'" McCaul said.

"We can't sit idly by and allow this to continue," he said. "Our silence will be complicit, and our inaction will be our appeasement."

The legislation requires the US administration to determine which Chinese officials are responsible for the "arbitrary detention, torture and harassment" of Uighurs and other minorities.

The United States would then freeze any assets the officials hold in the world's largest economy and ban their entry into the country.

The law specifically mentions Chen Quanguo, the Communist Party chief in Xinjiang. Previously posted in Tibet, Chen has built a reputation for clamping down on restive minorities.

China initially denied the mass incarceration but has since described the camps as vocational training centers aimed at discouraging Islamic radicalism.

After an earlier version of the law passed in December, the Chinese foreign ministry accused the United States of hypocrisy in its own "counter-terrorism" efforts.

Trump can veto the legislation. But Congress could easily override his veto.

Trump last year hesitated at signing another law that angered China that sought to safeguard Hong Kong's autonomy but went ahead in the face of overwhelming support in Congress.

The House of Representatives passed a tougher version of the law that would restrict exports of technology involved in the mass surveillance of Uighurs, as critics fear a new dystopian model with Beijing tracking minorities' every move.

The Republican-led Senate stripped out the export provision to ensure unanimous passage, letting Trump handle technology issues as part of his long-running trade war with the Asian power.

The Commerce Department last week imposed sanctions on eight Chinese companies and an institute seen as complicit in the persecution of Uighurs and other minorities, including through surveillance.

The final version of the bill also requires a classified report by US intelligence on Xinjiang as well as a study led by the FBI on alleged efforts by China to target US citizens and residents of Uighur heritage.

Rubio and a Democrat, Representative James McGovern, have introduced separate legislation that would ban all exports from Xinjiang, a major supplier of cotton.

The lawmakers say forced labor is so prevalent in Xinjiang that it is impossible to ensure that products from the region are free of slavery.