Ukrainians abroad talk of shock and disbelief as homeland is invaded 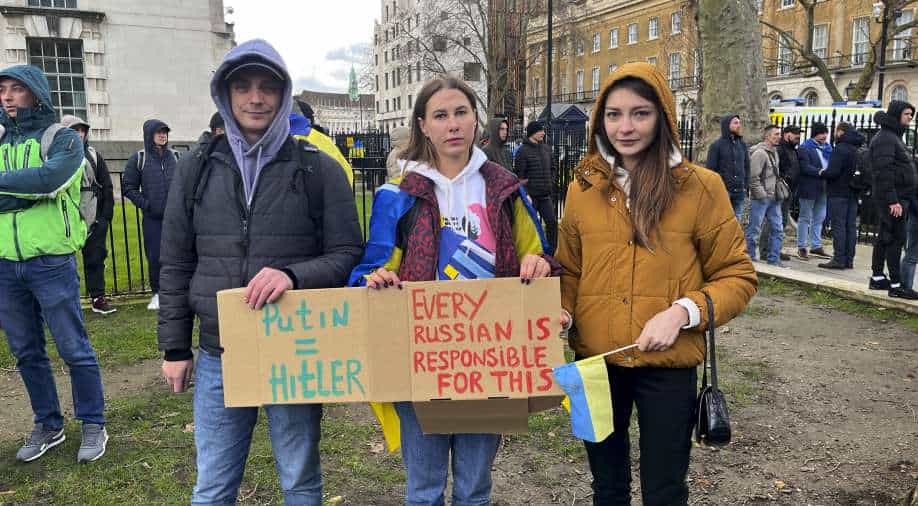 At protests in London on Thursday, some wept. Some fingered prayer beads. And many said they were determined to raise their voices and demand greater action by the world to end Russian aggression.

Ukrainians living across Europe watched in horror and disbelief from afar Thursday as Russia’s invasion of their home country began with shelling and rocket attacks in several cities.

Many shared feelings of helplessness as they received frantic calls from loved ones back home describing attacks nearby, instructing them what to do if they were killed in the conflict, or sending requests to empty bank accounts.

At protests in London on Thursday, some wept. Some fingered prayer beads. And many said they were determined to raise their voices and demand greater action by the world to end Russian aggression.

Yulia Tomashckuk, 29, wore sunglasses to shield her tears as she clutched a small Ukrainian flag. A village that neighbours her hometown in western Ukraine had been attacked, she said, news that her mother relayed to her by phone before dawn Thursday.

“I just felt I was useless sitting at home watching the news — here at least I can show there are people who support Ukraine, who are against war and who want Putin to be shown his place,” she said. “He needs to be stopped now.”

Russian President Vladimir Putin was the focus of much of the outrage.

Chants of “Putin, hands off Ukraine” and “U.K. support Ukraine” echoed from the crowd of hundreds that gathered outside Prime Minister Boris Johnson’s office at 10 Downing St. on Thursday.

Even before Russian strikes on Ukraine began, Britain and the European Union earlier this week announced targeted sanctions against Moscow. On Thursday, Johnson announced new actions from Britain and its allies that included asset freezes on major banks and individuals, a ban on Russian airline Aeroflot, and a ban on many technology exports to Russia.

Those who gathered near his office waved Ukrainian flags and demanded more stringent sanctions and broader actions from the West in response to Russian military action.

“I’m shocked, probably like everyone, because my family is still in Ukraine,” said Mariya Tymchyshyn, 30, who took time off work to join the protests. “We were panicked as well: We don’t know what to do. No one can be ready for this.”

Tymchyshyn’s family lives in the western part of Ukraine, away from the most fierce attacks, but she was worried for her grandparents, who as survivors of World War II have already lived through intense fighting in Ukraine.

“It’s probably the hardest part for us,” she said. “I was trying to calm down my grandmother, but she remembers being a child at that time and a bomb killed her mother. I want peace for all of us.”

Inna Tereshchuk, 26, who has lived in Britain for eight years, said her family members “are all scared for their lives.”

She is trying to remain strong for them.

“We don’t know how long they will be alive, what Putin has on his mind,” she said. “The whole world knows about it, and no one is doing anything.”

She was joined at the protest by her friend Alina Clarke, 25, whose family lives near Kyiv. Clarke spoke with her father, who vowed to stand his ground, telling her that he was not going anywhere and planned “to stay until the end.”

“I hope that in every city and town all over the world Ukrainians are going to come out and show that we are not afraid of Putin, and we want him to take his hands off our country,” Clarke said. “Ukraine has every right to exist.”

A small group also gathered at the Russian Embassy in northwest London, where a number of protests have been held in recent days, but by Thursday morning they had taken on a more somber tone. Among the handful who stood outside the embassy were a number of Russians denouncing their government’s actions.

Tatiana Rudayak, 46, a Russian-British woman who held a blue sign with the words “Stop the War” painted on it in bright yellow paint, was keen to have her voice heard.

“I am here because my country has started a war, and I couldn’t live with myself if I didn’t protest that,” she said. “I was fluctuating between despair and fury and this is the only thing I can do.”

Denis Zihiltsov, 34, who said he had not slept the night before, came to the embassy holding a sign in Russian that read, “I’m Russian and I demand you stop killing our brothers. Glory to Ukraine.”

“It's heartbreaking,” he said. “It’s killing people for nothing.”

The Belarus Free Theatre, one of Europe’s most acclaimed theater troupes, was rehearsing a play in an east London studio Thursday, but all of its members were continually checking their phones for updates on the conflict.

Several of its members are Ukrainian and everyone knew someone trapped in the country.

Marichka Marczyk, at the rehearsals in London, said in a telephone interview that she’d just had a text exchange with her brother in Kyiv about what to do if he was killed in the conflict. “My will is simple,” he replied. “Burn my body/scatter the ashes,” adding: “All my riches to my kid.” Those riches include his honey bees.

Similar scenes played out in cities across Europe, where Ukrainian expatriates were grappling with the troubling news from their homeland. In Berlin’s Pariser Platz, hundreds of somber protesters wrapped in Ukrainian flags gathered Thursday.

Lyudmyla Mlosch, 70, who runs an association for Ukrainians in Berlin, had been up since 5:30 a.m., trying to organize temporary shelter for friends, family and others who manage to leave the country. Her son and his family live in northwestern Ukraine and her grandson is studying at the university in Kyiv.

“My heart is broken in two,” she said.

“It’s such awful news; I’m so sad — I just feel helpless,” she said. “When Putin says Ukraine belongs to Russia, I don’t understand how he could do such a thing to his brother and his sister,” she said.

In Madrid, a small group of protesters, some in tears, gathered outside the Russian Embassy to demand an end to the invasion. They waved Ukrainian flags and shouted “terrorists.”

Nadiya Pshenychniak, a cleaner who has lived in Madrid for 20 years, said that she was extremely worried for her family in the western Ukrainian city of Lviv, including one of her daughters who recently had a kidney transplant. But, she added, “This is sadly not such a big surprise, because Russia has always wanted Ukraine and has a long history of doing horrible things to our people.”

Pshenychniak, 69, had plans to visit her family in the summer, but she now fears that it may be some time before she will see them again.

Near the Russian embassy in Rome, which was blocked off by the police, hundreds rallied.

“Only together can we win — we have to remain united,” said Oles Horodetskyy, the president of the Christian Association of Ukrainians in Italy, who helped organize the protest.

Horodetskyy said Ukrainian associations in Italy were organizing to “give as much help as possible,” and they hoped to create a humanitarian corridor to send clothing and food to Ukraine. The details were to be announced, he said, sighing. “It’s only the first day. It’s complicated.”

“There’s so much emotion,” said Valeria Skubrii, a 25-year-old Ukrainian sommelier in Paris, as the crowd behind her burst into the Ukrainian national anthem.

Skubrii said her parents called at 4 a.m. from Odessa, where they live, and where Russian troops landed earlier in the day. “My father this morning went to get some medicine — a blast near him was so strong that it threw him to the ground,” she said.

Oleksandra Chevtchenko, a member of a Ukrainian feminist protest group who fled Ukraine in 2013, said in a telephone interview from Paris that the invasion was “unbelievable.”

“My mind is kind of frozen, I don’t know what to do, what to feel,” she said.