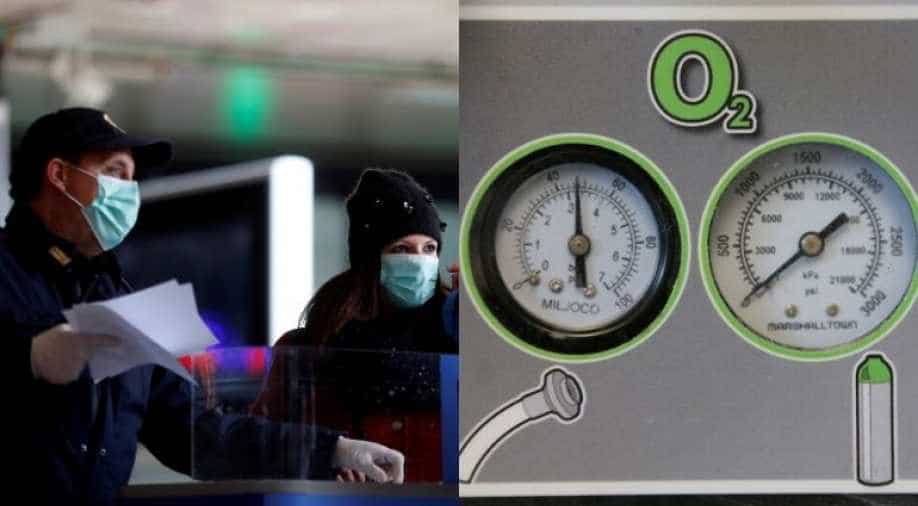 File photo of coronavirus and gauges to regulate oxygen on a ventilator Photograph:( Reuters )

Britain, where 144 people with COVID-19 have died so far, has a shortage of ventilators which can save the lives of those who develop complications after contracting the virus.

Britain said on Friday that engineering companies had come up with an emergency ventilator prototype to fight the coronavirus outbreak, which should be approved for use in hospitals by the end of next week.

Britain, where 144 people with COVID-19 have died so far, has a shortage of ventilators which can save the lives of those who develop complications after contracting the virus. The UK's existing stock of around 5,000-8,000 ventilators is inadequate.

Given such an acute shortage in a country with a population of 67 million, the government scrambled to ask top engineering companies to retool their production to make ventilators.

"More than half a dozen companies have already made one in prototype, to check with us that we are happy with the quality," health minister Matt Hancock said.

Hancock said he hoped the new ventilators would be approved for use in hospitals by the end of next week.

"I would be surprised if it was longer than then," he said.

A source familiar with the manufacturing situation told Reuters that the prototype would be available next week with manufacturing to start in 4 weeks time.

British companies have formed three teams, led by aerospace engineer Meggitt and carmakers McLaren and Nissan to pursue the rapid production of ventilators. European planemaker Airbus has offered help with 3D technology and facilities if other companies need it.

"It's unbelievable. In a matter of days some of these top engineering companies have already turned their hand to this effort and already got their prototypes out," Hancock said. "We need as many as you can possibly make and we will buy them."

Britain faces a "massive shortage" of ventilators that will be needed to treat critically ill patients suffering from coronavirus after it failed to invest enough in intensive care equipment, a leading ventilator manufacturer said.

Britain casts its National Health Service, which offers healthcare free at the point of use for everyone from cradle to grave, as one of its greatest national achievements. Some doctors say it should be better funded and managed.

Britain has asked 65,000 former nurses and doctors to return to work and will deploy final-year medical students and student nurses to fight the coronavirus health crisis, the health ministry said.

"We can’t do it alone, so I am urging all recent former nurses to lend us your expertise and experience during this pandemic because I have no doubt that you can help to save lives," said Ruth May, the chief nursing officer for England.

The Nursing and Midwifery Council is writing out to more than 50,000 nurses whose registration has lapsed in the last three years. The General Medical Council will write to another 15,500 doctors who have left the register since 2017.

Britain's health service is freeing up 30,000 beds by postponing non-urgent operations and providing care in the community for those who are fit to be discharged, and finding up to 10,000 in independent and community hospitals, the health service said.

Hancock also said 150 trucks were being sent to 150 hospitals, about half of all those in the country, to provide more protective equipment such as masks and hand sanitiser.