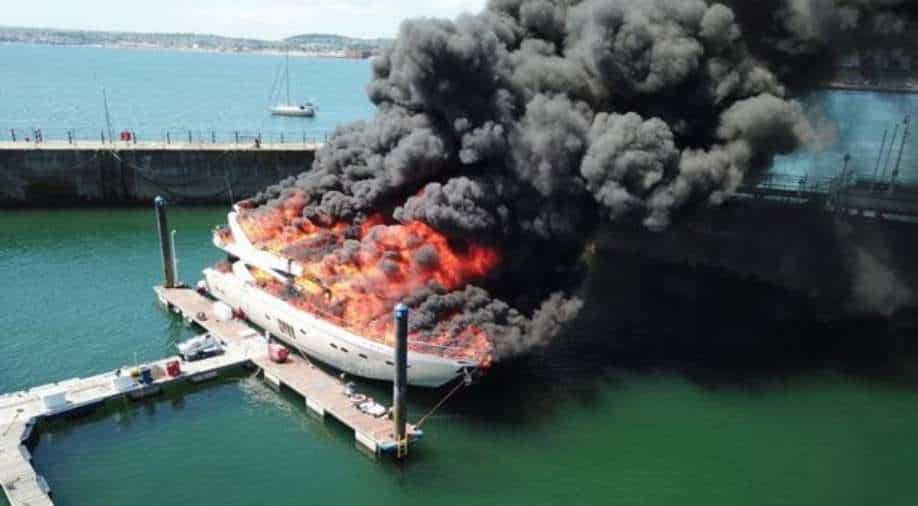 In a statement, Devon and Cornwall Police said no one was reported to be injured

In the United Kingdom, on Saturday (May 28), a massive fire broke out in a superyacht moored at a Devon harbour. The luxury yacht is reportedly carrying 8,000 litres of fuel. Devon & Cornwall Police tweeted that emergency services are currently responding to a yacht fire in Torquay. "We are asking people to avoid the area and close doors/windows due to the smoke and fumes," the tweet added.

Striking images and videos were circulated on social media forums that show a huge plume of thick black smoke rising in the sky.

Local media reports mentioned that fire crews are battling the raging fire at 85ft superyacht said to be worth $7.5 million (£6.5 million).

In a statement, Devon and Cornwall Police said no one was reported to be injured.

It noted, "Police were called at 12.10pm today to Princess Pier in Torquay following reports of a fire on a yacht moored in the marina. The boat is believed to be well alight and had broken from the mooring. It has now been secured by the Fire service near the pier."

Massive fire at #Torquay Harbour. 85 foot super yacht ablaze. No news of any casualties as yet. pic.twitter.com/szOz4zqCF2

A yacht is on fire by Torquay marina it’s like a fire ball! pic.twitter.com/KVDb0K9Woc

Emergency services are currently responding to a yacht fire in #Torquay.

We are asking people to avoid the area and close doors/windows due to the smoke and fumes.https://t.co/zE2DPjg9oH https://t.co/MEn2QlZzP4

To all residents in the #Torquay area near to the marina, please keep your windows and doors closed due to noxious fumes from the yacht fire. Crews are making steady progress extinguishing the fire.

— Devon and Somerset Fire and Rescue Service (@DSFireUpdates) May 28, 2022

Our officers have been checking air quality around Torquay harbour this afternoon following the yacht fire, which was declared a major incident. Thought to be no real issues with air quality, but we're keeping an eye on the situation.

Locals have noted that they heard explosions shortly after the fire began. One witness told Devon Live: "Ropes burnt through and it drifted into pier. Firemen took trolleys and pumps along pontoons but water not reaching."

"Some people are trapped on the other end of the pier and can't get back. Firemen are running along the pier. Still huge flames," the witness added.

As reported by Metro UK, the boat looks like a Princess yacht called Rendezvous. Media reports have mentioned that the expensive boat was built in 2010 in Plymouth.