Trump impeachment row: According to call records, Nunes had frequent contact with Giuliani 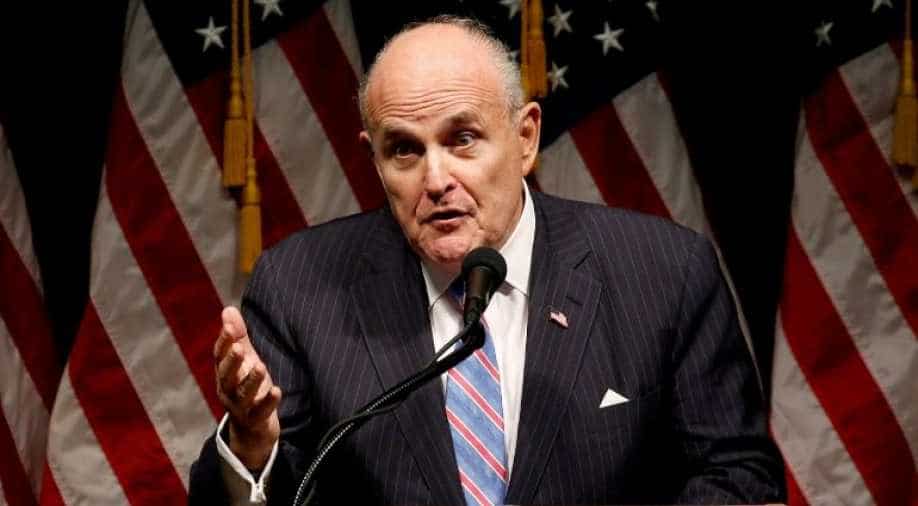 Others with whom Giuliani had phone calls included current and former Nunes staffers, the White House budget office, and a journalist

Previously undisclosed telephone records appended to a 300-page report by the Democratic-led committee showed that Nunes also contacted Lev Parnas, a Ukrainian-American businessman who was helping Giuliani and has been indicted on charges of violating campaign finance law. Parnas has pleaded not guilty.

Others with whom Giuliani had phone calls included current and former Nunes staffers, the White House budget office, and a journalist who promoted conspiracy theories involving Democratic former Vice President Joe Biden and the 2016 US election.

Giuliani's numerous calls with Nunes and aides are significant because, as the top Republican on the committee, the California lawmaker cited those same theories as he led the fight against impeaching Trump.

Asked if he had talked to Parnas, Nunes told Fox News Channel: “It’s possible, but I haven’t gone through all my phone records. I don’t really recall that name. I remember that name now because he’s been indicted.”

"Just on the face of it, I would say Nunes has a lot of explaining to do," Gershman said. "At the very least he should have recused himself and being as aggressive as he was with this lurking in the background, I would say it’s pretty shocking."

Nunes' office did not respond to a request for comment on the phone records.

Neither Giuliani nor his attorney, Robert Costello, responded to a request for comment on the report and on Nunes in particular.

The intelligence panel report, which will form the basis of any impeachment charges, accused Trump of using his power to push Ukraine to investigate Biden in return for a White House meeting for its newly elected president and $391 million in withheld security aid approved by Congress for Ukraine's defense against Russia-backed separatists.

Representative Adam Schiff, the Democratic chairman of the committee, declined to comment specifically on Nunes.

But, he said that it was "deeply concerning that at a time when the president of the United States was using the power of his office to dig up dirt on a political rival, that there may be evidence that there were members of Congress complicit in that activity."

The phone records were obtained from, the report said. The company acknowledged it complied with a request.

Biden is a leading contender for the Democratic nomination to run against Republican Trump in the November 2020 election.

Parnas' lawyer Joseph Bondy said his client was prepared to testify to Congress about the substance of the phone calls.

In an October 5 interview with Reuters, Giuliani said he had been in contact with Nunes about Ukraine, but "not a lot" and that the lawmaker and his staff obtained information on their own.

"We’ve talked about some of it, yes,” Giuliani said. “But we haven’t investigated it together.”

The call records showed that Giuliani maintained more frequent contacts with Washington officials than were disclosed in some two months of private and public testimony by current and former US officials to House committees conducting the impeachment review.

In the hearings, Nunes cited the same unproven allegations supported by Giuliani that Biden tried to curb an investigation into a Ukrainian energy firm on whose board his son was a member. He and other Republicans also referred to the debunked conspiracy theory that it was Ukraine – not Russia – that interfered in the 2016 US election.

The call records showed that over the course of four days in April, Giuliani had calls with Nunes, John Solomon, a conservative columnist whose articles for the Hill newspaper promoted the allegations, and Parnas.

On April 12, the records showed that Parnas called Nunes in the late afternoon. The call lasted for one minute. Less than an hour later, Nunes placed two calls to Parnas that appear to have gone unanswered. Parnas later called Nunes and the two spoke for more than eight minutes, according to the records.

During that same period, Giuliani received three calls from someone at the White House budget office, which in July held up the security aid to Ukraine.

On May 8, Giuliani spoke with Derek Harvey, a member of Nunes' staff and a former White House official, and on May 10 with Kashyap Patel, a former Nunes staff member who is now a senior counterterrorism official at the White House's National Security Council.