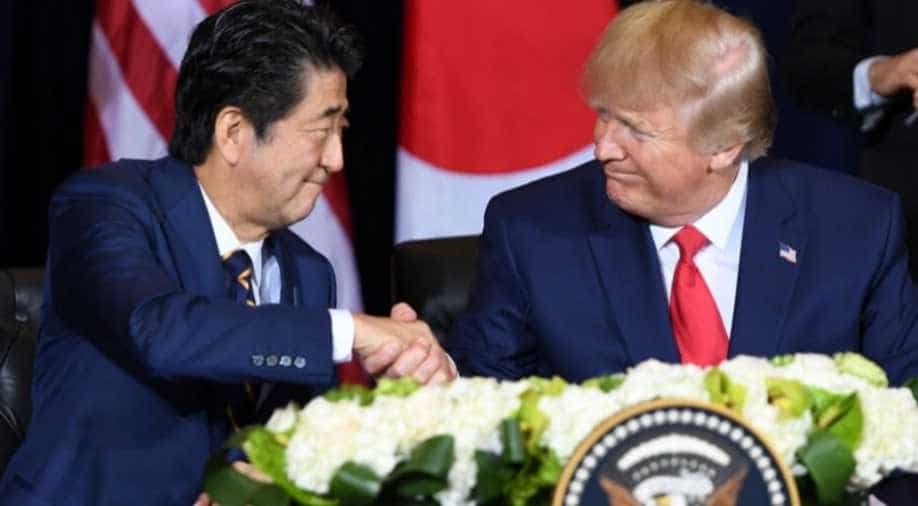 As Trump and Abe met on the side of the UN General Assembly in New York, the Japanese leader said a deal would be 'a win-win solution' for both nations.

US President Donald Trump said on Wednesday Washington and Tokyo had taken a major step towards sealing a comprehensive new trade deal, after a year of negotiations between the global economic powers.

Sitting next to Japanese Prime Minister Shinzo Abe, Trump said the leaders "formally announce the first stage of a phenomenal new trade agreement," adding "this is a big chunk, but in the fairly near future we are going to have a lot more."

As Trump and Abe met on the side of the UN General Assembly in New York, the Japanese leader said a deal would be "a win-win solution" for both nations.

Under the agreement, Japan will cut tariffs for $7 billion in US farm exports, including beef and pork, while reducing mark-ups on purchases of American wheat and barley.

In return, Washington has agreed to cut US tariffs on $40 million in Japanese agricultural goods and to ease tariff-rate quotas on the country's beef, allowing Japan to compete for a greater share of the US market.

The announcement did not resolve the thorny matter of US threats to slap tariffs on auto imports.

But Abe, speaking later at a news conference, said he and Trump agreed that a year-old understanding not to impose auto tariffs remained in force.

"It has been firmly confirmed that no further tariffs will be imposed," Abe said.

Trump, using the threat of tariffs, has sought a comprehensive deal to scale back the US trade deficit with Japan and benefit American farmers -- whose industry helps form a key base of political support.

Trump said a trade agreement would be important to "reduce our chronic trade deficit."

In a separate agreement, US and Japanese officials have also agreed to eliminate duties on digital products like videos, music and ebooks as well as to ensure cross-border that data transfers are barrier-free.

But Tokyo has demanded a firm commitment that Trump will not impose 25 per cent duties on autos, which are vital for the sluggish Japanese economy.

After postponing an earlier deadline, Trump has given himself until November 17 to decide whether to go ahead with the tariffs, a proposal which has alarmed Berlin and Tokyo.

"At this point, it is certainly not our intention, the president's intention, to do anything on autos... on Japan," he said.

The United States had been at a disadvantage since Trump's decision in 2017 to withdraw from the Trans-Pacific Partnership negotiated by his predecessor Barack Obama, which took effect for 11 economies last year.

Meanwhile, a trade agreement between the EU and Japan took effect in February.

"If we had not done this, the United States agriculture would be at a disadvantage to TPP countries and some European countries," Lighthizer said.

"This gets us equal or better than those people."

Abe, who heads Thursday to Brussels, also pointed to the EU pact and said that Japan - long seen as protectionist -- was leading the way on free trade.

"Japan is determined to take the lead in the world's rule-making process as a flagbearer of free trade," Abe said.

Last year, the total US trade deficit with Japan was $58 billion and Japan exported $51 billion worth of cars to the American market, according to government data.

US farmers have borne the brunt of retaliation in Trump's trade wars with China and Europe, which has badly dented exports and left the agricultural sector reeling.

Trump said Wednesday he hoped to sign a "very comprehensive deal" with Japan soon that means "really big dollars for our farmers and for our ranchers."

"We are working on phase two already," he added.

Japan is the US's third-largest agricultural export market, and Japanese consumers bought a quarter of American beef and pork exports last year -- $1.6 billion in pork and more than $2 billion worth of US beef.