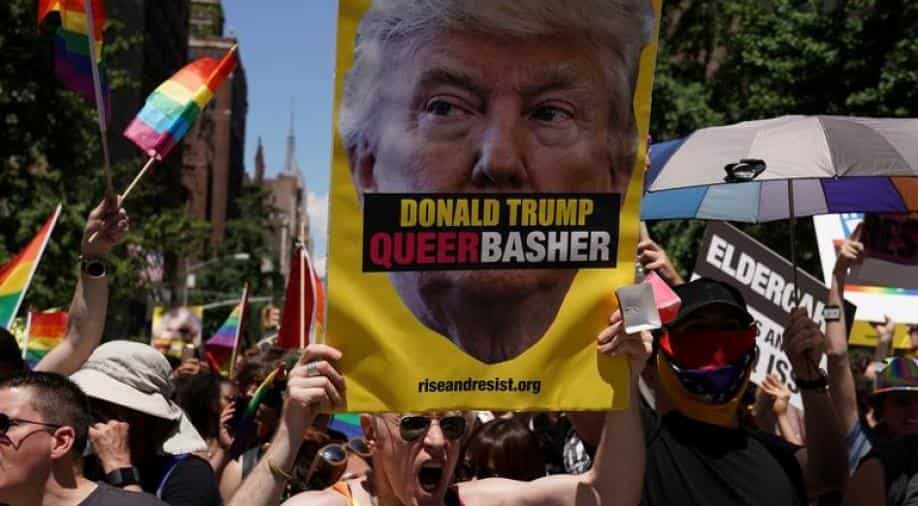 Participants take part in the LGBT Pride March in the Manhattan borough of New York City, US, June 25, 2017. Photograph:( Reuters )

Around 105 families are affected by the decision, of whom 55 are posted at US-based international organizations such as the United Nations, a State Department official said.

In a move to chip away at protections of the LGBTQ community, United States is reportedly denying visas to the partners of more than 100 gay diplomats unless they get married, news agency AFP reported quoting officials on Tuesday.

Around 105 families are affected by the decision, of whom 55 are posted at US-based international organizations such as the United Nations, the report added quoting a State Department official.

Under the new guidelines, diplomats regardless of sexual orientation will need to be married by the end of the year in order for their partners to receive visas.

Under the earlier policy implemented by former secretary of state Hillary Clinton, the United States issued visas to same-sex partners regardless of their marital status.

Diplomats can still obtain visas for their partners if they get married, including if they do so while in the United States.

She noted that only 12 per cent of UN member states allow same-sex marriage.

A UN spokesman said that about 10 staff members in New York were affected and have been asked to show marriage certificates by the end of the year.

"This is a US policy, and as with other national policies in countries where staff is based, we will have to comply with it," said UN spokesman Farhan Haq.