The proper wall never got built, I will get it built, says Trump during State of the Union address 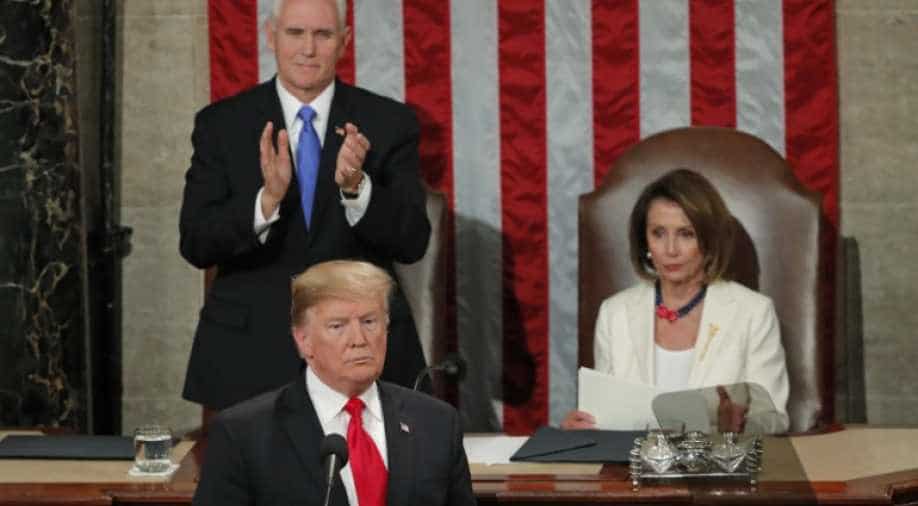 US President Donald Trump during his State of the Union address to a joint session of Congress on Capitol Hill in Washington. Photograph:( Reuters )

"When walls go up, illegal immigration comes down," the US President said.

US President Trump during his State of the Union address said he had called up another 3,750 troops to stop "organised caravans marching towards America".

"I am ready for foreigners to come in largest numbers but they have to come legally," he said while addressing the immigration issue.

"Legal immigrants will enrich the nation."

"Can't let illegal aliens to come into our country," he said while defending his immigration policy.

"The proper wall never got built, I will get it built," he emphasised. "Walls work and walls save lives," he said," so lets compromise and reach a deal to make America safe."

"When walls go up, illegal immigration comes down." "We need a powerful barrier," he told the Congress while pitching for the border wall with Mexico.

"Women have benefitted from economic policies, there are more women in the workforce than ever before." He pointed to women legislators who wore white as a show of solidarity.

The President also explained the tariffs on Chinese goods while saying that he had "great respect" for President Xi. The president said the two sides are now working to put a trade deal together.

"Don't blame China for taking advantage of US," he said. "We respect intellectual property rights," he said which is one of the most contentious issues in the US-China trade war.

"MCA will replace NAFTA, he said. "NAFTA was a trading catastrophe."

"Parties should be able to unite to rebuild America," he pitched to the Congress

"This year Astronauts will go back to space on American rockets, the president said while introducing Buzz Aldrin who walked on the Moon during the Apollo 11 mission in 1969.

"The US economy is growing twice as fast today," he asserted. "We need unity at home to defeat our enemies," the president said.

"Unemployment reached the lowest rate in half a century," he said. "We are not net exporter of energy."