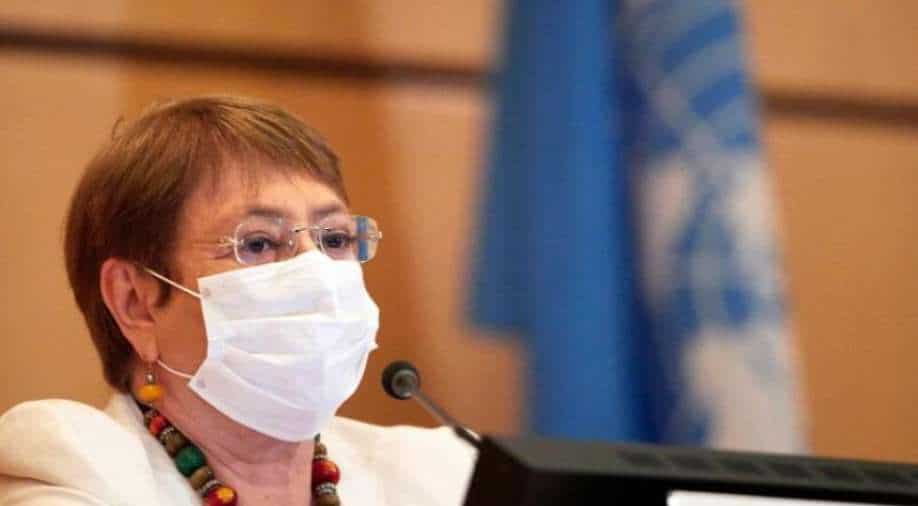 Speaking to the UN Human Rights Council via video-link, Michelle Bachelet presented a damning report on the crisis-wracked country, warning that its "unprecedented" human rights crisis was deteriorating.

Speaking to the UN Human Rights Council via video-link, Michelle Bachelet presented a damning report on the crisis-wracked country, warning that its "unprecedented" human rights crisis was deteriorating.

"The government's systematic crackdown against protesters continues," she said.

"I am worried by increased targeting of journalists and human rights defenders both institutionally and individually," she said.

Last week, two journalists were sentenced to two years in prison for filming a protest last year, while a journalist and a doctor were put on trial accused of disclosing the medical records of a protester who died in detention.

As of February 9, she said, 246 people had been sentenced to prison terms on allegedly politically-motivated charges.

Belarus was gripped by months of unprecedented anti-government demonstrations that erupted after a disputed presidential election last August which saw Alexander Lukashenko claim a sixth term in office.

His opponents say the polls were rigged and that political novice Svetlana Tikhanovskaya, who ran in place of her jailed husband, was the true winner.

Bachelet said her report, which covered the period from last May to December 20, confirmed "numerous and widespread violations".

She pointed to "mass arbitrary arrests and detentions", as well as hundreds of allegations of torture, and intimidation and harassment of journalists, activists and opposition members.

"All these violations, committed with impunity, created an atmosphere of fear," Bachelet said.

She said the Belarus government had responded to the report, acknowledging that preliminary investigation bodies had received 4,644 complaints about the use of physical force.

But, she said, the government had also said that over 1,050 of those complaints were rejected, and had offered no information regarding whether any security personnel had been investigated over allegations of excessive force.

"We understand that not one of the hundreds of complaints for acts of torture and ill-treatment... had led to the opening of a criminal case, prior to our cut-off date of December 20," Bachelet said.

And since then, the situation in the country had worsened further.

"It is essential for the future of the country that respect for human rights, and the broadest possible civic space, be established," Bachelet insisted.

"All those who have been detained for peacefully exercising their rights should be released," she said, also demanding "an immediate end to the policy of harassment and intimidation of civil society and media workers."

Her report urges Belarus to undertake significant legal reform to ensure fair trials, due process and the independence of the judiciary.

Bachelet stressed that her office stands ready to cooperate with the Belarusian authorities "to facilitate the significant transformations" needed.