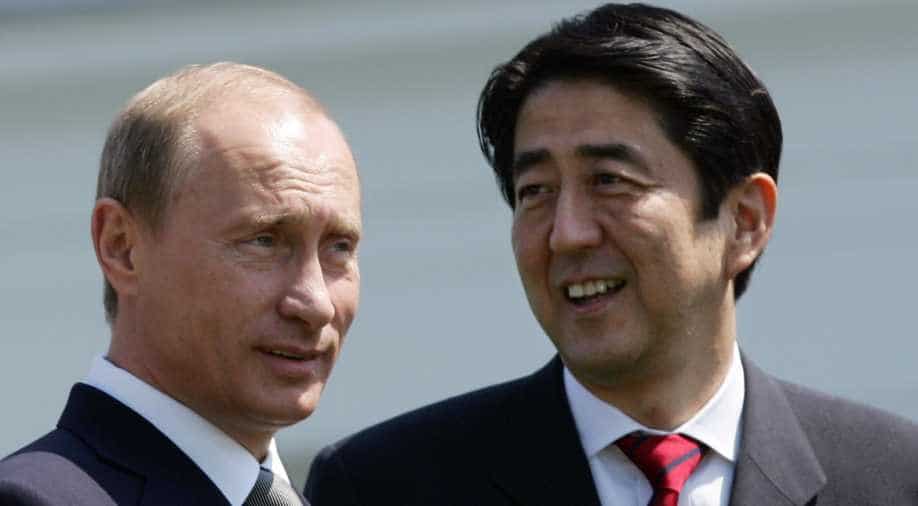 Abe and Putin will meet at a hot spring resort in Nagato. They are expected to sign trade agreements, but solving their territorial row will be harder. Photograph:( Getty )

The two sides are likely to clinch some agreements on economic cooperation in areas from medical technology to energy. But both have sought to dampen expectations of a breakthrough in the feud over the windswept islands in the western Pacific seized by Soviet forces at the end of the war, forcing some 17,000 Japanese residents to flee.

Both have sought to dampen expectations of a breakthrough in the feud over the windswept islands in the western Pacific seized by Soviet forces at the end of the war, forcing some 17,000 Japanese residents to flee

The two leaders will meet on Thursday at a mountainside inn at the hot spring resort of Nagato in Abe's home constituency in south-west Japan, and again in Tokyo on Friday.

Police wearing riot gear dotted the streets in Nagato, where one welcome banner showing a drawing of Putin and Abe shaking hands said "A new start, from Nagato".

Abe has pledged to resolve the territorial dispute, in hopes of leaving a diplomatic legacy that eluded his foreign minister father, and of building better ties with Russia to counter a rising China.

"I want to negotiate as the representative of Japan with the keen feelings of the former residents of the islands engraved in my heart," Abe told reporters before leaving Tokyo.

But a deal to end the dispute over the islands, known in Japan as the Northern Territories and in Russia as the Southern Kuriles, carries risks for Putin, who does not want to tarnish his image at home of a staunch defender of Russian sovereignty.

"The hurdles that remain to be cleared are still quite high," Yasutoshi Nishimura, an advisor to Abe, told Reuters. "On the other hand, they are two strong leaders, so I hope that some broad path forward and direction will emerge."

Russia hopes to clinch deals with Japanese companies as part of an Asian pivot in response to a decision by Western governments, including Japan, to impose sanctions in 2014 over Russia`s role in the Ukraine conflict.

Putin told the Yomiuri newspaper this week that the goal of a peace treaty would be harder to achieve if Russia remained subject to Japanese sanctions.

But Japan`s trade minister, Hiroshige Seko, has ruled out any economic cooperation with Russia that would undermine Group of Seven unity on the sanctions.

Japan has long insisted its sovereignty over all four of the disputed islands off Japan`s northern island of Hokkaido be confirmed before a peace treaty is signed.

But there have been signs it has been rethinking its stance, perhaps by reviving a formula called "two-plus-alpha", based partly on a 1956 joint declaration in which the Soviet Union agreed it would hand over the two smaller islands after a peace treaty was signed.

Over the decades, the two sides have at times floated the idea of joint economic activity on the islands, but how to do that without undercutting either side`s claim to sovereignty has never been resolved.