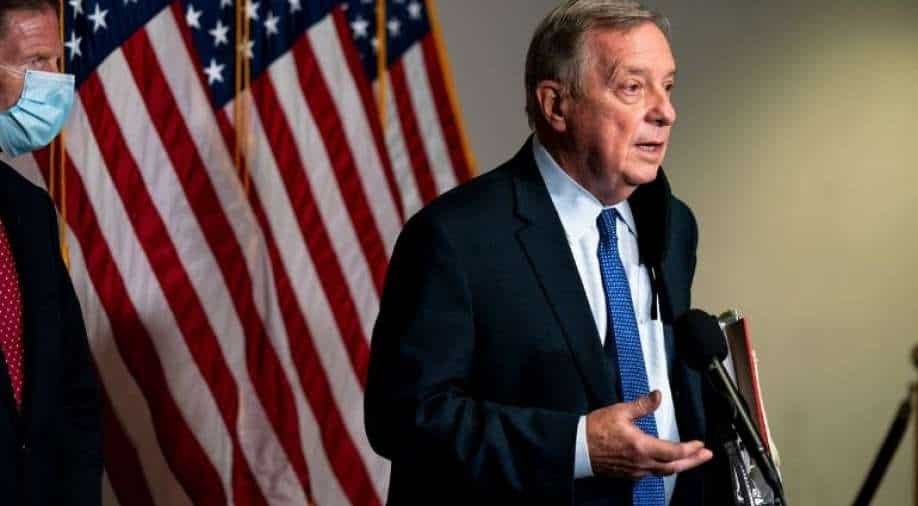 WASHINGTON — As soon as Sen. Richard Durbin of Illinois learned officially Monday that there would be a Democratic opening at the top of the Judiciary Committee, he was on the phone to his colleagues trying to nail down their support for the position.

“Never take anything for granted,” Durbin said of his bid to replace Sen. Dianne Feinstein of California, who stepped aside as the senior Democrat on the panel under intense pressure from progressive activists who deemed her insufficiently aggressive for the job. “I have been through these contests before.”

One fellow Democrat whom Durbin did not talk to was Sen. Sheldon Whitehouse of Rhode Island, who made clear by the next afternoon that he was also interested in the job. Some of the same progressive activists who pressed to shove Feinstein aside said they would be backing him.

The competition set up a rare internal power struggle that reflected broader disputes among Democrats over the direction and approach of their party in a new Congress. As they sort through the results of the election, which handed them control of the White House but left their hopes of taking the Senate hanging by a thread, some are pushing for a new, more combative style and generational change.

Depending on the results of two Senate runoffs in Georgia in January, whoever wins the battle for the post will be either the chairman of the panel or the senior Democrat, with a crucial role to play on a panel that Republicans have turned into a judicial confirmation assembly line.

Durbin is the next in line behind Feinstein on the committee, and Democrats generally adhere to seniority when awarding such posts. The tension in this case partly comes from the fact that Durbin is already the No. 2 leader and holds an important subcommittee chairmanship on the Appropriations panel, which controls federal spending. To some, he is trying to hoard power, potentially at the expense of his own effectiveness in either job.

“Ultimately, this is not going to come down to policy considerations,” said Brian Fallon, the executive director of the progressive advocacy group Demand Justice and a backer of Whitehouse. “It will be about whether the caucus thinks a leadership post and the top spot on a major committee are too much for one member to hold simultaneously.”

Durbin said it was common for Senate leaders to hold a top job on a committee, and his office noted that the whip, the second-ranking official, had routinely done so in the past. First elected to the Senate in 1996, Durbin, 76, who just won his fifth term, has never served as either the chairman or the senior minority member of a full committee. He said he saw this as his chance to influence the direction of a panel he has sat on for 22 years.

Members of both parties have viewed Durbin as an effective advocate for committee Democrats who have chafed at the way Republicans have jammed through nominees in recent years.

“Believe me, I wouldn’t take this on if I didn’t think I could do the job,” he said in an interview this week.

Supporters of Durbin, who has a decidedly liberal record of his own, noted his pursuit of progressive goals on a range of issues.

Under Republican control since 2015, the committee has been the focal point for that party’s drive to confirm more than 220 conservative federal judges, including three Supreme Court justices and 53 appeals court judges.

Against that backdrop, Whitehouse, 65, who declined to be interviewed for this article, has charted out how a network of advocacy groups has taken money from undisclosed donors to support the confirmation of conservative judges who are seen as potentially sympathetic to their interests.

During the confirmation hearing for Judge Amy Coney Barrett in October, Whitehouse devoted his first round of questioning to laying out his case and telling her that she needed to understand the “forces outside of this room who are pulling strings and pushing sticks and causing the puppet theater to react.”

His push has brought him support from those on the left who believe Democrats have not been aggressive enough in challenging Republicans over the judiciary. But they also see Whitehouse, who was just elected to his third term, as someone who would bring a new perspective at the top of the committee.

“I think it needs a little bit of fresh air, new energy,” said Faiz Shakir, a former top Senate aide and progressive activist who served as the presidential campaign manager for Sen. Bernie Sanders of Vermont. Shakir said that his backing of Whitehouse was not a personal complaint against Durbin but that the Rhode Island Democrat had “earned credibility” with his work.

“Giving him the opportunity to lead a committee, I think, would be a good changing of the guard for Senate Democrats to present,” Shakir said.

“It’s an important issue, and I’m glad he is raising it,” said Durbin, who has been highly critical of the Republican handling of confirmations and said he would pursue a reset should Democrats win the majority.

“There clearly has to be a balancing of the courts,” he said. “Most Americans are not looking for all Democrats or all Republicans.”

Durbin said that he believed the committee had drifted from its former role as a Senate powerhouse and that he wanted to reinvigorate it. If given the leadership spot, he said, he would try to refocus the committee on voting rights, executive branch oversight, antitrust efforts and opposing liability immunity that Republicans are pursuing in the wake of the coronavirus pandemic.

Durbin also pointed to his ability to work with Sen. Charles Grassley of Iowa, who will be either the top Republican or chairman of the panel, particularly on a criminal justice overhaul that became law in 2018. Durbin negotiated an agreement with Grassley on reducing sentences for nonviolent offenders despite the Iowan’s own reservations and pressure to drop the contentious provisions to advance the rest of the legislation.

Internal leadership elections are notoriously difficult to handicap since lawmakers are reluctant to commit publicly to a decision that is made in secret. The election will take place in the coming weeks, before the convening of the new Congress early next year.

Sen. Chuck Schumer of New York, the party leader who has to navigate the divide in his caucus, is so far not saying anything about whether he has a preference.

But if there is one thing all Senate Democrats can agree on, it is that they would much prefer that either Durbin or Whitehouse chair the Judiciary Committee rather than serve as its senior Democrat, with the position dependent on the outcome in Georgia.

“We are all pitching in in every way imaginable to help the two candidates down there,” Durbin said.