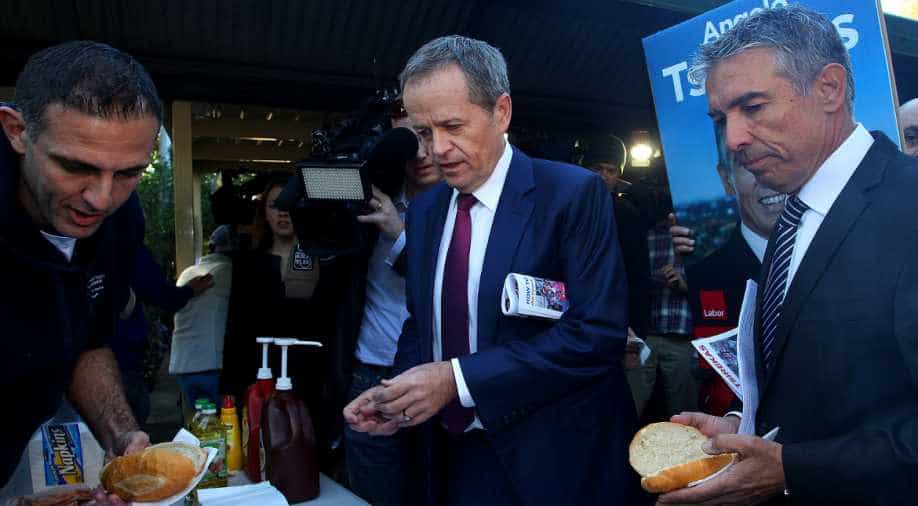 Opposition Leader Bill Shorten orders a sausage bread roll during a visit to a polling booth on July 2.?The website Snagvotes has registered a record number of food stalls for the 2016 election. Photograph:(Getty)
Follow Us
The Australian election is on a knife-edge, but there is one concept uniting voters - the prospect of a sizzling sausage sandwich at the polling station on Saturday.

With voting compulsory in Australia, schools and church halls throw open their doors for the ballot boxes on polling day - providing a willing market for those looking for a snack.

Such is the importance of the humble "snag", in the 24 hours leading up to the polls, Twitter changed its emoji for #ausvotes from a ballot box to a sausage lying on a slice of white bread topped with sauce.

"I came for the sausage and bacon and egg," joked Jaice Pardy, as he tucked into a fresh sandwich for breakfast at a polling station in the Sydney beach suburb of Coogee.

Elections in Australia are held on Saturdays, and voters generally have time to indulge in a treat after voting rather than having to rush off to work.

"Australian democracy is not complete without the aromas of the sausage sizzle," Prime Minister Malcolm Turnbull said as he voted near his upmarket Sydney home, according to the Australian Broadcasting Corporation.

Juliana Vera agreed that the sausage sizzle was part of the nation's voting tradition.

"It gives you something to look forward to," she asid after casting her vote in the election which follows a protracted and lacklustre eight-week campaign.

The website Snagvotes, which was set up to track the location of sausage sizzles, cake stalls and other fundraising activities at polling stations, has registered a record number of food stalls for the 2016 election.

At the last election in 2013, Snagvotes noted 1,470 sausage and cake counters (19 per cent of all polling booths) but by Saturday morning there were at least 1,790 serving the voting public.

"The underlying aim of Snagvotes is to celebrate our democracy and support the hard working volunteers who run sausage sizzles and stalls on election day," said creator Grant Castner.

"For many it's the biggest fundraising day of the year."

Some stalls offer gourmet sausages, others have vegetarian options or coffee.

And for many the choice is much simpler than deciding how to vote, given there are dozens of parties to choose from on the ballot papers.

"The big choice - tomato sauce or bbq sauce? Onions or no? Sausage or hamburger? I love democracy!" tweeted Andrew Hogan.