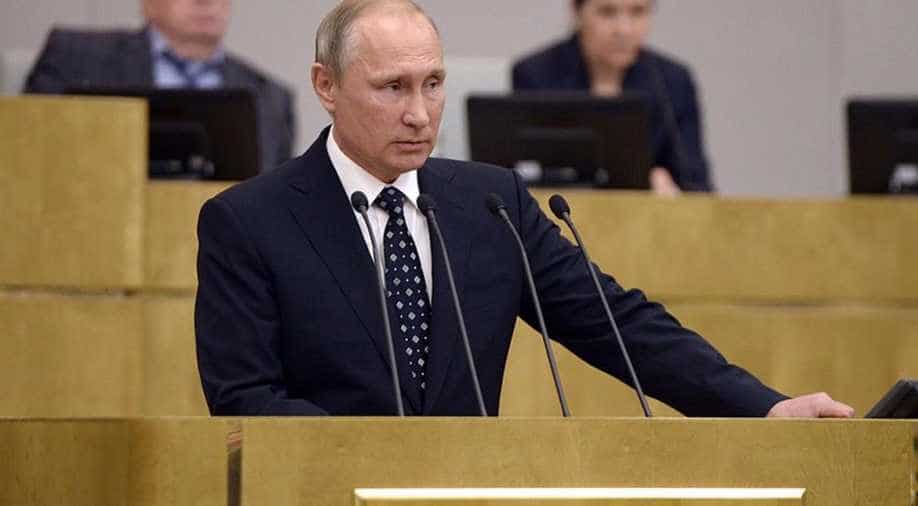 Vladimir Putin: A brief profile of the Russian president Photograph:( Others )

Vladimir Putin, who is set to extend his long rule to 2024 in Russia's presidential election on Sunday, has stamped his total authority in Russia, silencing opposition and reasserting Moscow`s lost might abroad.

The 65-year-old former KGB officer has reimposed the Kremlin's grip over society since taking power 18 years ago after a lawless but relatively free decade following the demise of the USSR.

On the international stage, he has outlasted three US presidents to become one of the globe's undisputed strongmen, thrusting Moscow into a new rivalry with the West by snatching Crimea from Ukraine and launching a pivotal intervention in Syria.

Named the world's most powerful person by Forbes for the past four years running, the judo black belt has built a macho man image helped by publicity stunts that included riding topless on horseback through the Siberian wilderness and darting an endangered tiger.

Bolstered by a slavish state media, he is projected to take around 70 percent of the vote by official pollsters, despite producing no programme and refusing to take part in televised debates.

Supporters laud him as a saviour who restored pride and traditional values to a humiliated nation.

To foes, however, Putin has dragged his homeland further from democracy, has presided over a seizure of the state by a new elite of former secret police cronies and has stoked nationalism in a bid to restore Moscow's lost empire. Putin was born into a working-class family in Leningrad -- now Saint Petersburg -- on October 7, 1952 and cut his teeth in the city's rough-and-tumble neighbourhoods.

"The Leningrad streets taught me one thing: if a fight is unavoidable, you have to hit first," Putin said in 2015.

He fulfilled a childhood dream by joining the KGB intelligence service, getting posted in 1985-1990 to Dresden in what was then East Germany when Soviet power was crumbling.

His political rise began after he returned to work at Saint Petersburg city hall under his mentor, liberal mayor Anatoly Sobchak.

By 1996, he was called to Moscow to work in the Kremlin under Russia's first democratically elected president Boris Yeltsin, who in 1998 made little-known Putin head of the KGB's successor, the FSB.

Battling health and drinking problems, frail Yeltsin in August 1999 named Putin prime minister and his popularity shot up as he oversaw the launch of a second war to crush rebels in the Chechnya region.

When Yeltsin sensationally resigned on New Year's Eve 1999, Putin suddenly took over as president of the biggest country on earth. Buoyed by an influx of petrodollars that saw living standards soar, the Kremlin under Putin forged its own "sovereign democracy" in which the trappings of pluralism -- such as political opposition and civil society -- were subverted.

He has guarded his private life jealously and once famously told journalists to keep their "snotty noses" out of his business.

After three decades of marriage, he divorced his wife Lyudmila in 2013 but rumours of new romance -- including with a former Olympic gymnast -- have not been confirmed.

In line with the constitution, when Putin ended his second term in 2008, he handed power to protege Dmitry Medvedev and moved to become prime minister -- but few doubted who was really in charge.

In 2012, he returned as president in the face of huge street protests.

While the demonstrations petered out after a police crackdown, the spectre of unrest spurred tough new measures to eradicate dissent. Putin, who once decried the collapse of the USSR as the "greatest geopolitical catastrophe" of the 20th century, has ferociously defended Moscow's sphere of influence and also challenged perceived US hegemony.

When crowds in Ukraine ousted Russian-backed leader Viktor Yanukovych in February 2014, the Kremlin faced losing its dominance over a key neighbour.

Within days, Putin ordered special forces to seize the strategic Crimea peninsula and -- after a hasty referendum rejected internationally -- in March 2014 signed off on the region's annexation.

The redrawing of Russia's border sparked the worst standoff with the West since the Cold War and unleashed a wave of nationalism at home that saw Putin's popularity soar.

Soon the Kremlin was accused of masterminding a rebellion in east Ukraine that turned into a festering conflict that has cost more than 10,000 lives.

Despite sanctions pushing his economy into recession, Putin also launched a bombing campaign in Syria to support leader Bashar al-Assad in 2015. It is widely seen as the key factor that tipped the war in Assad's favour.

Putin was then accused of spreading his tentacles much further and Moscow's old foe -- the United States -- found itself in the crosshairs.

After Donald Trump's shock election win, US intelligence accused Putin of ordering a hacking and influence campaign to get Trump to the White House. "Those that lose always look to blame someone else," Putin retorted.