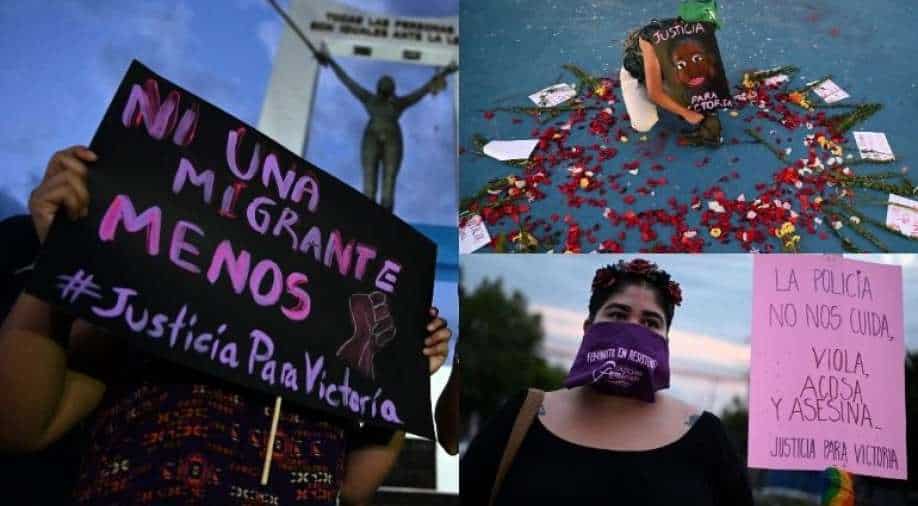 Women hold placards during a demonstration called "Justice for Victoria" for the death of Salvadoran Victoria Esperanza Salazar, who was subdued by the police in Tulum, a resort in the Mexican Caribbean, in San Salvador Photograph:( Agencies )

Mexican President Andres Manuel Lopez Obrador on Monday condemned the killing of a Salvadoran woman at the hands of police and vowed "no impunity" for those responsible.

"She was brutally treated and murdered. It fills us with sorrow, pain and shame," he added, speaking at the inauguration of a virtual international forum on gender equality.

"All those responsible are going to be punished. They are already in the process of being prosecuted and there will be no impunity," Lopez Obrador said.

Mexicans gathered on Monday to demand justice for the killing of a Salvadoran woman in Mexican police custody, who died after a female officer was seen in a video kneeling on her back.

36-year-old Victoria Salazar Arriaza died after her detention on Saturday by four police officers in the tourist resort of Tulum on the Caribbean coast.

Oscar Montes de Oca, prosecutor for the state of Quintana Roo, home to Tulum, said that the police used "disproportionate force" against Salazar, which caused a fatal spine fracture.

Autopsy findings showed Salazar died from a spinal fracture caused by the rupture of the first and second vertebrae, the attorney general's office of Quintana Roo state said.

The office on Sunday (March 28) opened a homicide investigation into Salazar's death, leading to the arrest of three male officers and one female officer at the scene. The four face prosecution for suspected femicide, the office said.

Salazar was a single mother who had worked in Tulum cleaning hotels. She leaves behind two daughters, aged 15 and 16.

Salazar had lived in Mexico since at least 2018 when she was granted refugee status for humanitarian reasons, Mexico's migration institute said.

Her death, which had echoes of the case of George Floyd, an African-American man who died in May 2020 as a Minneapolis policeman knelt on his neck, sparked outrage on social media and calls by El Salvador's president for the officers to be punished.