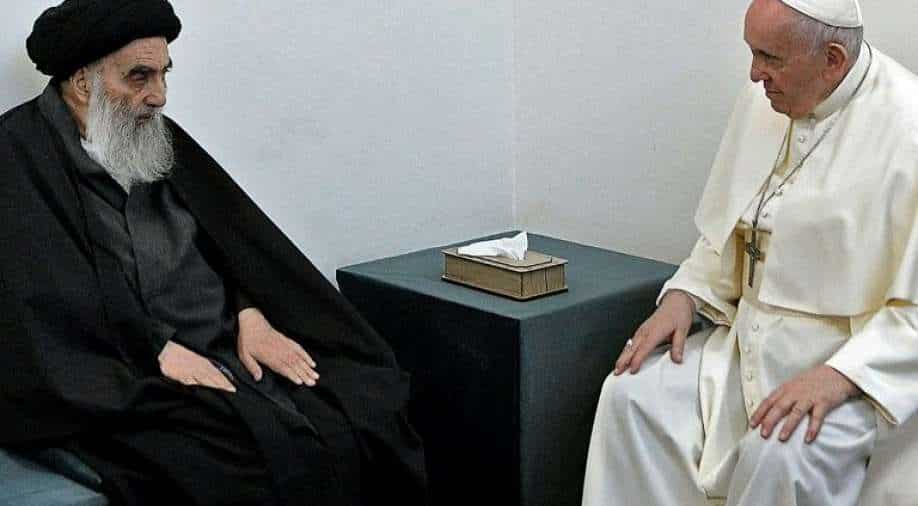 Pope Francis' meeting with the grand ayatollah in Najaf lasted 50 minutes, and Sistani's office put out a statement shortly afterwards thanking him for visiting the holy city.

Pope Francis' meeting with Grand Ayatollah Ali Sistani, one of Shiite Islam's top clerics, on Saturday marked a landmark moment in modern religious history and in terms of the former's efforts to deepen interfaith dialogue.

In the meeting on the second day of the pope's first-ever papal visit to Iraq, Sistani told him that the country's Christians should live in "peace".

Pope Francis' meeting with the grand ayatollah in Najaf lasted 50 minutes, and Sistani's office put out a statement shortly afterwards thanking him for visiting the holy city.

Sistani "affirmed his concern that Christian citizens should live like all Iraqis in peace and security, and with their full constitutional rights," it said.

His office published an image of the two, neither wearing masks: Sistani in a black turban with his wispy grey beard reaching down to his black robe and Francis all in white, looking directly at the grand ayatollah.

Pope Francis later addressed the rich spectrum of Iraq's religious communities at Ur, traditional birthplace of the Prophet Abraham, a central figure in the Christian, Jewish and Muslim faiths, where he made an impassioned plea for "unity" after conflict.

The pontiff's trip to Iraq is an effort to both reassure the country's ancient but dwindling Christian community and expand his dialogue with other faiths.

The pontiff had landed earlier at Najaf airport, where posters featured a famous saying by Ali, the fourth caliph and the Prophet Mohammed's relative, who is buried in the holy city.

"People are of two kinds, either your brothers in faith or your equals in humanity," read the banners.

Francis then headed straight to the desert site of the ancient city of Ur, where Abraham is believed to have been born in the second millenium BC.

"It all started from here," Francis said, after hearing from representatives of Iraq's diverse religious communities.

There were Yazidis, whose ancestral heartland of Sinjar was ravaged by the Islamic State (IS) group in 2014, as well as Mandeans, Kakais, Bahais and Zoroastrians.

Shiite and Sunni sheikhs, as well as Christian clerics, were there. Each was wearing their traditional religious garb, with a dozen different types of robe and headdress on display in the red-carpeted pavilion set up for the visit.

Iraq is a Muslim-majority country of 40 million whose Christian population has shrunk in the past two decades to just one percent, with minorities still complaining of ostracism and persecution.

During his address, the pope said freedom of conscience and of religion were "fundamental rights" that should be respected everywhere.

"We believers cannot be silent when terrorism abuses religion," Francis said, in a message of solidarity with the minorities persecuted under IS rule.

He also made an impassioned plea for "unity" after conflict.

"Let us ask for this in praying for the whole Middle East. Here I think especially of neighbouring war-torn Syria," he said.

Following the prayer service in Ur, the pope headed back to Baghdad to celebrate his first public mass in the country, at the Saint Joseph Cathedral.