Pompeo optimistic progress will be made on North Korea trip 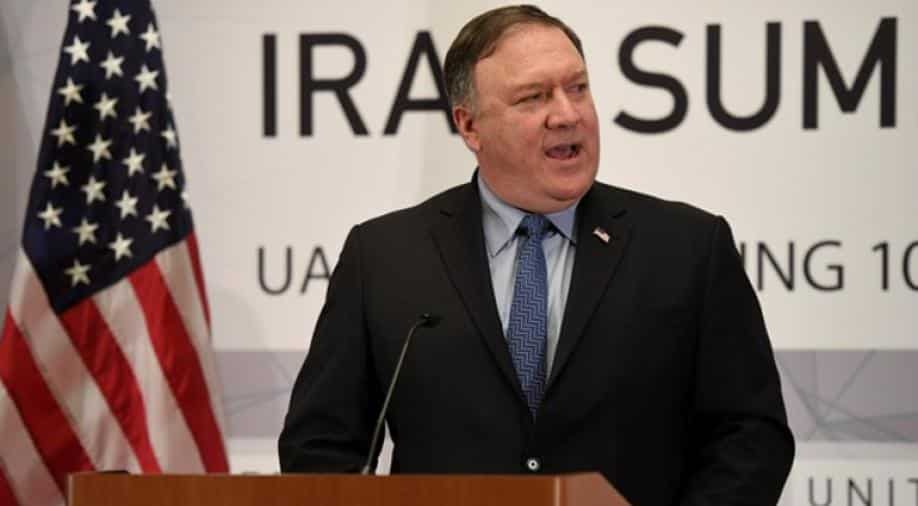 'I'm very happy to be going back to get another chance to continue to advance the commitment that Chairman Kim and President Trump made back in Singapore in the second week of June,' Pompeo told a news briefing at the State Department.

US Secretary of State Mike Pompeo said on Wednesday he was optimistic his planned visit to Pyongyang this weekend would bring progress towards a second summit between President Donald Trump and North Korean leader Kim Jong Un and in building a path to North Korea's denuclearization.

Pompeo declined comment on negative signals from North Korea, that have included demands for a lifting of sanctions and complaints about Washington's apparent reluctance to agree to a declaration to end the 1950-53 Korean War without major concessions.

"I`m very happy to be going back to get another chance to continue to advance the commitment that Chairman Kim and President Trump made back in Singapore in the second week of June," Pompeo told a news briefing at the State Department.

"I`m optimistic that we`ll come away from that with better understandings, deeper progress and a plan forward, not only for the summit between the two leaders, but for us to continue the efforts to build out a pathway for denuclearization."

At an unprecedented June 12 meeting with Trump, Kim pledged to work toward denuclearization of the Korean peninsula, but his actions have fallen short of Washington`s demands for a complete inventory of its nuclear weapons and irreversible steps to give up an arsenal that potentially threatens the United States.

Trump has nevertheless appeared keen on a second summit with Kim, even though recent North Korean statements have suggested the two sides are far from narrowing their differences.

North Korean Foreign Minister Ri Yong Ho told the United Nations last week that continued sanctions were deepening its mistrust in the United States and there was no way Pyongyang would give up its nuclear weapons unilaterally under such circumstances.

Wednesday`s Washington Post quoted South Korean Foreign Minister Kang Kyung-wha as saying in an interview that to break the stalemate, Washington should hold off on its long-standing demand for an inventory of North Korea`s weapons programs and agree to an end-of-war declaration in return for a North Korean pledge to dismantle its Yongbyon nuclear site.

A commentary on North Korea`s official KCNA news agency this week, however, said the declaration should have been resolved half a century ago and it could never be a bargaining chip to persuade it to denuclearize.

Pompeo brushed aside suggestions of differences between himself and Trump over a timeline for North Korea to give up its nuclear weapons.

Pompeo said the day of the Trump-Kim summit he was hopeful that there would be major North Korean disarmament by the end of Trump`s term in January 2021.

In a statement last month, he said the United States aimed for North Korean denuclearization by that date, but a week later Trump said he did not have a time frame.

At Wednesday`s briefing, Pompeo said the statements were "entirely consistent with each other."

"We want it fast, but we`re not going to play the time game," he said, adding that his reference last month to 2021 was repeating a comment made by the North and South Korean leaders at a summit last month in Pyongyang.

"President Trump’s comments are exactly right. This is a long-term problem; this has been outstanding for decades. We’ve made more progress than has been made in an awfully long time and, importantly, we have done so in conditions which continue to give us the opportunity to achieve the final goal," Pompeo said.

Pompeo stressed that in the meantime international sanctions would have to remain in place on North Korea. He said there was unanimous support for this at last week's UN General Assembly, even if Russia and China "had some ideas about how we might begin to think about a time when it would be appropriate to reduce them."