NATO allies not spending enough to shore up defences: Trump 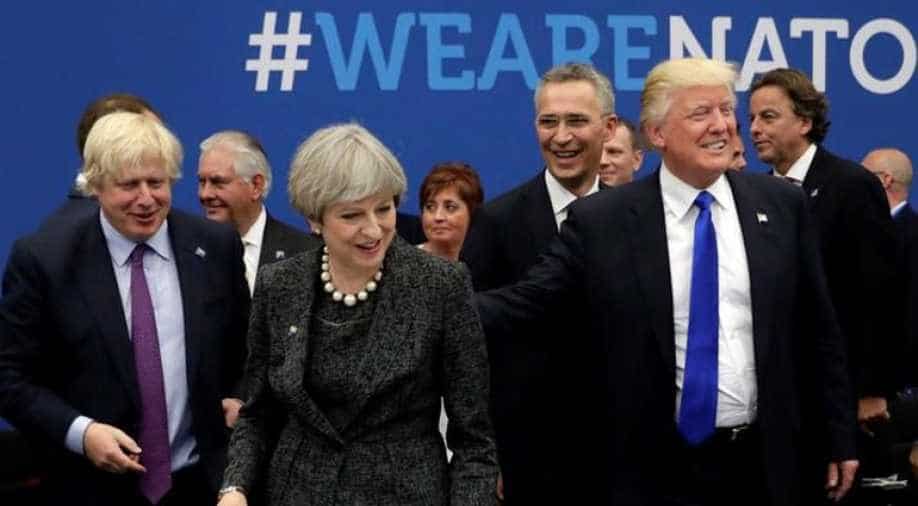 NATO leaders wanted Trump to publicly support the military alliance that he had called 'obsolete' during his campaign. Photograph:( Reuters )

US President Donald Trump on Thursday intensified his accusations that NATO allies were not spending enough on defence and said more attacks such as this week's bombing in Manchester would take place unless the alliance did more to stop militants.

In unexpectedly abrupt remarks as NATO leaders stood alongside him, Trump said certain member countries owed "massive amounts of money" to the United States and NATO, even though allied contributions are voluntary, with multiple budgets.

His scripted comments contrasted with NATO's choreographed efforts to play up the West's unity by inviting Trump to unveil a memorial to the Sept. 11, 2001, attacks on the United States at the new NATO headquarters.

"We will never waiver in our determination to defeat terrorism and achieve lasting security, prosperity and peace," Trump said in the speech before a dinner with leaders.

"Terrorism must be stopped or ... the horror you saw in Manchester and so many other places will continue forever," Trump said, referring to Monday's suicide bombing in the northern English city that killed 22 people, including children.

Trump called on NATO, an organisation founded on collective defence against the Soviet threat, to include limiting immigration in its tasks as well as fighting terrorism and deterring Russia.

NATO leaders wanted Trump to publicly support the military alliance that he had called "obsolete" during his campaign.

But he instead returned to a grievance about Europe's drop in defence spending since the end of the Cold War and failed to publicly commit to NATO's founding Article V rule which stipulates that an attack on one ally is an attack against all.

"Twenty-three of the 28 member nations are still not paying what they should be paying for their defence," Trump said, standing by a piece of the wreckage of the Twin Towers.

"This is not fair to the people and taxpayers of the United States, and many of these nations owe massive amounts of money from past years," Trump said as the other leaders watched.

Nicholas Burns, a former long-time diplomat and ambassador to NATO from 2001-2005, now a professor at Harvard's Kennedy School of Government, said every U.S. president since Harry Truman had pledged support for Article V and that the United States would defend Europe.

"Not so Trump today at NATO. Major mistake," he said on Twitter.

White House spokesman Sean Spicer said Trump was "100 percent" committed to collective defence. "We are not playing cutesie with this. He is fully committed," Spicer said.

Praise was always going to be in short supply after Trump's sharp election campaign criticism of the alliance, which he blamed for not doing more to combat terrorism.

Last year, Trump threatened to abandon US allies in Europe if they did not spend enough on defence, comments that were particularly unnerving for the ex-Soviet Baltic states on Russia's border which fear Moscow might try a repeat of its 2014 annexation of Ukraine's Crimea.

Although he has since softened his tone in phone calls and meetings with Western leaders, Trump's sharp words on Thursday recalled his awkward meeting with Angela Merkel in March, when he pressed the German chancellor for Germany to meet NATO's military spending target.

NATO diplomats planned to placate Trump with a pledge on Thursday to agree to national plans by the end of this year showing how NATO allies will meet a promise to spend 2 percent of economic output every year on defence by 2024.

But Trump increased the pressure, calling that agreement made at a summit in Wales in 2014 "the bare minimum".

"Even 2 per cent of GDP is insufficient ... 2 percent is the bare minimum for confronting today's very real and very viscous threats," Trump said.

He also made his presence felt at his first NATO summit, literally, pushing his way past Montenego's prime minister, Dusko Markovic, whose country joins the organisation next month, in footage that went viral.

Spicer said he had not seen the video but assumed the US president was moving to his designated spot.

NATO nonetheless strived to impress Trump with allied jets flying overhead and a walk through the new glass headquarters, which replaces a 1960s prefab structure.

Trump, a real estate magnate, called the building "beautiful" and joked that he did not dare ask how much it cost.

It was left to NATO Secretary-General Jens Stoltenberg to try to hammer home the message of unity.

"NATO is more than a club, more than an organisation. NATO embodies the unique bond between Europe and North America," Stoltenberg said. "As we raise our flags today, our alliance stands strong united and resolute," he said.

In one nod to Trump, NATO leaders are due to agree later on Thursday for the Western military bloc to join the US-led, 68-nation coalition against Islamic State in Syria and Iraq.