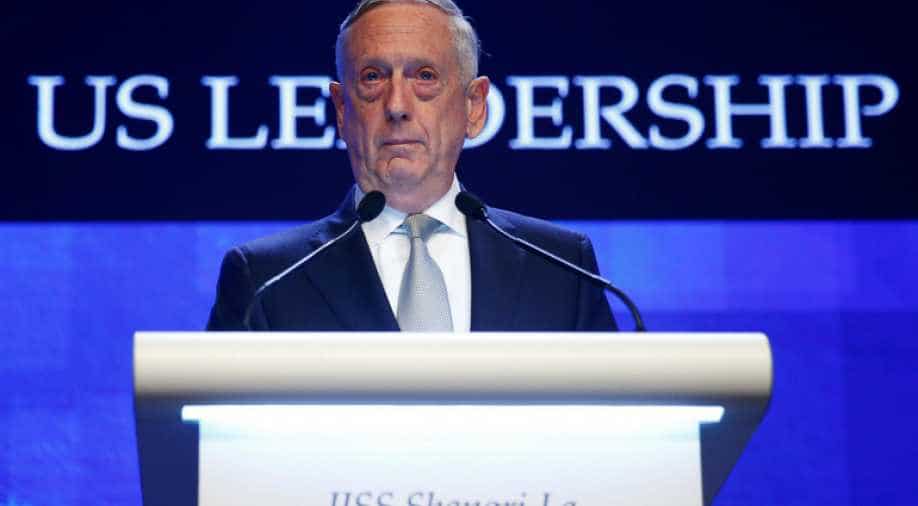 The United States is willing to work with China on a "results-oriented" relationship, but Beijing's actions in the South China Sea call into question its intent and the Pentagon will "compete vigorously" if needed, US Defense Secretary Jim Mattis said on Saturday.

The comments by Mattis, speaking at the annual Shangri-La Dialogue in Singapore, come at a time of increased tension between the two nations in the South China Sea and highlight how President Donald Trump's administration is looking to balance Chinese cooperation on North Korea while dealing with Beijing's activities in the disputed sea.

"China's policy in the South China Sea stands in stark contrast to the openness our strategy promises, it calls into question China's broader goals," Mattis said in prepared remarks, adding that he would be travelling to China soon.

"The US will continue to pursue a constructive, results-oriented relationship with China, cooperating when possible and competing vigorously where we must... of course we recognise any sustainable Indo-Pacific order has a role for China," he said.

Last month, China's air force landed bombers on disputed islands and reefs in the South China Sea as part of a training exercise in the region, triggering concern from Vietnam and the Philippines.

Satellite photographs taken on May 12 showed China appeared to have deployed truck-mounted surface-to-air missiles or anti-ship cruise missiles at Woody Island in the disputed sea.

"Despite China's claims to the contrary, the placement of these weapon systems is tied directly to military use for the purpose of intimidation and coercion," Mattis said.

While the operation had been planned months in advance, and similar operations have become routine, it comes at a particularly sensitive time and just days after the Pentagon disinvited China from a major US-hosted naval drill.

Mattis said this was just an "initial response."

He also reiterated that the Pentagon was committed to working with Taiwan to provide articles and services needed for its self-defence, comments that are likely to anger China.

China's hostility towards self-ruled Taiwan has grown since Tsai Ing-wen from the pro-independence Democratic Progressive Party won presidential elections on the island in 2016. China claims Taiwan as its own and it is one of its most sensitive issues.

Trump said on Friday an unprecedented nuclear arms summit with North Korean leader Kim Jong Un that the United States pulled out of will now go ahead as scheduled on June 12 in Singapore, adding another twist to a high-stakes diplomatic dance.

Mattis only made a glancing reference to North Korea, reiterating that it was a diplomatically led effort and the objective remained the "complete verifiable and irreversible denuclearisation of the Korean Peninsula."

He did, however, seek to calm nervous allies in the region.

South Korea and Japan have expressed concern that Trump may put US security interests ahead of theirs in pursuing a deal with North Korea.

"We are focused on modernising our alliance with both Republic of Korea and Japan, transforming these critical alliances to meet the challenges of the 21st-century," Mattis said.

He said that the United States would work to improve interoperability with allies, work to improve the rule of law and transparent governance that threatens economic growth and increase investment in the region.

"America has expanded its engagement and deepened its connectivity across the region... so make no mistake, America is in the Indo-Pacific to stay, this is our priority theatre, our interests and the region's are inextricably intertwined," Mattis said.