President Donald Trump has suggested a man pushed over by police during protests in the US city of Buffalo last week was trying to "scan police communications in order to black out the equipment". 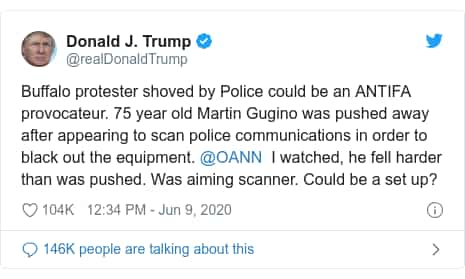 Two Buffalo police officers have been arraigned on felony assault charges after a viral video showed one of them, Officer Aaron Torgalski, 39, shoving Gugino and the other, Officer Robert McCabe, 32, walking past his still body after he fell to the sidewalk. As Gugino tumbles, his head strikes the pavement and trickles blood, according to the video.

Footage of 75-year-old Gugino showed him approaching police lines holding up what appears to be a mobile phone.

One of the police officers then pushes Gugino over, who was later taken to hospital. He left hospital today but was not well enough to comment.

From the clip, it's not possible to tell what he was doing with the phone.

There are plenty of apps claiming to be able to listen into police audio that have been popular during the recent wave of protests in the United States.

But these apps wouldn't allow you to interfere with a police device - or to "black out police equipment" as the president suggested.

Buffalo police say their dispatch channels are not encrypted, and there are even websites that broadcast police calls.

If someone  is attempting to jam police radio signals, that person wouldn't need to be physically close to an officer.

However, most modern radio systems used by emergency services have defences against such jamming, says Professor Alan Woodward, a cyber security expert at Surrey University.

"In any event, even if you were attempting to scan police radios in order to jam them using a mobile phone, which is what the man appeared to be holding, this is not the equipment you would use. You would need much more sophisticated scanning equipment.

"In terms of interfering with police communications frequencies, mobile phones simply don't have components that work at those frequencies," he adds.

Twitter, which has censored previous tweets by the president, said this tweet did not violate its rules.

The claim appeared to first gain traction from a widely shared conservative blog post published on 6 June also claiming that antifa activists use this technique to track police movements or "black out" communication.