Lawyers fed up with paralysed judicial system in Haiti 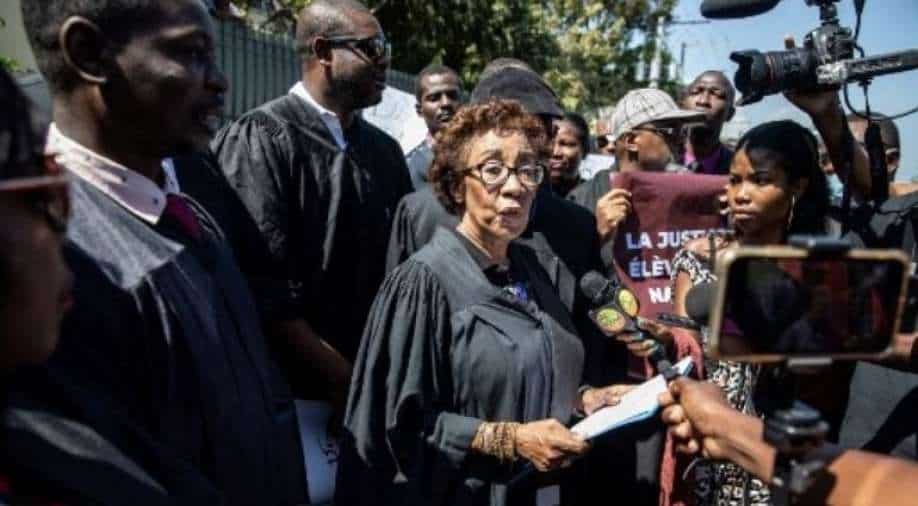 The demonstration of lawyers in the capital Port-au-Prince is an indicator of a judicial system at a standstill, without financial means to function and gagged by the gangs that plague Haiti. Photograph:( AFP )

Legros was among dozens of robed lawyers who demonstrated Friday outside the home of Prime Minister Ariel Henry to complain about crime targeting attorneys in destitute and chaotic Haiti.

In gang-ridden Haiti going to court has become so dangerous for lawyers that they avoid it altogether: at one lower-level tribunal no hearings or trials have been held for months.

"In February we had seven kidnappings within our ranks and one lawyer shot," Marie Suzy Legros, president of the bar association in Port-au-Prince, told AFP.

Legros was among dozens of robed lawyers who demonstrated Friday outside the home of Prime Minister Ariel Henry to complain about crime targeting attorneys in destitute and chaotic Haiti.

Moving the Palace of Justice is one of their main demands. Few lawyers dare even to go to this court complex because it is right next to a slum dominated by Haiti's most powerful gangs.

For years the gangs used to be based in these poorest of the poor areas, by the seaside in Port-au-Prince. But over time they grew in power and spread across the city and country, staging more and more murders and kidnappings for ransom.

So Haitian lawyers are exasperated and feel added frustration with a legal system lacking the resources to work properly.

Addressing the demand to move the court building, the government said it would create a sort of safety corridor manned by security forces so lawyers can actually get to court. But this idea never really got off the ground.

"Sometimes gang members go inside the court looking for accomplices or brothers, depending on what they call them, to help them escape," Legros added.

Watch | Cargo plane splits in 2 as it makes emergency landing

With the court system so paralyzed, overcrowding in Haiti's prisons -- among the highest in the world -- gets even worse.

The prison system has room for 3,000 inmates but holds more than 11,200, 80 percent of whom are simply waiting to go on trial, and some of them have been for years, according to penal officials. And the living conditions are deplorable.

The judicial system will suffer another blow next week when court clerks go on an open-ended strike.

"Our working conditions are precarious in Haiti. There is no equipment, no computers. In some courts there is not even any paper," said Aine Martin, president of a national association of court clerks.

Martin said pay is low -- at courts of first instance, at the bottom of the court hierarchy, as little as 150 dollars a month.

"You cannot live on that kind of wage and this is why there is so much corruption eating away at the Haitian judicial system," said Martin.

And the decrepit physical condition of the courts defies belief.

"Because the gutters are blocked, when it rains, water with garbage flows into the court. The lawyers' offices sometimes flood and there are files that cannot be saved," said Legros.

The Palace of Justice collapsed during the 2010 earthquake that killed more than 200,000 people in Haiti.

"We broke ground on a new Palace of Justice in 2016, but since then nothing has been done," said Legros.

"With no court, the sense of impunity grows and without justice there is no country," she added.

Legros knows only too well how slowly the wheels of justice turn here. She took over the Port-au-Prince bar when her well known predecessor, Monferrier Dorval, was shot and killed outside his home in August 2020.

To this day no arrests have been made in that case.

Even the probe into the murder of president Jovenel Moise in July 2021 is going nowhere.

A fourth investigating magistrate was named to the case in March, but a month later this judge said he had not even received the case file or any resources with which to work.