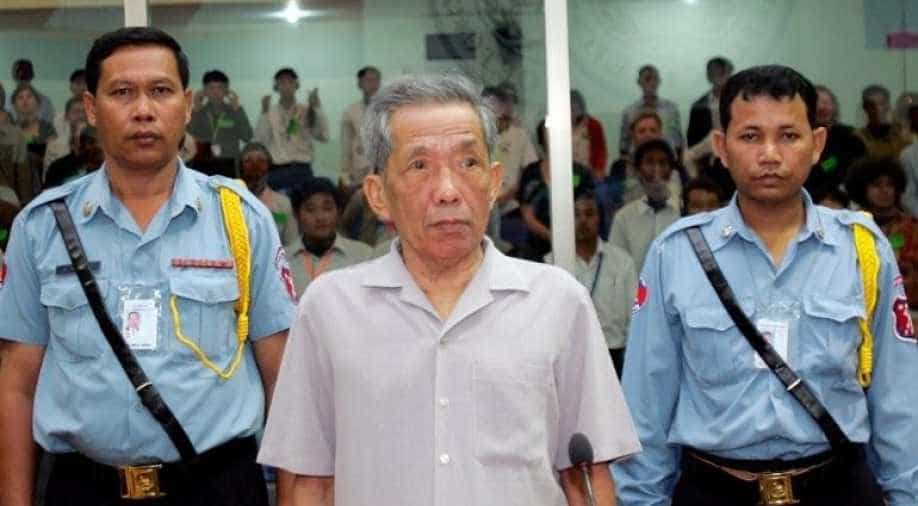 Kaing Guek Eav, better known by his alias Duch, had served as the head of the infamous Tuol Sleng prison and was later convicted of crimes against humanity by a UN-backed war crimes tribunal for his role in the 'Killing Fields' regime.

A former school teacher who became the top torturer for Cambodia's genocidal Khmer Rouge regime, overseeing the deaths of around 15,000 people, died Wednesday at the age of 77.

Kaing Guek Eav, better known by his alias Duch, had served as the head of the infamous Tuol Sleng prison and was later convicted of crimes against humanity by a UN-backed war crimes tribunal for his role in the "Killing Fields" regime.

Born in 1942, the former mathematics teacher became the Khmer Rouge's top interrogator when the ultra-Maoist regime was in power from 1975-1979.

Duch oversaw the torture of thousands of men, women and children in a neighbourhood high school that was converted into a detention centre, extracting false confessions from his victims and sending them to their deaths on the outskirts of the capital Phnom Penh.

After the Khmer Rouge's fall from power, he maintained posts within the communist movement as it battled Vietnam-backed troops.

The jailer turned to Christianity in his later years, and was working for an aid agency in western Cambodia under a false name at the time of his arrest in 1999, when many had long assumed he was already dead.

Duch was the first member of the Khmer Rouge to face judgement before a war crimes tribunal in Cambodia, and was sentenced to life imprisonment in 2012.

His death was "a reminder that justice is a long and difficult" process, said Youk Chhang, director of the Documentation Center of Cambodia, which conducts research on the Khmer Rouge regime.

"Perhaps it can bring some satisfaction to the living, and the fallen can now rest in peace," Youk told AFP.

Duch's testimony at the tribunal served as an important milestone for millions of Cambodians who had suffered under the brutal regime, which killed up to two million during the brief four-year period.

He had maintained a huge archive of photos, confessions and other documents with which UN prosecutors traced the final horrible months of thousands of inmates' lives.

It revealed facets of the regime's secretive workings, such as the repeated purges driven by paranoia from the leadership that its enemies were within its ranks.

Duch became a cadre in 1970 "in order to transform society, to oppose the government, to oppose torture", he said during the trial, and helped to oversee a series of jungle prisons.

After the regime seized power in 1975, he was installed as head of Tuol Sleng, referred to as S-21 by the Khmer Rouge, which he staffed with uneducated teenage boys.

He said they could be easily indoctrinated because they were "like a blank piece of paper".

While he had begged for forgiveness for crimes committed at the jail, he later dismayed survivors by asking to be acquitted on the grounds that he was not a senior member of the Khmer Rouge hierarchy.

"I respectfully and strictly followed the orders," Duch said in one of his final public statements to the court.

Duch had been in and out of hospital for years and had serious respiratory problems towards the end of his life.

He was admitted for treatment again this week and died shortly after midnight on Wednesday, tribunal spokesman Neth Pheaktra told AFP.

The work of the court that Duch faced has long been tainted by its limited scope and the age of its defendants. Only two other people have been convicted by the tribunal.

One of them, "Brother Number Two" Nuon Chea, considered the chief ideologue and architect of the murderous regime, died last year at the age of 93.