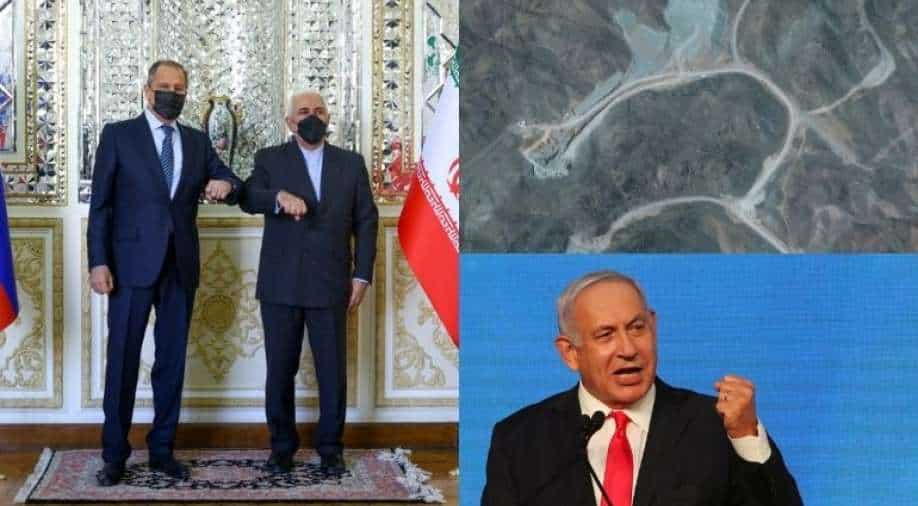 Iran's foreign minister said Tuesday that Israel made a "very bad gamble" if it believed its alleged sabotage at the Natanz nuclear plant would stop efforts to lift US sanctions.

"If they thought that they can stop Iran from following up on lifting sanctions from the Iranian people, then they made a very bad gamble," Mohammad Javad Zarif told a joint press conference with his visiting Russian counterpart Sergei Lavrov.

"The Israelis thought the attack will weaken our hand in the Vienna talks but in contrary it will strengthen our position," Zarif said.

Also read| 'We will take our revenge from the Zionists': Iran blames Israel for Natanz incident

Iran has accused arch-foe Israel of sabotaging its key Natanz nuclear site on Sunday and has vowed revenge for the attack.

The incident occurred amid diplomatic efforts by Iran and the United States to revive Tehran's 2015 nuclear deal with major powers, an accord Israel fiercely opposed, after former US President Donald Trump abandoned it three years ago.

"We expect that it will be possible to preserve the Joint Comprehensive Plan of Action," Lavrov said after talks with Iran's Zarif. He also blasted recent EU sanctions on Iran, saying they sparked "a huge amount of questions".

The incident occurred amid diplomatic efforts by Iran and the United States to revive Tehran's 2015 nuclear deal with major powers, an accord Israel fiercely opposed, after former US President Donald Trump abandoned it three years ago.

Last week, Iran and the global powers held what they described as "constructive" talks to salvage the deal, which has unravelled as Iran has breached its limits on sensitive uranium enrichment since Trump reimposed harsh sanctions on Tehran.

Iranian authorities described the incident a day earlier as an act of "nuclear terrorism" and said Tehran reserved the right to take action against the perpetrators.

On Monday, Foreign Minister Mohammad Javad Zarif explicitly blamed Israel. "The Zionists want to take revenge because of our progress in the way to lift sanctions... We will not fall into their trap...We will not allow this act of sabotage to affect the nuclear talks," Zarif was quoted by state TV as saying.

"But we will take our revenge against the Zionists."

Israel - whose existence Iran does not recognise - has not formally commented on the incident. The White House said the United States was not involved in the attack and had no comment on speculation about the cause of the incident.

In a letter to U.N. Secretary-General Antonio Guterres, Zarif said those involved "committed a grave war crime" and "any power with knowledge of, or acquiescence in, this act must also be held accountable as an accomplice to this war crime."

Iranian nuclear energy chief Ali Akbar Salehi said an emergency power system had been activated at Natanz to offset the outage. "Enrichment of uranium has not stopped at the site."

A spokesman for Iran's Atomic Energy Organisation, Behrouz Kamalvandi, said the facility was hit by an explosion.

"It is a power grid issue. The explosion was not powerful enough to destroy everything but the ceiling collapsed in one of the control rooms," Kamalvandi told state TV.

The incident took place a day after Tehran, which has insisted it wants only peaceful nuclear energy not nuclear bombs from the enrichment process, launched new advanced centrifuge machines at Natanz.

Referring to Iran's first generation of enrichment machines more vulnerable to outages, Foreign Ministry spokesman Saeed Khatibzadeh said that: "all of the centrifuges that went out of circuit at Natanz site were of the IR-1 type".

"Our nuclear experts are assessing the damage but I can assure you that Iran will replace damaged uranium enrichment centrifuges in Natanz with advanced ones."

Modernised centrifuges can refine uranium to higher fissile purity at a much faster rate, helping accumulate a stockpile that could shorten Iran's route to a nuclear weapon, if it chose to develop them, than the IR-1 that still predominates in Natanz's production halls.

The 2015 deal only allows Iran to enrich with up to 5,060 IR-1 machines, in a plant designed to house around 50,000, but it has begun enriching at Natanz with hundreds of advanced centrifuges including the IR-2m.

Despite strong Israeli opposition, US President Joe Biden's administration is committed to rejoining the deal if the Islamic Republic returns to full compliance with restrictions on nuclear fuel production.

Asked by reporters about the Natanz outage, a German Foreign Ministry spokesman, warned that such incidents could adversely affect the nuclear negotiations.

Khatibzadeh said nuclear talks would resume on Wednesday in Vienna. Diplomatic headway has been made, delegates said on Friday. Iran insists all US sanctions crippling its oil-based economy must be lifted first before it stops accelerating enrichment and restores caps on the process.

Israeli Prime Minister Benjamin Netanyahu said on Monday Iran had never given up efforts to develop nuclear weapons and that Israel would never allow Tehran to do so. Israel sees the Iranian enrichment drive as a existential menace.

There have been sporadic episodes of sabotage and outages at Iranian nuclear installations over more than a decade, for which Tehran has blamed Israel, including a fire last July that broke out at Iran's Natanz site.

In 2010, the Stuxnet computer virus, widely believed to have been developed by the United States and Israel, was discovered after it was used to attack Natanz, causing damaging breakdowns of centrifuge cascades that refine uranium.

Iran also accused Israel of responsibility for last November's ambush killing outside Tehran of Mohsen Fakhrizadeh, who was considered by Western intelligence services as the mastermind of a covert Iranian nuclear weapons programme. Israel has neither confirmed nor denied involvement in his death.