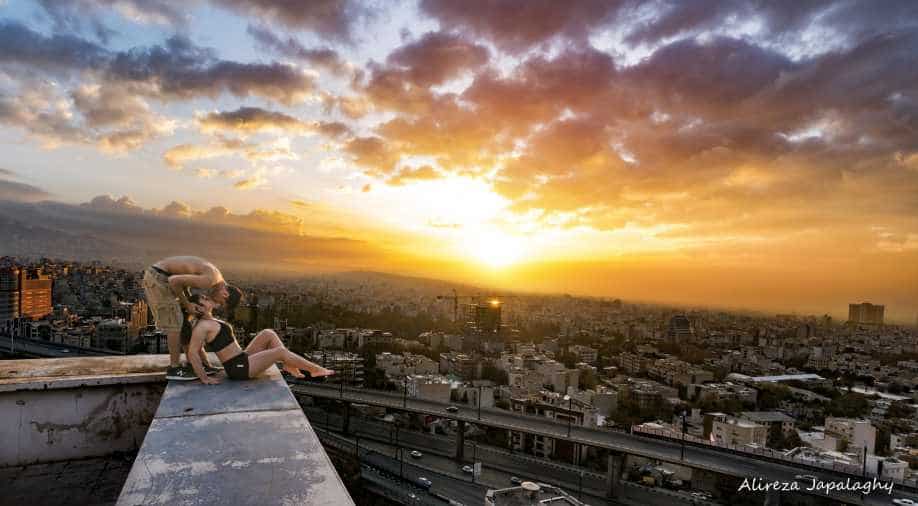 Japalaghy had posted a series of photos and videos last week showing him and an unidentified woman hanging off buildings and kissing. Photograph:( Twitter )

Japalaghy, a Tehran-based parkour athlete with more than 133,000 followers on Instagram.

Iran police faced backlash after it arrested two parkour athletes -- Alireza Japalaghy and a woman whose name -- after their romantic photos of a rooftop kiss and hugs went viral on social media last week.

The parkour athlete has been arrested for committing "vulgar" acts, police said, after he posted photos online of himself kissing a woman on Tehran's rooftops.

"This individual has been arrested by Tehran's cyber police," the capital's police chief Hossein Rahimi was quoted as saying by semi-official news agency ISNA.

"We are against this individual and his companion's norm-breaking and vulgar behaviour and the police and the judiciary will certainly deal with them," he added, without naming the person who was arrested.

Japalaghy, a Tehran-based parkour athlete with more than 133,000 followers on Instagram.

Their custody provoked reactions on social media. People raised questions about how police can be so swift in seizing those who kiss, compared with those who commit crimes such as financial corruption, when the country suffers from international sanctions.

Parkour is an extreme sport born in France in the 1990s that combines the efficiency of movement across the urban landscape with death-defying leaps.

It has a following in neighbourhoods of west Tehran, where high-rise residential buildings are closely connected.

Japalaghy had posted a series of photos and videos last week showing him and an unidentified woman hanging off buildings and kissing.

Under the Islamic dress code, women can only show their face, hands and feet in public and are supposed to wear only modest colours.

In an Instagram video on Monday, he said he had received "suspicious calls" telling him to turn himself in or be arrested publicly.

His brother posted an update on the same account the next day, saying Alireza had been taken from their home and arrested.