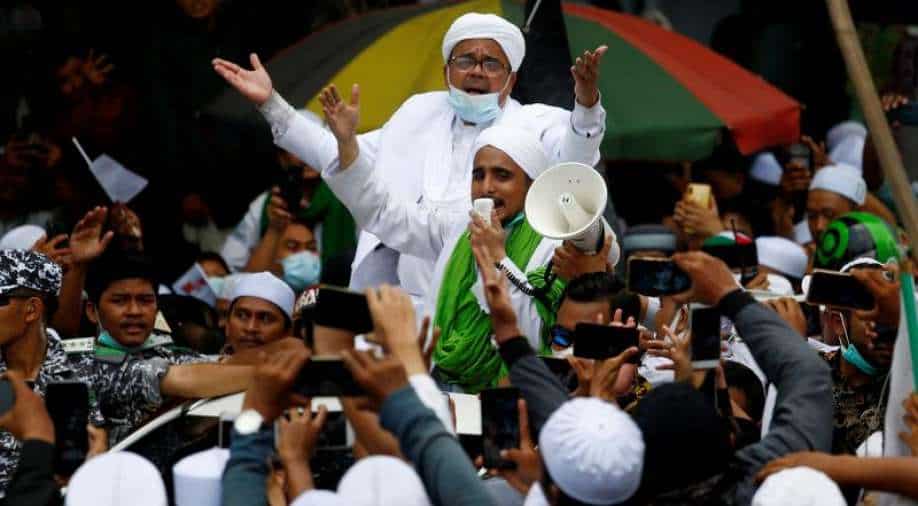 The ban came after last month`s return of the group`s spiritual figurehead, Rizieq Shihab, from self-exile in Saudi Arabia, leading to concern in government that he could be seeking to harness opposition forces against President Joko Widodo, widely known as Jokowi, using Islam as a rallying cry.

The ban came after last month`s return of the group`s spiritual figurehead, Rizieq Shihab, from self-exile in Saudi Arabia, leading to concern in government that he could be seeking to harness opposition forces against President Joko Widodo, widely known as Jokowi, using Islam as a rallying cry.

WHAT IS THE ISLAMIC DEFENDER`S FRONT?

Formed in the late 1990s, the Islamic Defender`s Front, widely known by its Indonesian initials FPI, advocates a strict interpretation of Islam and developed a reputation for raiding bars and brothels, intimidating religious minorities. It once forced the cancellation of a Lady Gaga concert.

It has also been involved in humanitarian work after natural disasters.

Its political sway has risen in recent years, and in 2016 the FPI played a role in mass protests against Jakarta`s Christian former governor, who was jailed for insulting Islam.

WHO IS ITS LEADER?

Cleric Rizieq Shihab, 55, has for years been a controversial figure in Indonesia.

He was jailed in 2008 for inciting violence and left the country in 2017 after facing charges of pornography, and insulting the state ideology, which were later dropped. This week a court ordered police to reopen the pornography case.

His role in 2016 mass rallies raised concern about the rise of identity politics and political Islam.

Rizieq was arrested this month on charges of violating health protocols. He remains in custody.

HOW BIG A FORCE IS ISLAM IN INDONESIAN POLITICS?

With nearly 90% of Indonesia`s population Muslim, Islam has always been important in politics.

However, the 2016 rallies spearheaded by the FPI and other Islamic groups saw the religion take on an increasingly prominent political role.

In a move widely seen as an attempt to appeal to Islamic voters, the president, Jokowi, chose senior cleric Ma’ruf Amin as his vice presidential running mate in 2019.

While Rizieq was overseas, hardline Islamic groups such as the FPI were relatively quiet.

On his return, Rizieq began meeting several key opposition figures and promising a "moral revolution", a potential challenge to Jokowi ahead of elections scheduled for 2024.

WHAT COULD HAPPEN NEXT?

While the decision to ban the FPI is legally sound, analysts say the move may backfire and only lead to new iterations.
Hours after the chief security minister announced the ban, a senior FPI member in Jakarta, Novel Bamukmin, told Reuters the group would fight for their beliefs and "defend the country from traitors". The government could ban the FPI, he said, but they would only reform anew.

Security analysts have said the ban, based on historical precedents in what appears to be a politically motivated decision, would do little to address the views of a sidelined minority.