In a tiny Appalachian village, a beloved festival returns 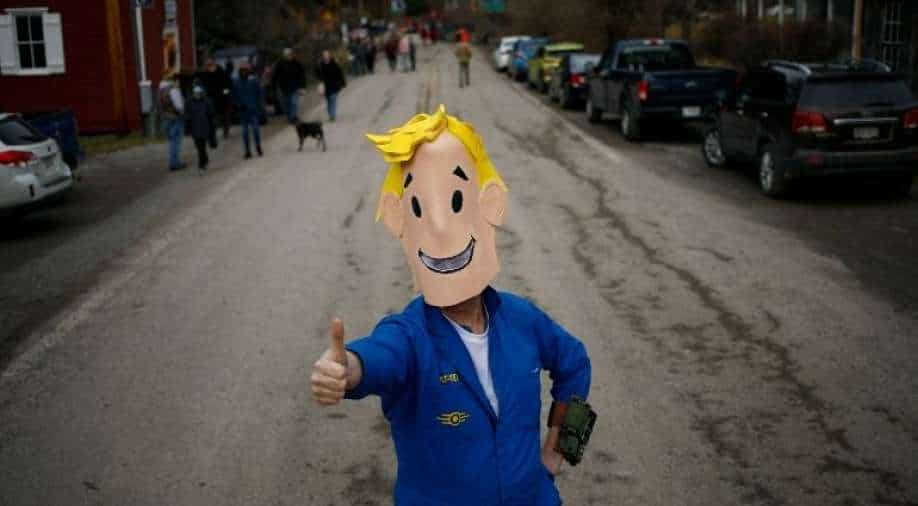 Daniel Valentine of Baltimore in a Vault Boy costume from the online video game Fallout 76 during the Fasnacht celebration, which returned one year after COVID canceled the event, in Helvetia on Saturday (Luke Sharrett/The New York Times). Photograph:( The New York Times )

As the sun set below the ridgelines of the Appalachian Mountains on Saturday evening, revelers donned fantastical papier-mâché masks — a bright red creature with striped horns, a boar with a floral headdress, an autumn leaf — and marched with gusto in an outdoor masquerade ball.

The celebration included Swiss folk songs, tiny Swiss flags and paper lanterns. It culminated in a parade through the streets of the village, led by an effigy of Old Man Winter, which was then thrown atop a raging bonfire, in an effort to hasten the coming of spring.

Helvetia, a community of just 85 people, has hosted Fasnacht for more than half a century. The coronavirus pandemic forced its cancellation last year — the first since 1967 — making this year’s celebration all the more sweet.

Doug Davis, a longtime festival organizer and public-school teacher, seemed buoyed by the festival’s return. “COVID killed the community spirit,” he said. “But here we are, recovering.”

Helvetia, like Fasnacht itself, has Swiss roots. The village was settled in the 19th century by Swiss and German immigrants, and the buildings feature traditional Swiss architecture. Hütte, a traditional Swiss restaurant, serves bratwurst, sauerkraut, Swiss cheese and potatoes. The Beekeeper Inn is booked months in advance for Fasnacht weekend. The Helvetia General Store is also home to a Fasnacht mask museum.

In many parts of Switzerland, carnival — or Fasnacht — season is held in February and March. In Helvetia, it is the weekend before Fat Tuesday and draws enough visitors to swell the number of people in the town to more than triple its population.

While many revelers Saturday said they were relieved to see the tradition return, some described a sense of urgency in their desire to experience what may be West Virginia’s most unusual community celebration. Appalachia, said Joe Holmes, an attendee from Davis, West Virginia, 76 miles away, is “homogenizing like everything else. These little pockets of uniqueness are just drying up. It’s an inevitable result of technology and progress.”

This year’s events were moved outdoors as a COVID-19 precaution. Attendees milled about the banks of the upper Trout Run stream, warming themselves around campfires and enjoying rosettes and Fasnacht doughnuts, traditional Swiss sweets. Visitors lined up to peek inside a log cabin decorated with artifacts from some of Helvetia’s original settlers.

And Saturday evening, as the last bits of Old Man Winter were consumed by flames, festivalgoers joined in an a cappella rendition of the beloved John Denver anthem “Take Me Home, Country Roads.”