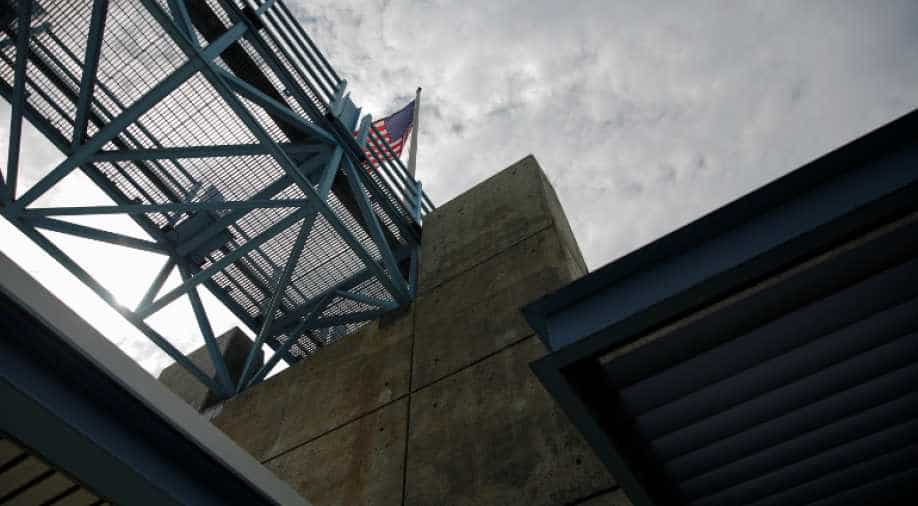 An American flag flies at the National Hurricane Center in Miami, Florida, US August 29, 2019. Photograph:( Reuters )

Hurricane Dorian is expected to strengthen into a dangerous Category 3 storm on Friday with winds of at least 111 mph (178 km/h) as it heads towards Florida's Atlantic coast.

Dorian is forecast to swell later into a powerful Category 4 storm with violent winds topping 130 mph (210 km/h) before it makes landfall on Labor Day.

The entire state of Florida is under a declaration of emergency and Governor Ron DeSantis activated 2,500 National Guard troops with another 1,500 on standby.

No evacuations were ordered as of early Friday, but many are expected as the storm's path become clearer before it makes landfall on Monday.

Dorian was a Category 2 storm early on Friday with winds of 105 mph and its 12 mph (9 kph) trajectory could slow down allowing it to crawl across the warm coastal waters, a recipe for storm fuel.

It is expected to become a Category 4 by Monday on the 5-step Saffir-Simpson scale for measuring hurricane intensity.

Recent weather models from the National Hurricane Center show it smacking into the center of the state.

And then it is expected roll inland to Orlando on Tuesday, as it weakens into a Category 1 storm with maximum winds of 95 mph (177 km/h).

Other NHC weather models show the storm tracking south toward Miami in south Florida before it hits the peninsula, or heading north to the Georgia coast.

With the dangerous winds, the storm is expected to drop 5-to-10 inches of rain on the state with some areas getting as much as 15 inches.

"This rainfall may cause life-threatening flash floods," forecasters said.

US President Donald Trump cancelled a planned trip to Poland, sending Vice President Mike Pence in his place, so he can make sure federal resources are properly directed for the storm.

"Now it's looking like it could be an absolute monster," Trump said in a video posted on Twitter, adding that food and water was being shipped to Florida.

DeSantis said that Floridians need to take the storm seriously.

"Hurricane #Dorian is moving slowly & gaining strength," DeSantis wrote on Twitter. "Now is the time to get prepared & have a plan."

Georgia Governor Brian Kemp declared a state of emergency in 12 counties to assist with storm readiness, response and recovery.

It was unclear if Florida's famed theme parks including Disney World would close, as they have done during previous hurricanes, such as Irma in 2017.

But Harris Rosen, owner of the Central Florida hotel chain Rosen Hotels and Resorts, is offering discount rates at 8 hotels for people and their pets who flee the coast to Orlando, the company announced on its website.

Angela Johnson, a 39-year-old bar manager in South Florida, said: "We're worried. This is not looking good for us."

"We woke up a lot more scared than we went to bed last night, and the news is not getting any better," said Johnson, who manages Coconuts On The Beach, a bar and restaurant on the surfing beach in the town of Cocoa Beach.

Dorian could churn across dozens of launchpads owned by NASA, the US Air Force and companies such as Elon Musk's SpaceX and Jeff Bezos' Blue Origin.

The Miami-based NHC said hurricane watches could be issued for portions of the Bahamas on Friday and the risk of "devastating hurricane-force winds along the Florida east coast late this weekend and early next week continues to increase."

Tropical storm-force winds could be felt in parts of the state as early as Saturday evening.