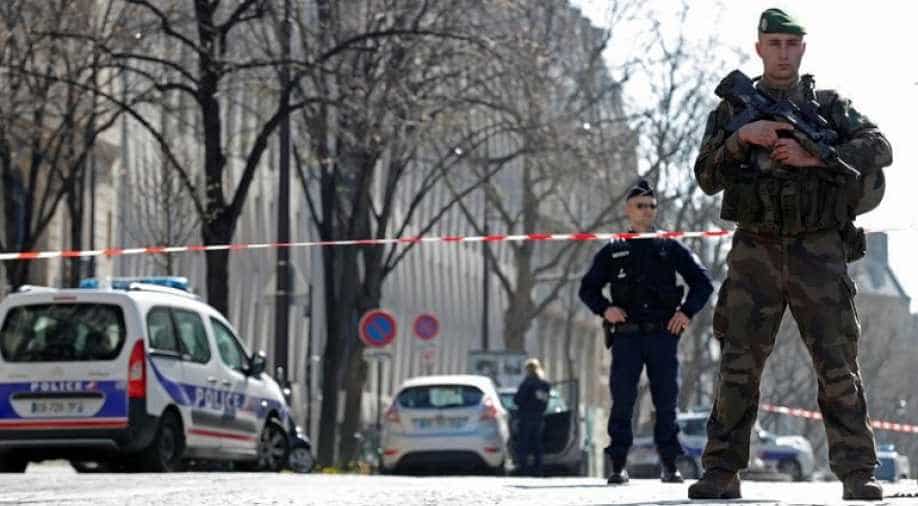 Police and a soldier block the access to the International Monetary Fund (IMF) offices where an envelope exploded in Paris on March 16. Photograph:( Reuters )

Investigators suspect a Greek anarchist group was behind a letter bomb that injured an IMF secretary in Paris on Thursday, the day after an explosive device was found in Berlin, sources close to the probe said.

Fragments of Greek stamps were found at the Paris offices of the International Monetary Fund (IMF) where the letter bomb exploded, leaving the secretary with injuries to her face and hands.

A far-left Greek group called Conspiracy of Fire Nuclei is "likely behind" the Paris attack, a Greek police source told AFP in Athens.

French investigators have told their Greek counterparts that the package was sent from Athens, the official said.

Separately, a source close to the French probe said it was focusing on "an anarchist group".

The Conspiracy of Fire group had earlier claimed responsibility for an explosive device, also sent from Greece, that was discovered by police at the offices of German Finance Minister Wolfgang Schaeuble.

The package was discovered on Wednesday, a day before Schaeuble was due to host his new US counterpart, Steven Mnuchin.

Many Greeks blame Germany and the IMF for imposing years of public sector cuts and reforms in exchange for bailout packages needed to prop up the debt-ridden country.

The group, which is blacklisted as a terror organisation by Washington, sent letter bombs to foreign embassies in Greece and to European leaders in 2010.

In Paris on Thursday, employees were evacuated from the building where the Washington-based IMF has offices near the Arc de Triomphe in the heart of the French capital after the late morning explosion.

The secretary, who works for an unnamed senior manager, suffered facial injuries caused by "shards, as well as a blast to the eardrums" but is out of danger, Paris police chief Michel Cadot said.

"It appears to have been a firework or a big firecracker," he said, describing the device as "relatively rudimentary and nothing like a bomb".

IMF chief Christine Lagarde condemned the incident as a "cowardly act of violence" and insisted the fund would continue its work "in line with our mandate," a statement from her office said.

"We are working closely with the French authorities to investigate this incident and ensure the safety of our staff."

French President Francois Hollande called it an "attack", saying it showed the country was "still targeted".

The Paris letter bomb coincided with a school shooting in the southern town of Grasse that left around 10 people injured and rattled nerves in a country that has suffered a string of terror attacks since early 2015.

"All this leads me to justify the state of emergency" that has been in effect in France since the November 2015 jihadist attacks in Paris, Hollande said.