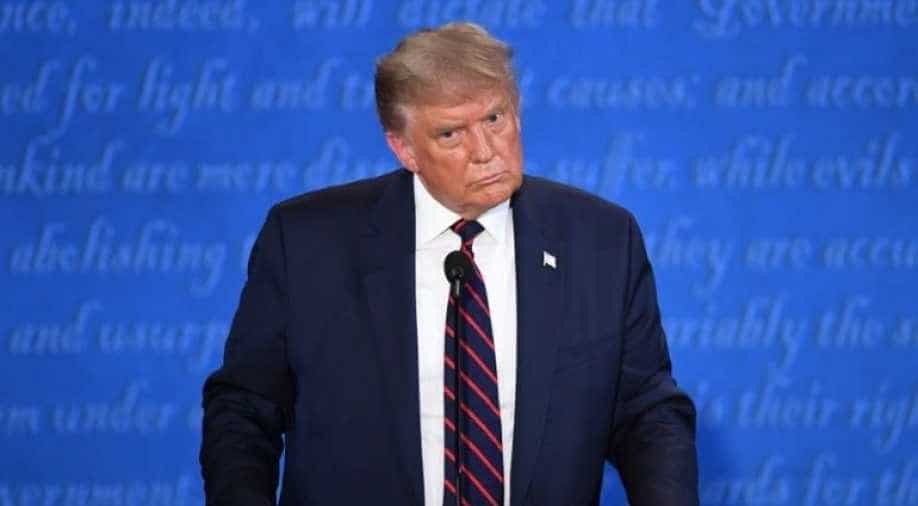 Pressed repeatedly in Tuesday night's debate, Trump gave one of his fullest accountings yet of what scientists say is an escalating climate crisis threatening every aspect of life

President Donald Trump publicly acknowledged that humans bear some blame for climate change, but scientists say the president still isn't dealing with the reality of our primary role.

Pressed repeatedly in Tuesday night's debate, Trump gave one of his fullest accountings yet of what scientists say is an escalating climate crisis threatening every aspect of life. Pushed by moderator Chris Wallace, and at one point by rival Joe Biden, Trump also pushed back on scientific findings that his environmental rollbacks would increase climate-damaging pollution.

The climate change exchange represented a rare microburst of policy discussion from Trump in a loud, nerve-abrading debate. And it ever so lightly nailed down the position of the Republican president on climate change.

''It is a sad statement about the President's history on climate change, but it is a major development to see him clearly acknowledge a role of greenhouse gases from human emissions,'' said Chris Field, director of the Stanford Woods Institute for the Environment at Stanford University.

''It's still outright denial of the science, in addition to denial of the devastating impacts, such as the record wildfires once again forcing evacuations in the Western US,'' said Michael Mann, a Pennsylvania State University climate researcher and a veteran in scientists' battle to make ordinary people and leaders face facts on global warming.

Also read: Biden's 'inshallah' in response to Trump during debate lights up Twitter

Trump said Tuesday that humans ''their tailpipe exhaust, oil and gas production, and smokestack fumes'' are just one of many culprits for the weather-disrupting deterioration of Earth's atmosphere.

''You believe that human pollution, gas, greenhouse gas emissions contributes to the global warming of this planet? Wallace asked.

''I think a lot of things do, but I think to an extent, yes,'' Trump finally responded after Wallace's third question pressing on the point.

Trump had evaded a direct answer to Wallace's previous two questions, instead responding with his administration's standard lines: It wants clean water and clean air, it supports planting trees and it blames worsening wildfires on Western states' failure to rake dead leaves, branches and trees on forest floors. Trump's eventual answer still dodged the key point, which is that burning oil, gas and coal is damaging the climate.

''Humans more than account for all of the climate change over the last 50 years (when the vast amount of the changes have occurred),'' Donald J. Wuebbles, a professor of atmospheric sciences at the University of Illinois, said in an email.

Wuebbles, a lead author in the congressionally mandated National Climate Assessment in 2017-18, said because of a change in energy from the sun, Earth had been on a slight cooling trend before human-made heat-trapping gases kicked in.

Trump's attacks on climate scientists and repeated attempts to undo rules and laws reining in fossil-fuel emissions speak ''louder than any reluctant admissions about our changing climate,'' said Kim Cobb, professor of earth and atmospheric sciences at the Georgia Institute of Technology.

The position Trump took Tuesday is more conservative than that of many lawmakers in his party. Some Republican members of Congress became more outspoken on human-made climate change after Rep. Alexandria Ocasio-Cortez and other Democrats demanding aggressive action on global warming triumphed in 2018 midterms.

Trump's response Tuesday came under pressure, but he did take a position and acknowledge a human role. That compares to past statements from 2012 on in which Trump dismissed the science behind global warming as a 'concept' invented by China to hurt the United States, a 'hoax' and a 'money-making industry'.

As recently as mid-September, he told California leaders struggling with the worsening wildfires associated with global warming that the climate would ''start getting cooler, again. You just watch,'' he added.

On Tuesday, after Trump nodded at a human role in climate change, Wallace asked him why he then had undone the Clean Power Plan. That was a legacy Obama administration climate change effort intended to move US Utilities away from the dirtiest fossil-fuel plants.

''Because it was driving energy prices through the sky,'' Trump responded.

That's an exaggeration. The US Energy Information Administration projects electricity prices would have averaged 2 per cent higher through 2030 with Obama's emissions-cutting power plan, mainly from the initial costs of adding more solar, wind and natural gas production to the electricity mix.

Biden jumped in with his own question, asking Trump why he was axing President Barack Obama's other major climate effort ? much tougher mileage standards that would have boosted electric cars.

The Obama administration said its move would have cut 6 billion metric tons in greenhouse gases. Trump's answers didn't address the climate damage, and he claimed to have given ''big incentives'' for electric cars. In fact, Trump had vowed to eliminate some tax credits boosting electric vehicles, and the White House has said it wants to do away with all incentives supporting renewables as well.

Wallace pressed Biden on his $2 trillion proposal to wean the United States off fossil fuels, citing Trump's claims that the plan would ?tank? the economy and cost jobs. Biden responded by describing massive investments in more efficient buildings, transportation and power plants that he said would produce millions of jobs.

What happens when people contract two strains for coronavirus at once