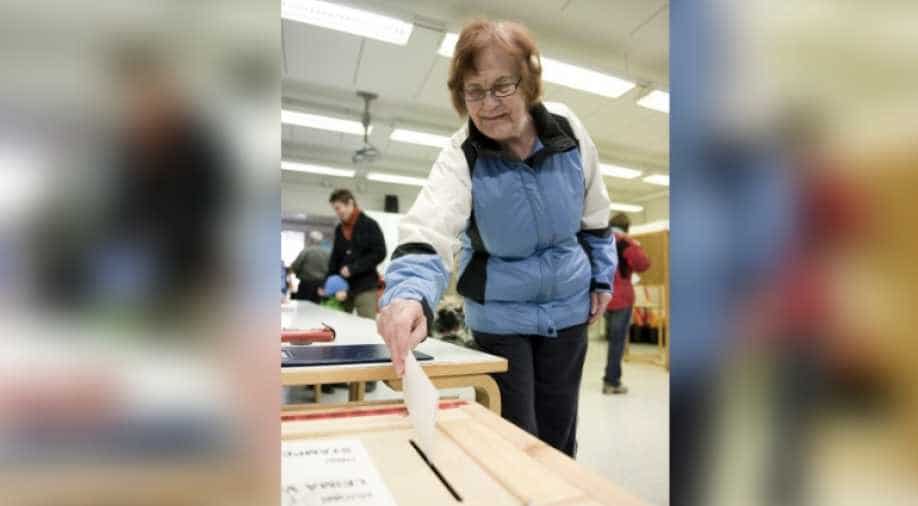 Finns vote at a polling station in a school in Espoo. Photograph:( AFP )

The polls were closely watched to see how the nationalists would do ahead of European Parliament elections in May when many believe they and the eurosceptic camp as a whole could make significant inroads.

Finns can expect a broad, ineffective coalition government for the next four years as the Social Democrats, who narrowly won weekend elections, focus on keeping the surging anti-immigration populists out, analysts said.

The polls were closely watched to see how the nationalists would do ahead of European Parliament elections in May when many believe they and the eurosceptic camp as a whole could make significant inroads.

As Finland's politicos digested Sunday's vote, the big question Monday was what role the far-right anti-immigration Finns Party, which more than doubled its seats in parliament under the leadership of hardline nationalist Jussi Halla-aho, would play.

The Social Democrats came in as Finland's biggest party with 17.7 per cent of the votes, just ahead of the Finns Party on 17.5 per cent.

Halla-aho told Finnish media Monday he did not want to repeat the mistakes his party made in 2015 when it entered government and was forced to compromise on immigration and EU bailouts.

"We were flexible about the wrong things," he told Finland's biggest newspaper Helsingin Sanomat.

"I don't see it as possible that the Finns Party would take part in a government which doesn't clearly commit to reducing humanitarian migration," he added.

On the campaign trail, Halla-aho told supporters he wanted to see the refugee intake reduced to "almost zero".

This would appear to clash directly with the Social Democratic Party's manifesto pledge to make it easier for refugees in Finland to be joined by family members from their home countries.

While Halla-aho said he would be interested in the post of interior minister, in charge of immigration, he was also upbeat in interviews at the prospect of being in opposition.

He told reporters that the huge increase to his party's parliamentary seat-count -- from 17 to 39, just one shy of the Social Democrats -- would give his party sway over any future discussion on immigration, whether or not it was a member of the government.

"Of course they're scared of losing voters to us," he told Helsingin Sanomat.

"It would be quite strange if they didn't take that into account in some way."

Political analyst Sini Korpinen told AFP that, in a bid to keep the nationalists in opposition, a coalition between the leftist Social Democrats and the centre-right National Coalition appeared almost a certainty.

"It's very hard to see that the other parties would say no to working with the Social Democrats because then we would be in a situation with Halla-aho trying to form a government and I just don't see that happening," she said.

"Rinne has been pretty clear that there are substantial ideological differences between the Social Democrats and the Finns Party. It would be astonishing to see them in the same government," she told public broadcaster YLE.

Korpinen predicted the Social Democrats would likely try to build a coalition with the National Coalition, the Greens, the far-left Left Alliance, and centrist Swedish People's Party.

"But the broad coalition Rinne will need to keep the Finns Party out will be difficult to manage and ineffective," Korpinen said.

"A splintered political landscape makes it harder to build a government and nations become harder to lead," Djupsund said.

"When populists win, the EU also becomes hard to govern... then no one cheers, with perhaps the exception of our neighbour to the east," Russia.

Much of the pre-election discussion centred around whether cuts to Finland's cherished welfare state and education system went too far.

Social Democrat leader Rinne has been a staunch opponent of the National Coalition's austerity policies over the past four years.

However, there are signs the two parties may be able to reach some agreement to restrict further belt-tightening, as Orpo has insisted that the economy is now strong enough to allow for some more generous public spending.

Rinne has said he aims to nail down a coalition deal and agree on a programme of policies for the next government by the end of May.