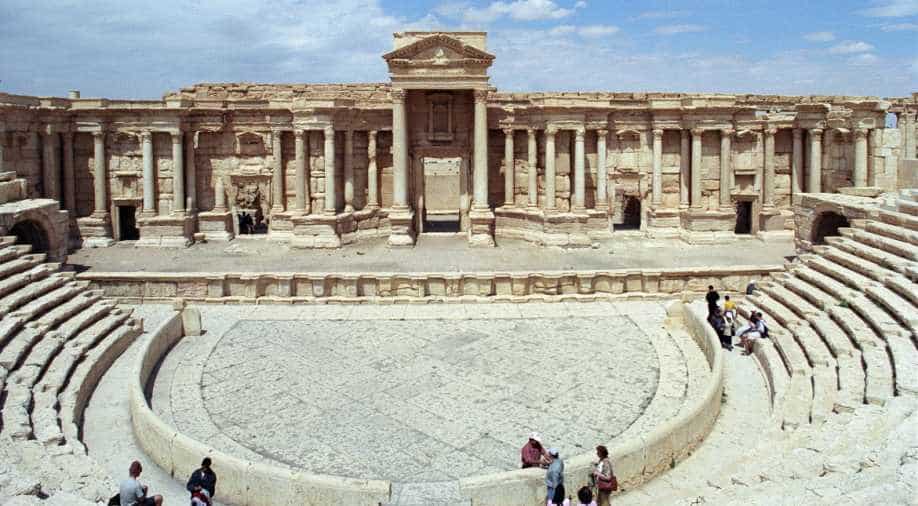 "In the ancient world, anyone entering Palmyra from the western Damascus door would have looked around and said: 'This is the gate to the East'. On the other hand, anyone entering the city from the eastern Temple of Bel would have said: 'This is the gate to the West'. This was Palmyra, a crossroad of cultures, a place where religious tolerance, peaceful co-existence and cultural exchange existed for centuries. It was a blend of Western and Eastern culture.

Professor Maria Teresa Grassi teaches classical archaeology at the university of Milano. She directed the university's excavations in Palmyra since 2007 and her team was the last mission to abandon the site due to security reasons in late 2010.

"Palmyra was a major commercial hub in ancient times. Even goods coming from India and reaching the Persian Gulf were mainly managed by Palmyrenes."

The oriental features of some funerary steles in Palmyra are a testimony of the city's mixture of culture. (Others)

The site is part of the UNESCO world heritage site and is perhaps the most beautiful among the many Syrian archaeological gems. It was a major tourist attraction and visitors came from all over the world.

"Palmyra was, and still is, a pillar of our national and cultural pride," says Fouad Roueiha, a Syrian journalist based in Italy.

The Islamic State invaded Palmyra for the first time in May 2015, destroying ancient statues and blowing up the Temple of Bel and the Temple of Baalshamin.

"The Temple of Bel was original, it was standing since 32 AD. It survived history because it was part of the daily village life: it became a Christian church and then it hosted the village mosque," says professor Grassi. "Palmyra was a place where religious tolerance, peaceful co-existence and cultural exchange existed for centuries. It was a blend of Western and Eastern culture."

The Syrian army retook Palmyra in March 2016, but lost it again to the Islamic State in December. The Russian army recently released drone footage showing the destruction of part of the Roman theatre and the Tetrapylon.

The first thought in professor Grassi's mind when Palmyra fell was "front page news for IS", she explains:"I thought that they (the IS) had chosen the perfect place to get on all newspaper front pages. There are many archaeological sites in Syria, but Palmyra is the most famous and was well preserved. It perfectly served their propaganda operation."

There is also little hope of the damaged buildings ever being repaired. Professor Grassi said, "Had it been an earthquake we could have tried to identify the blocs and recomposed the structures. In this case we are facing explosions and given the friable nature of Palmyra's ancient stones, temples and buildings, it is probably pulverised completely."

"There are advanced technologies which could allow us to rebuild what we have lost in a perfect way, using exactly the same materials. There is an ongoing debate within the scientific community and many do not agree to the reconstruction. There is also the option of leaving the rubbles there as a testimony of what happened."

The Islamic State knows how much Palmyra plays in their favour when it comes to negotiations. They threaten to destroy more if their requests are not accepted. The IS is militarily suffering in both in Iraq and Syria and could become more aggressive and destroy more buildings. They tend to create as much damage as possible while retreating.

They also consider the destruction of all forms of art as part of their mandate.

The ancient Assyrian city of Nimrud, close to the Iraqi city of Mosul, bares the brunt of the IS fury and is a frightening example of what could happen to Palmyra. When they reached Nimrud, IS terrorists sold many archaeological finds on the black market, then they surrounded the site with explosive-filled barrels and blew it up. The effect was devastating.

WION's Daniele Pagani reports that the buyers came from Turkey & Syria, purchasing what Islamic State believed had to be destroyed (WION)

"The destruction in Palmyra is so grave that they go well beyond the destroyers' intentions. They probably do not even know what they have destroyed," says Professor Grassi.

A small part of Palmyra's finds were sold on the black market, but unfortunately too few. "If we really must choose between theft or destruction, theft is definitely a better option. There is, at least, the possibility that some assets will survive and, sooner or later, will be found," says Professor Grassi. "A similar thing happened during World War II. Many pieces of art were stolen during the conflict and then slowly recovered. History teaches us that something stolen, often comes back."

Several Syrians were also part of her team, she says, "Yes, it was a very fruitful cooperation. We learnt from them and they learnt from us. It was very different from the classic archaeological mission where there is a top archaeologist directing all the work. It was more of an exchange."

"We cooperated with many labourers who helped us during the mission. We were usually the only mission during that period of the year and people were eager to work with us," she adds

"Some of them tried to get in touch with us, but we do not know anything about the majority of them. We also do not know if it is safe to call them or to respond to their messages," she ruefully adds.

Her concerns are not baseless: It has been widely reported that the Islamic State controls and monitors all communications in their territory. If someone's phone is found with calls or messages coming from abroad, he or she could face execution.

"I hope they managed to escape. Their life was surely at risk, I am afraid that their constant vicinity to us, Western foreigners, must have definitely played a negative role," says Professor Grassi.