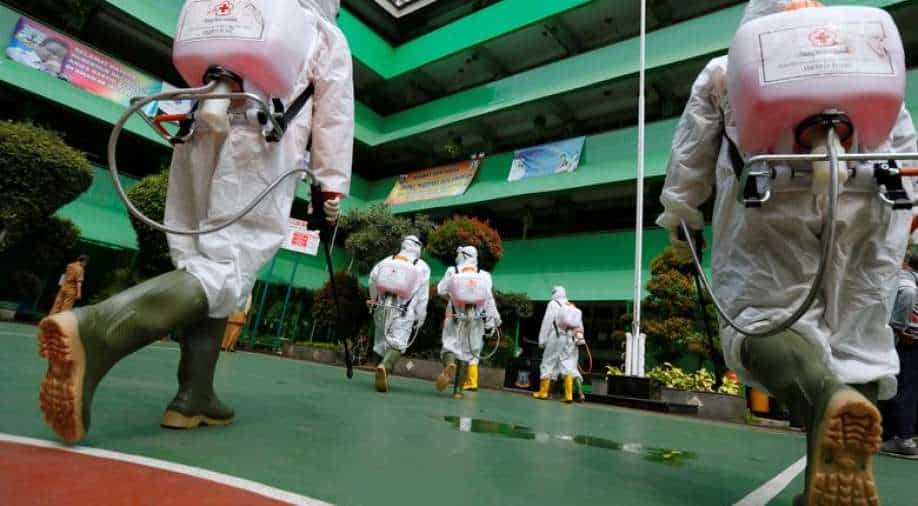 Indonesian government has been forced to step up vigilance in checking the spread of new variant of coronavirus as first case of local transmission of Omicron has come up in capital Jakarta on Tuesday (representative image). Photograph:( Reuters )

In just over 24 hours, as his fellow doctors phoned hospital after hospital in search of a ventilator in Surabaya – Indonesia’s second-largest city and a few hours’ drive away – the doctor and his wife, Sri Martini, would both be dead.

In just over 24 hours, as his fellow doctors phoned hospital after hospital in search of a ventilator in Surabaya – Indonesia’s second-largest city and a few hours’ drive away – the doctor and his wife, Sri Martini, would both be dead.

The death of Dr Sardjono and his wife from COVID-19 has raised alarm bells in the world’s fourth-most populated nation, where the pandemic has steadily gone from bad to worse and is now putting significant strain on the country’s poorly equipped health system.

In the past 10 days Indonesia has posted four daily record high numbers, the highest was Dec. 3 with 8,369 new cases, while local news has runs headlines of more regional hospitals reaching full capacity.

"It seems like the current overcapacity situation is the worst it has been throughout the COVID-19 pandemic in Indonesia,” Halik Malik, spokesman for the Indonesian Medical Association, told Reuters.

Public health experts say Indonesia has struggled since March to get the pandemic under control, now with 557,877 cases and 17,355 confirmed deaths – plus another nearly 70,000 suspected cases – it has by far the highest caseload and death toll in Southeast Asia, and the data shows the situation is intensifying.

In Pamekasan, a modest district on Madura island bordered by the Java Sea, where Dr Sardjono worked for years as a hospital director, there is not one ventilator in town.

But when the 67-year-old radiologist arrived at Pamekasan’s Mohammad Noer Hospital he desperately needed one.

“Everywhere was full. And everything is full here in Pamekasan,” said Dr Syaiful Hidayat, a pulmonologist who treated Dr Sardjono. “Now it is peaking.”

Dr Sardjono’s son-in-law, 41-year-old Arif Rahman, said the deaths of his in-laws highlighted how ill-equipped the nation’s hospitals were to handle the pandemic.

“Ventilators are important,” he said, “In Pamekasan, which is a referral [area] for other regions, it is of course pitiful. Let alone in other places like Surabaya, where it is always full.”

Asked why Dr Sardjono could not find a ventilator, Febriadhitya Prajatara, Surabaya government spokesman, said they had tried too late and the city was not to blame.

But across Java, the most populated island on the planet, other worrying signs are emerging.

In the capital Jakarta, there is also cause for concern.

In helping coronavirus patients find hospital beds from November 27-29, LaporCOVID-19 contacted emergency wards at 69 hospitals and discovered that 97% were full.

“The overcapacity of ICUs in referral hospitals for COVID-19 in some areas indicates the government`s handling of the pandemic is less than serious,” said Irma Hidayana, the initiative’s cofounder.

Indonesia’s COVID-19 taskforce, the National Hospital Association and the Jakarta Health Office have not responded to questions from Reuters about current hospital capacity.

However, speaking in a press briefing Thursday, taskforce spokesman Wiku Adisasmito, said ICU beds were 57.97% nationally as of December 1. Some 1,315 portable ventilators had also been distributed to the regions, he said.

But for Dr Sardjono, one of more than 180 Indonesian doctors who have died from the virus, that made no difference.

Asked why a senior doctor was unable to receive the treatment he needed, Dr Syaiful said there was just not enough room.

“Who do you want to kick out?” he asked, “You can’t do that. It shows that COVID is here and it is real… It can happen to anyone and we won’t have enough beds.”