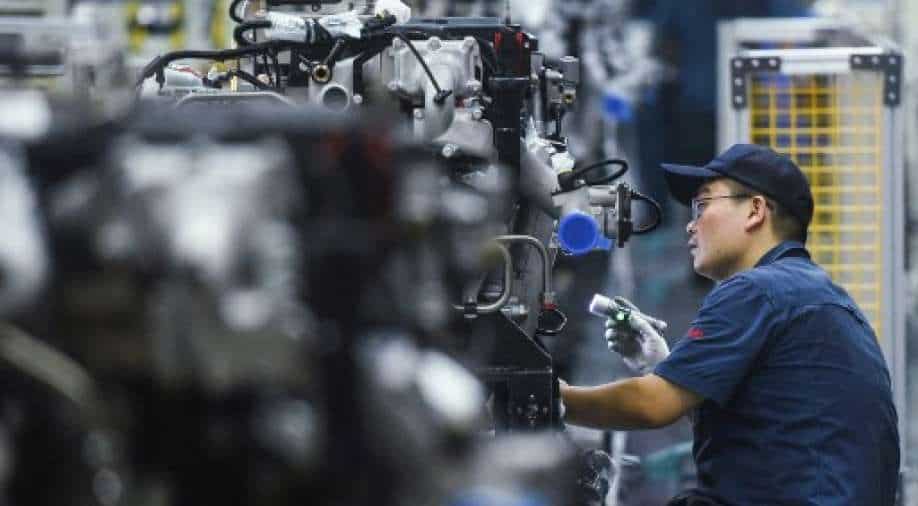 A worker produces heavy truck engines at a factory in Hangzhou on October 18, 2021 Photograph:( AFP )

The National Bureau of Statistics announced Monday that China’s economy increased by 4.9% in the third quarter, compared to the same period last year; the period was markedly slower than the 7.9% increase the country notched in the previous quarter

It has all taken a toll on China’s economy, an essential engine for global growth.

The National Bureau of Statistics announced Monday that China’s economy increased by 4.9% in the third quarter, compared to the same period last year; the period was markedly slower than the 7.9% increase the country notched in the previous quarter. Industrial output, the mainstay of China’s growth, since the early days of the pandemic.

Two bright spots prevented the economy from stalling. Exports remained strong. And families, particularly prosperous ones, resumed spending money on restaurant meals and other services in September, as China succeeded once again in quelling small outbreaks of the coronavirus. Retail sales were up 4.4% in September from a year ago.

Chinese officials are showing signs of concern, although they have refrained from unleashing a big economic stimulus. Their own efforts, though, are part of the current economic challenges.

“Though the government’s economic policies during the past months have some social benefits, they have also somewhat trimmed economic growth lately,” said George Yu, an economist at Renmin University in Beijing.

In recent months, the government has unleashed a raft of measures to address income inequality and tame businesses, in part with the goal of protecting the health of the economy. But those efforts, including penalizing tech companies and discouraging real estate speculation, have also weighed on growth in the current quarter.

The government had also imposed limits on energy use as a part of a broader response to climate change concerns. Now, the power shortages are hurting industry, and the country is rushing to burn more coal.

“The economy is sluggish,” said Yang Qingjun, the owner of a corner grocery store in an aging industrial neighborhood of shoe factories in Dongguan, near Hong Kong. Power cuts have prompted nearby factories to reduce operations and eliminate overtime pay. Local workers are living more frugally.

Urbanization was once a great engine of growth for China. The country built spacious apartments in modern high-rises for hundreds of millions of people, with China producing as much steel and cement as the rest of the world output combined, if not more.

Now, real estate — in particular, the debt that developers and homebuyers amassed — is a major threat to growth. The country’s biggest developer, China Evergrande Group, faces a serious cash shortage that is already rippling through the economy.

Construction has ground to a halt at some of the company’s 800 projects as suppliers wait to be paid. Several smaller developers have had to scramble to meet bond payments.

This could create a vicious cycle for the housing market. The worry is that developers may dump large numbers of unsold apartments on the market, keeping homebuyers away as they watch to see how far prices may fall.

“Some developers have encountered certain difficulties, which may further affect the mood and confidence of buyers, causing everyone to postpone buying a house,” said Ning Zhang, a senior economist at UBS.

The fate of Evergrande has broader import for the long-term health of the economy.

Officials want to send a message that bond buyers and other investors should be more wary about lending money to debt-laden companies like Evergrande and that they should not assume that the government will always be there to bail them out. But the authorities also need to make sure that suppliers, builders, homebuyers and other groups are not badly burned financially.

These groups “will get made more whole than the bondholders, that’s for sure,” predicted David Yu, a finance professor at the Shanghai campus of New York University.

As electricity shortages have spread across eastern China in recent weeks, regulators have cut power to energy-intensive operations like chemical factories and steel mills to avoid leaving households in the dark. It has been a double whammy for industrial production, which has also been whacked by weakness in construction.

Industrial production in September was up only 3.1% from a year earlier, the lowest since March of last year, when the city of Wuhan was still under lockdown because of the pandemic.

“The power cuts are more concerning to some extent than the Evergrande crisis,” said Sara Hsu, a visiting fellow at Fudan University in Shanghai.

The Energy Bureau in Zhejiang province, a heavily industrialized region of coastal China, reduced power this autumn for eight energy-intensive industries that process raw materials into industrial materials like steel, cement and chemicals. Together, they consume nearly half the province’s electricity but account for only an eighth of its economic output.

Turning down the power to these industries risks creating shortages in industrial materials, which could ripple through supply chains.

Assembly plants in industries that use less electricity, like car manufacturing, have not faced the same demands for power cuts. But they face other challenges.

Ongoing coronavirus outbreaks in Southeast Asia have interrupted supplies of some auto parts. There is also a global shortfall of semiconductors, a critical component in cars.

Volkswagen, the market leader in China, said on Friday that its production and sales were falling in the country because of an ever worsening chip shortage and problems in Southeast Asia.

For months, economists have made the same prediction: the fast growth of China’s exports cannot last.

The economists were wrong.

China has essentially maintained its strength in exports ever since its economy emerged from the pandemic in the spring of last year. As much of the world hunkered down at home, families splurged on consumer electronics, furniture, clothing and other goods that China manufactures in abundance.

The export boom, though, is creating another source of tension between the United States and China.

Katherine Tai, the U.S. trade representative, suggested in a speech two weeks ago that China’s export prowess was partly the result of subsidies and other unfair practices. “For too long, China’s lack of adherence to global trading norms has undercut the prosperity of Americans and others around the world,” she said.

But Chinese officials and experts contend that the country’s success is the result of a strong work ethic and consistent, large investments in manufacturing. They are quick to point out that by bringing the pandemic firmly under control within several weeks early last year, China was able to reopen its factories and offices quickly.

“We have very strong supply, but weak demand,” said Tu Xinquan, the executive dean of the China Institute for World Trade Organization Studies at the University of International Business and Technology in Beijing. “So companies have to export.”