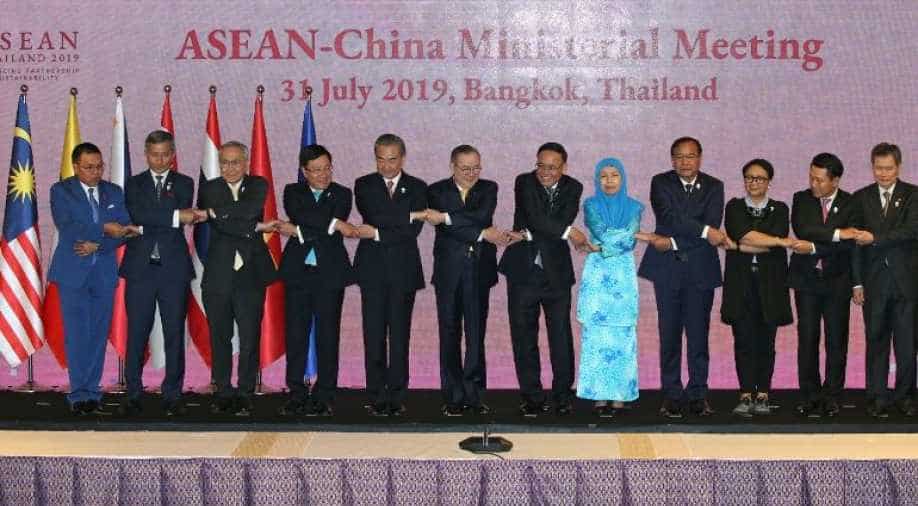 Delegates pose for a family photo at the ASEAN-China ministerial meeting in Bangkok, Thailand. Photograph:( Reuters )

Chinese Councillor Wang Yi touted progress on an eventual Code of Conduct with the 10-member Association of Southeast Asian Nations (ASEAN) after meeting counterparts in the Thai capital.

China's top diplomat on Wednesday warned outside countries not to amplify disputes in the South China Sea, where recent Chinese manoeuvring in the energy-rich waters has rattled regional states and drawn condemnation from the United States.

Chinese Councillor Wang Yi touted progress on an eventual Code of Conduct with the 10-member Association of Southeast Asian Nations (ASEAN) after meeting counterparts in the Thai capital.

Tensions have risen in the South China Sea over recent incidents between Chinese and Vietnamese and Philippine ships, the latest confrontations in a potential global flashpoint where the United States challenges China's sweeping maritime claims.

Wang, who is scheduled to meet US Secretary of State Mike Pompeo in Bangkok, reiterated after meeting ASEAN foreign ministers that China opposes interference by countries outside the region.

"We think non-regional countries should not deliberately amplify such differences or disputes left from the past," said Wang, responding to a question on the involvement of US and other non-Asian countries in the discussions.

"Non-regional countries should also not make use of these differences to sow distrust between China and ASEAN countries."

China recently said US criticism of its role in the South China Sea, including comments by Pompeo, were "slanderous".

Wang said China is in discussions to expand and "institutionalise" joint military drills with ASEAN countries in the region following two previous exercises.

The South China Sea was a key topic for ASEAN foreign ministers.

"Concerns were expressed by some ministers on the land reclamations, activities and serious incidents in the area," they said in a final communique.

The reference to "serious incidents" was stronger than that in the communique after their meeting last year, pointing to the extent to which tension over the region has risen.

China claims large parts of the South China Sea through which roughly $3.4 trillion in shipping passes each year. Countries including Malaysia, the Philippines, Taiwan and Vietnam contest the territorial claims.

China has unnerved the region and angered the United States by installing military equipment and other facilities on artificial islands it has made by reclaiming land and building up reefs and shoals.

Researchers and analysts say the latest standoff between Chinese and Vietnamese vessels could give the United States a new incentive to pressure China.

But they said China was unlikely to want to inflame the situation given its trade dispute with the United States and protests in Hong Kong.

"What China will be more concerned about is if the US tries to rally international support against China's activities," he said.