Can parties help us heal? 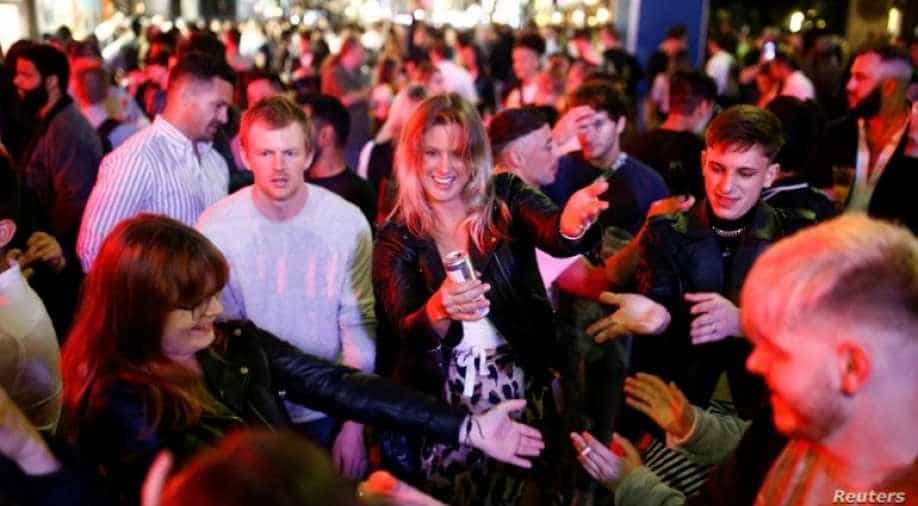 As the pandemic closes in on its second year, people are continuing to experience symptoms of depression and anxiety at a high rate. Many still feel socially isolated and deprived of human touch

On the first night of December, the scene at Nowadays, a bar and club in the Ridgewood neighborhood of Queens, was uncharacteristically tranquil. In place of the usual crowded dance floor, people were lying on blankets in the middle of the club. Instead of bumping beats, the music was calming and the space was filled with candles. Rather than dancing body to body, guests engaged in gentle forms of touch: caressing, hugging and leaning on each other.

They had gathered for an event called “Under the Tongue: A Hibernation Temple and Ceremony,” organised by Nocturnal Medicine, a nonprofit that hosts parties meant to encourage spiritual healing. Together, the group would work to ease each other’s worries about the seasonal transition to winter — the second since the coronavirus outbreak was declared a pandemic in March 2020.

“We noticed, in ourselves and in our friends and in the people we were speaking to, an uneasiness about winter approaching,” said Michelle Shofet, 33, who founded Nocturnal Medicine with Larissa Belcic, also 33. “There was this kind of discomfort, uncertainty, fear, anxiety of returning to the cold, to this time of being shut in.”

As the pandemic closes in on its second year, people are continuing to experience symptoms of depression and anxiety at a high rate. Many still feel socially isolated and deprived of human touch. Some have tried adopting pets to combat loneliness or gone to therapy. Others have sought relief through nonclinical means: by creating new rituals and immersing themselves in new social settings, where conversation and connection can lead to new realizations.

Although some of Nocturnal Medicine’s events are referred to as “raves,” they don’t involve shoulder-to-shoulder dancing or rely on hedonistic drug consumption. Rather, the organisation borrows principles from rave culture such as the power of crowds and the sense of release that parties can provide.

That evening’s offerings included a sound bath, a guided meditation, a candle-lighting ritual and an invitation to interact with an art installation in the center of the dance floor.

The installation, which consisted of sculptures made of tree stumps, horseshoe crab bodies, stone and dirt, was meant to serve as a “visual cue for the concepts of cycles and time,” Shofet said. “The stone is meant to reference geological time scales that are moving much more slowly than us. With horseshoe crabs, which are one of the oldest living species on earth, we wanted to have this sort of ancient creature present.”

Donesh Ferdowsi, 33, an architectural designer who lives in the Fort Greene section of Brooklyn, said that engaging with the installation helped him feel more connected to the earth. “Touching the dirt, holding the logs, putting my hand by the fire, it’s sort of this return to the elemental,” he said. “My whole job is all in my head, so you forget that you’re not just a disembodied brain.”

Ambient music helped set the tone. “I was trying to find tracks that can meet different moods,” said Ian Kim Judd, the night’s DJ. “Things that emanated a lot of light, things that also tend to have some darker edges underneath.”

For Ferdowsi, the fact that the event fell on a Wednesday night, rather than on a weekend, was also significant. “It’s incredible that it’s in the middle of the week, because you can’t wait for the right time,” he said. “It’s in the middle of everything, and that’s how winter is. I wanted to be able to drop everything and go to something that touches on sacredness in a universal way.”

Kelsa Trom, 33 who works with writers and lives in Ridgewood, agreed that the gathering was well timed. “Who doesn’t need a hug before another pandemic winter?” she said, as she waited for the sound bath and meditation to begin. “I’ve been to Nowadays as a club. I haven’t been here as a ritual space. It’s calmer, easier to speak and listen in.”

Shofet said that the decision to host the event at a nightclub — rather than at, say, a meditation center — was intentional. “The dance floor is a space that’s already charged with so much collective energy, it’s already used for this kind of communication with things outside of ourselves like music or other people,” she said. “One of our big underlying goals and desires is to knit together contemporary clubbing and raving with environmental awareness.”

Although attending a healing rave might not solve all of one’s anxieties, the sense of connectedness it may bring about can be beneficial, said Scott Hutson, a professor of anthropology at the University of Kentucky, who has researched the ways raves have helped foster spiritual transformations.

“The therapeutic rave experience comes precisely from being in community, in unity with others,” Hutson said. “The ability to break down barriers between other people and yourself, to sort of be away from your own anxieties and your own ego, to basically unite and forge bonds with a whole crowd of people.”

Trom refers to that as a “beautiful anonymous intimacy.” “It’s a feeling that is hard to come by in New York City, and maybe everywhere,” she said after the event. “It felt like a gift.”