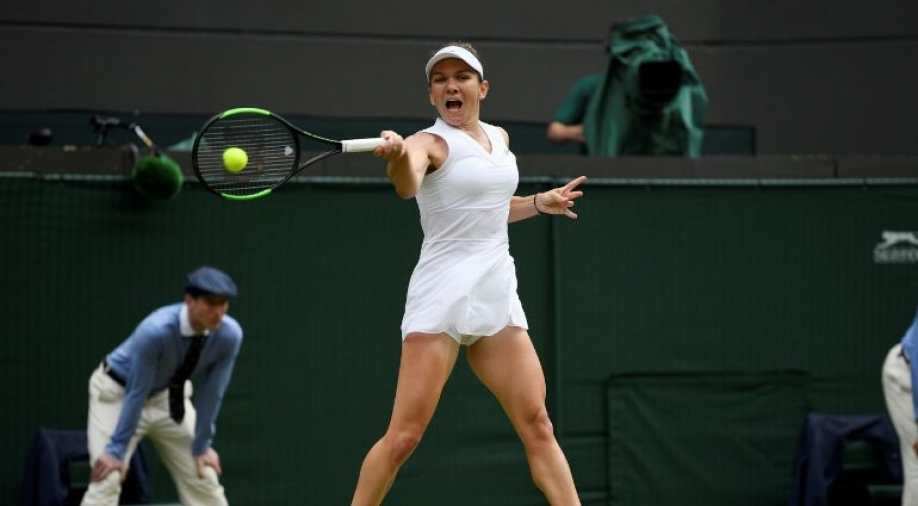 Just as she did in quelling the lively challenge of 15-year-old Coco Gauff on Monday, Halep initially struggled and looked in real danger when 4-1 down and facing more break points in the opening set. However, the Romanian dug in to see off the threat then played her usual percentage tennis as Zhang lost her way.

Seventh-seed Halep faces either Ukrainian eighth seed Elina Svitolina or unseeded Czech Karolina Muchova, who were playing later on Tuesday, as she bids to reach the final for the first time having lost to Eugenie Bouchard in the last four in 2014.

"I was a little bit nervous before the match, a little bit stressed, I knew that she was going to come and hit the ball strongly, Halep said.

"With her the ball doesn't bounce that much so it's really tough to return. But I kept fighting. I knew that I had to be 100 per cent for every ball, then I could break her rhythm a little bit. It happened in the second set."

Zhang, who won the pair's last two meetings in 2016, is ranked 50th and has reached the quarter-finals in only one Grand Slam event - the 2016 Australian Open.

However, she started superbly, serving and returning with depth, power and confidence to break in the second game and race to a 4-1 lead. That looked set to be 5-1 but Halep battled and chased to save four break points in a key game that lasted over 10 minutes and turned the match.

The 27-year-old Romanian, last year's French Open champion, began to find her own rhythm, delivering the calculated, low-risk groundstrokes that wore down American Gauff to hold, then broke back via a double fault.

Zhang's double-handed backhand, so deadly in the opening games, began to pepper the tramlines as the inconsistency indicated by her poor Grand Slam record became evident.

She clung on to get to a tiebreak but was well beaten in it and an early break in the second set put Halep 3-1 up.

Zhang's head then dropped and the errors flowed as Halep rattled through the remaining games at a canter.

"I was happy to make the quarter-finals and I had a really good start today," said Zhang. "I was hitting a lot of winners but after the 4-1 game I made more mistakes and she found a really good rhythm. Everything started to change then."

Halep said she now feels much more comfortable on grass having struggled on many of her previous appearances.

"It's a little bit dangerous when you play on grass because the feet are not really stable but now I've started to feel it, to have it in my hands, to have it in my legs, and also in my mind, which is very important," she said.

"I'm doing things to make the court work for me, like playing a little bit wider, then the ball slides a little bit because it's a grass court.

"I try to adjust myself, my body, to this court. I just feel more confident now."