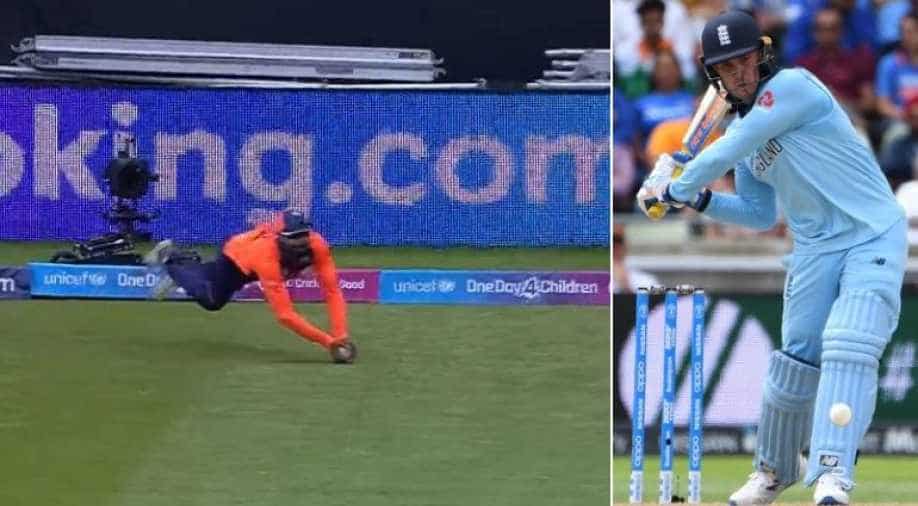 On Kuldeep Yadav's first ball of the fifth over, Roy tried to hit a bit shot on the long-on.

However, substitute Jadeja came in from the long-on boundary and diving forward, he took the stunner.

England vs India, click here to get live updates

Roy looked gutted to not go on but he played a brilliant innings that gave England an ideal start in a must-win match.

The 28-year-old replaced James Vince in the playing XI scored 66 runs off 57 balls in the match.

Wah ! 🔥 What a excellent catch by sir jadeja 😎 _____ The best Fielder for a reason 👏👏👏👏 pic.twitter.com/FLQfKEEaBY

You can watch Jadeja's splendid grab, and all #ENGvIND highlights, on the official #CWC19 app 👇
APPLE 🍎 https://t.co/whJQyCahHr
ANDROID 🤖 https://t.co/Lsp1fBwBKR pic.twitter.com/D85hKFYcAL

Ahead of the match, England had received a boost with Roy returning from a hamstring injury.

Earlier, won the toss and elected to bat under a slightly overcast Birmingham sky.

England need to win their last two group matches against India and New Zealand to qualify for the semi-finals and if they lose then they will have to rely on other results.