As it happened | ENGvIND: England defeat India by 31 runs 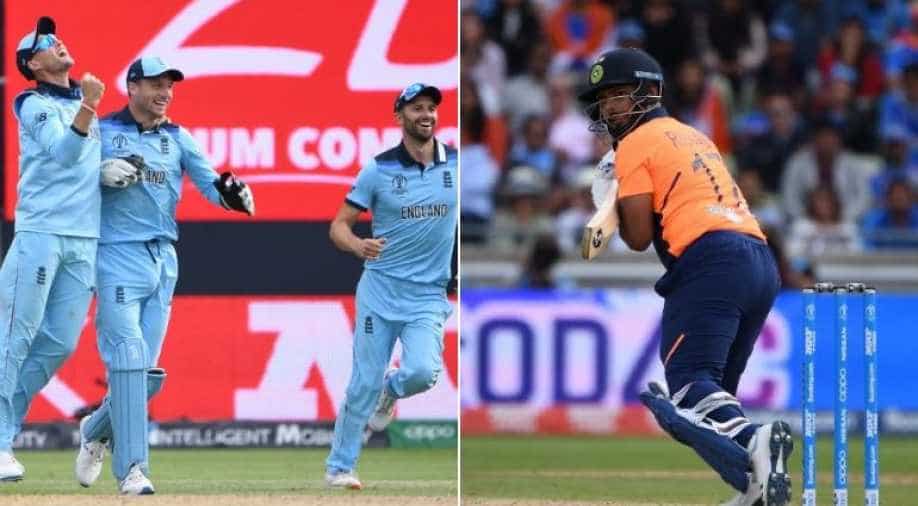 England defeated India by 31 runs in a must-win clash to keep their semi-final hopes alive in the Cricket World Cup 2019.

After opting to bat first under a slightly overcast Birmingham sky, Eoin Morgan-led side set 338-run target for India at Edgbaston on Sunday.

Chasing the same, India scored 306 runs in their allotted 50 overs.

KL Rahul departed without even opening his account but the other opener Rohit Sharma smashed a brilliant century before losing his wicket to Chris Woakes.

Debutant Rishabh Pant looked nervous with his bat in the beginning but scored 32 runs before losing his wicket to Liam Plunkett.

Earlier, Jonny Bairstow smashed a belligerent 111 and Jason Roy returned from a hamstring injury to feature in the tournament's highest opening stand and power England to a commanding total.

Bairstow nearly deflected a couple of inside edges on to the stump and Roy got a caught-behind reprieve on 21 when he gloved Hardik Pandya.

The umpire, however, declared it wide and the Indians deliberated for a while before deciding against reviewing the decision.

England reached the 150-run mark in the 21st over and it took a stunning catch by substitute fielder Ravindra Jadeja in the deep to send back Roy for 66.

Bairstow brought up his eighth ODI century off 90 balls, celebrating by dropping his helmet, stretching out his arms and soaking in the applause.

Mohammed Shami (5-69), who bowled well without luck in the morning, returned to end Bairstow's 109-ball blitz which included six sixes and 10 boundaries.

India stemmed the run flow in the 30-40 over period but Ben Stokes (79) provided the late assault to help England get close to the 350 mark.

Jofra Archer's final over. 7 runs from this over.

Mark Wood's last over. 6 runs from this over.

Jofra Archer comes back into attack.

5 singles from this over.

Mark Wood come back into attack to bowl his penultimate over.

He gave 9 runs in this over.

Liam Plunkett's final over. 7 rund from this over and took a wicket also.

He had replaced Moeen Ali in today's playing XI and did his job perfectly.

Hardik Pandya's short but crucial innings comes to an end.

Next batsman is Kedar Jadhav.

Jofra Archer comes back into attack.

Adil Rashid comes back into attack.

A good over, 5 singles from this one.

9 runs from this over, including a boundary from Pandya's bat on the 5th ball of the over.

8 runs from this over and he took a wicket also.

This time he's at it in the field, taking a superb catch under pressure on the leg-side boundary.

Liam Plunkett to Pant, caught out by Chris Woakes.

Pant World Cup debut and he scored 32 runs off 29 balls.

A brilliant over for India.

Including 3 consecutive boundaries from Pandya's bat.

Including a magnificent boundary on the last ball of the over.

A good over by Chris Woakes. He took the crucial wicket and gave 6 runs.

After scoring 102 runs, Sharma caught out by Buttler.

Two beautiful boundaries from Rishabh Pant's bat on the third and last ball of the over.

This is Wood's 7th over.

Liam Plunkett continues from the other end.

three singles and 1 double in this over.

Plunkett's 7th over and just like the previous one, 11 runs from this over as well.

Mark Wood comes back into attack.

A bit expensive for England as 11 runs came from this over.

Virat and Rohit were looking good at a moment but a good captaincy decision by Morgan as he brought Plunkett and he took a very important wicket.

Virat Kohli out. He departed after scoring 66 runs.

Liam Plunkett to Kohli, caught out by James Vince.

Next batsman is Rishabh Pant.

India are beginning to accelerate. What can England do to find a breakthrough?

Is today the day he gets to 💯?#ENGvIND | #TeamIndia pic.twitter.com/vmJAUG4pqF

India's run rate is very slow, now the onus on these two players, Virat and Rohit to accelerate the innings.

While, one the other hand, England are looking for wickets to break this crucial partnership.

Rohit Sharma was clocked on the helmet by Liam Plunkett earlier. Thankfully he's OK to carry on!

Rohit was stuck on his head but he carried on.

In previous five overs, they scored 19 runs without losing any wickets.

Not an ideal start Team India was looking for as they lost a wicket while chasing the mammoth target.

Chris Woakes got the breakthrough.

KL Rahul departed on a duck.

A very important wicket for England.

Woakes to Rahul, caught and bowled.

Next batsman is Virat Kohli.

KL Rahul and Rohit Sharma are at the crease to start the run chase and Chris Woakes has launched the bowling attack.

Jasprit Bumrah took his first wicket of this match...

Bumrah to Ben Stokes, caught out by Jadeja.

Shami to Woakes, caught out by Rohit Sharma.

Next batsman is Liam Plunkett.

Shami has taken a five-wicket haul.

And he is on a hat-trick.

Shami missed his line and length in this over but eventually got the breakthrough.

Shami to Buttler, caught and bowled.

Projected score from here is 321 if England score 6 runs per over.

Ben Stokes brings up his fourth fifty of #CWC19 💪

It's been a blistering knock from just 38 balls 🔥

However, two of his previous three half-centuries have ended in defeat. Will the story today be different?#ENGvIND pic.twitter.com/Uftp3HBtp0

Fifty up for Ben Stokes!

It's his 19th half-century in ODI career.

Joe Root out after scoring 44 runs.

A brilliant running catch at the deep fine leg.

The current run rate is +6 and from here the projected score is 306.

If England score 8 runs per over then the projected score is 325.

"We're the Playground Pundits, and we're taking over tomorrow's match to help raise money for #OneDay4Children."#ViratKohli and #EoinMorgan took part in a press conference like no other!#CWC19 | #ENGvIND

Watch these new cricket pundits' take on this game.

India have dominated in the previous 5 overs and they managed to take 2 important wickets and gave just 9 runs.

Eoin Morgan out to similar shot he was dismissed against Australia in their previous match.

It's the short balls that have troubled the English skipper.

And... Shami struck against to get this important wicket.

Shami to Morgan, caught out by Kedar Jadhav at the fine leg.

Mohammed Shami gave another breakthrough as he took a crucial wicket of Jonny Bairstow.

Shami to Bairstow, caught out by Rishabh Pant standing at the deep cover.

A brilliant 💯 for Jonny Bairstow 👏

It's his 8th ODI ton, which has come in a pressure game.

In previous five overs, England scored 35 runs and they lost a crucial wicket.

Spinner Kuldeep Yadav got the breakthrough.

He took a running catch near the ropes.

He came running from the long-on, diving forward took a stunner.

For the first time in this tournament, Indian bowlers are struggling to get their first breakthrough.

After Jonny Bairstow, now Roy has completed his half-century.

The openers have given a terrific start to the team in this must-win game.

It's his third 50 of this edition of World Cup.

He completed 50 runs with a magnificent sixer over the long-on.

England are off to an ideal start.

The openers are rotating the strikes and hitting big shots as well.

In the previous 5 overs, England have scored 19 runs without losing wickets.

Now, India are desperate for wickets to break the partnership between Roy and Bairstow.

Both the openers are looking good at the moment and they have played some beautiful shots that shows that the pitch is good for batting.

Both the teams have sung with their national anthems and the game will start in five minutes.

Rishab Pant will make his World Cup debut as he has replaced Vijay Shankar in India's Playing XI.

For England, Jason Roy has been declared fit and is back in the squad.

A game for a good cause:

England are set to take on India in their #OneDay4Children clash at Edgbaston on Sunday.

Virat Kohli-led team will put on a different jersey other than their usual blue as ahead of the World Cup, ICC had issued a guideline, requiring teams to have two different uniforms for all its televised tournaments except hosts England.

Keeping ICC's verdict in mind, India will be wearing an orange-blue jersey which was unveiled on Friday to distinguish themselves from hosts England who wear a lighter version of blue. 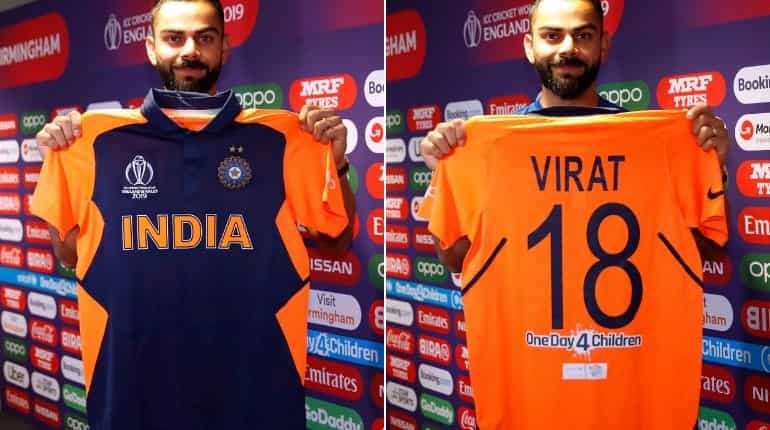 Virat said, "For one game, it's fine. I don't think permanently we'd be heading in that direction because blue has always been our colour, very proud to wear that. For a change and looking at the occasion, it's a very smart kit."

Kohli, however, loved the designed and gave it an eight out of 10. "The fit is great, it's a nice change," he said.

Training is different than usual for the big game.

There's bright sunshine, the baked pitch on the drier side with a promise of more turn than usual.

The weather for today's game is set fair and the temperatures will reach as high as 25 degrees Celsius.

Not to forget the New Zealand's match against Pakistan in which, pitch provided assistance for spin.

Both the teams have played a total of 99 one-day matches. India dominate the tally by winning 53, while England won 41. Two clashes were tied.

India, with an unbeaten record in six encounters so far, Virat Kohli's men are all but through to the semi-finals with 11 points but a win against England will further tighten their grip at the top and in the process oust the hosts from the global event.

Not long ago, England were considered to be favourites to win the tournament but Eoin Morgan's men have bungled big time in crucial games, which has now brought them at the verge of exit with only eight points from seven games.

But with their backs against the wall, Eoin Morgan and his boys can be expected to give it their all as they must win their match against India and then against New Zealand to make it to the semis.

For India, playing two wrist spinners in these conditions along with a lethal Jasprit Bumrah could well spell doom for an English side.

The middle-order batting still remains a concern and Vijay Shankar's performance at number four certainly makes him a weak link.

Hello! And welcome to the Match 38 of the Cricket World Cup 2019 which is between England and India at Edgbaston.