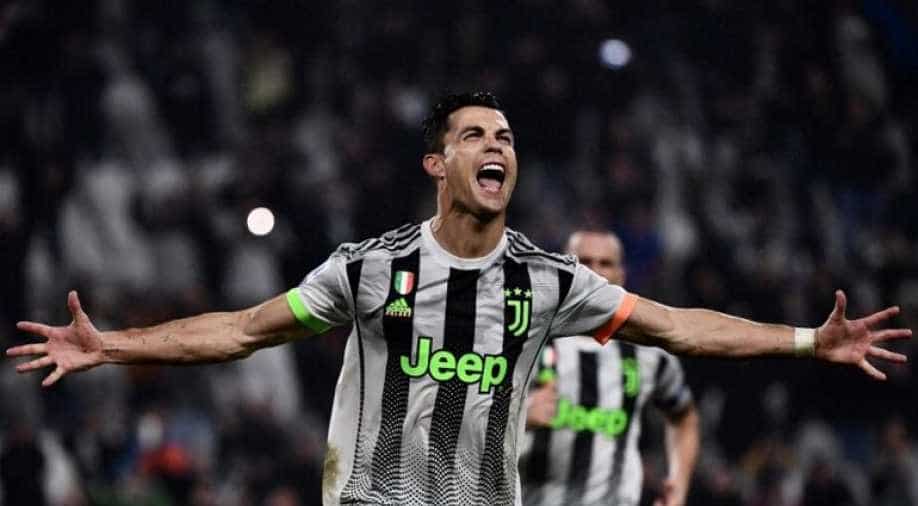 Ronaldo sat out the 1-1 draw at Lecce over the weekend but Juve looked set to drop more points on his return in Turin.

Cristiano Ronaldo converted a 96th-minute penalty as Juventus defeated Thiago Motta's Genoa 2-1 to reclaim top spot in Serie A on Wednesday, while Napoli were left seething after conceding a disputed late equaliser against Atalanta.

Ronaldo sat out the 1-1 draw at Lecce over the weekend but Juve looked set to drop more points on his return in Turin as Christian Kouame's fluke equaliser cancelled out a header from Leonardo Bonucci.

The Portuguese forward saw a stoppage-time strike ruled out by VAR for offside before he won a last-gasp penalty after he was fouled by Toni Sanabria.

Ronaldo drilled the spot-kick low beyond Ionut Radu for his fifth league goal of the season to send Maurizio Sarri's Juve back above Inter Milan at the summit.

"It was a difficult game against a well-organised team but Juve must keep going until the end," Ronaldo told Sky Sport.

"We suffered a lot tonight but we created a lot and deserved this win."

Genoa, in their second game under Motta, played most of the second half with 10 men after Francesco Cassata was sent off, while Juve substitute Adrien Rabiot was dismissed late on for two bookable offences.

Atalanta twice fought back from a goal behind to hold Napoli to a 2-2 draw at the San Paolo, where a fiery ending resulted in red cards for Carlo Ancelotti and his assistant.

Josip Ilicic struck a contentious 86th-minute equaliser that was upheld following a lengthy VAR review, as Napoli appealed for a penalty.

Napoli forward Fernando Llorente tumbled to the ground after jostling with Simon Kjaer in the Atalanta area before the visitors countered and scored through Ilicic.

A five-minute interruption followed before the referee awarded the goal without reviewing the incident on the touchline monitor.

"I consider what happened an attack on my professionalism, my players and my club," Ancelotti said.

Napoli president Aurelio De Laurentiis was livid with the officiating.

"If there is VAR it's pointless creating eight minutes of additional time because all that happens is pushing and shouting," he told Sky Sport Italia.

"And what is this buffoonery from the referee who kicks out a gentleman like Ancelotti?

"We're fed up. Without us, the referees would be peeling potatoes. We're tired of paying for this standard of refereeing."

Nikola Maksimovic had headed Napoli into the lead on 16 minutes, but Remo Freuler levelled just before half-time when his shot squirmed through goalkeeper Alex Meret.

Polish striker Arkadiusz Milik hit the post and crossbar before putting Napoli back on top on 71 minutes when he raced onto a Fabian Ruiz pass and rounded Pierluigi Gollini.

However, Ilicic levelled and nearly grabbed a winner in stoppage time for Atalanta, who stayed third but now trail leaders Juve by five points.

"From the pitch, I thought it was a penalty. Then, seeing the images, I saw a big elbow to Kjaer's face," Atalanta boss Gian Piero Gasperini said of the passage of play that led to his team's controversial equaliser.

"The images are very clear. Whoever was in the VAR booth confirmed what the referee saw, but I'm rightly biased."

Roma climbed above Napoli into fourth after a 4-0 rout of Udinese despite losing Federico Fazio to a red card on 31 minutes.

Nicolo Zaniolo opened the scoring before the dismissal of Fazio for a foul as the last defender.

Chris Smalling doubled Roma's lead early in the second half with a Justin Kluivert goal and Aleksandar Kolarov penalty wrapping up victory.

Ciro Immobile struck twice to take his league-leading tally to 12 goals as Lazio swept Torino aside 4-0.

Cagliari extended their unbeaten run to eight games with a 3-2 win over Bologna while Fiorentina came from behind to defeat Sassuolo 2-1.

Sampdoria remains rooted to the foot of the table despite Gaston Ramirez salvaging a 1-1 draw with an injury-time equaliser at home to Lecce.