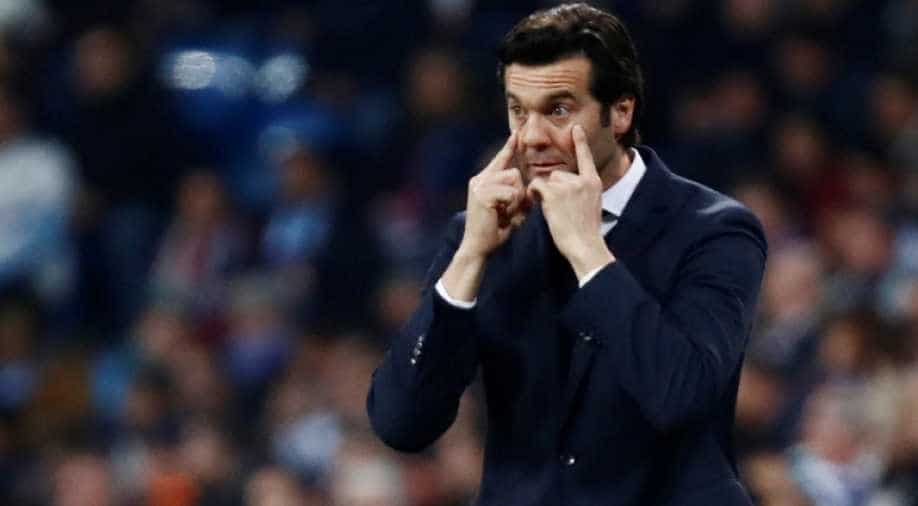 After three consecutive defeats at home, twice to Barcelona in the Copa del Rey and La Liga, and once to Ajax in the Champions League, the expectation is Madrid are ready to make a change.

Santiago Solari has said he remains fully committed to his job as Real Madrid coach despite speculation that Sunday's match against Real Valladolid could be his last.

Solari arrived an hour and 20 minutes late for his press conference at Valdebebas on Saturday and there was an air of resignation in his responses to questions about his future.

After three consecutive defeats at home, twice to Barcelona in the Copa del Rey and La Liga, and once to Ajax in the Champions League, the expectation is Madrid are ready to make a change.

"The first day I sat here, I said we are all passing through, we know that, and even more so in a position like this," Solari said.

"The most important thing for any coach, and any team, is the next game. The concentration is on the next match and the commitment is the absolute maximum, always, because it is an honour to serve this club."

Club president Florentino Perez could give Solari until the end of the season when more alternatives are likely to be available, or install a quick replacement, allowing a new coach more time to assess the squad.

Jose Mourinho and Zinedine Zidane are both available and have been linked with returns to the club.

Madrid sit 12 points behind Barcelona in the league and head to Valladolid on the back of the crushing 4-1 defeat to Ajax on Tuesday.

"I am the coach and tomorrow, our obligation, mine in particular, is to go there and do the best we can," Solari said.

"We know it is not the best moment for us after the game the other day but we have a professional obligation, we have 12 games ahead, and we have to stay as positive as possible.

"Mathematically we are still in it although there is a lot of ground to make up. The first job is to win tomorrow."

Several players could also be playing for their futures, with an overhaul expected in the summer. Gareth Bale, Toni Kroos, Marcelo, Casemiro and Karim Benzema have all been disappointing in recent weeks.

Asked if the players' performances have been worthy of Real Madrid, Solari said: "Most of them have. And those that haven't been, I have told them personally."

Isco was not even included in the squad to face Ajax and refused to travel on the team bus.

"Disciplinary issues are handled internally," Solari said. "On the pitch, it is always the same, you have to get yourself fit enough and playing well enough to get in the team."

Sergio Ramos is suspended for the game on Sunday but will travel with the squad.

"We have talked and he will travel," Solari said. "It seems very important that he comes at this time to support the team, the club, and to exercise his role as captain."