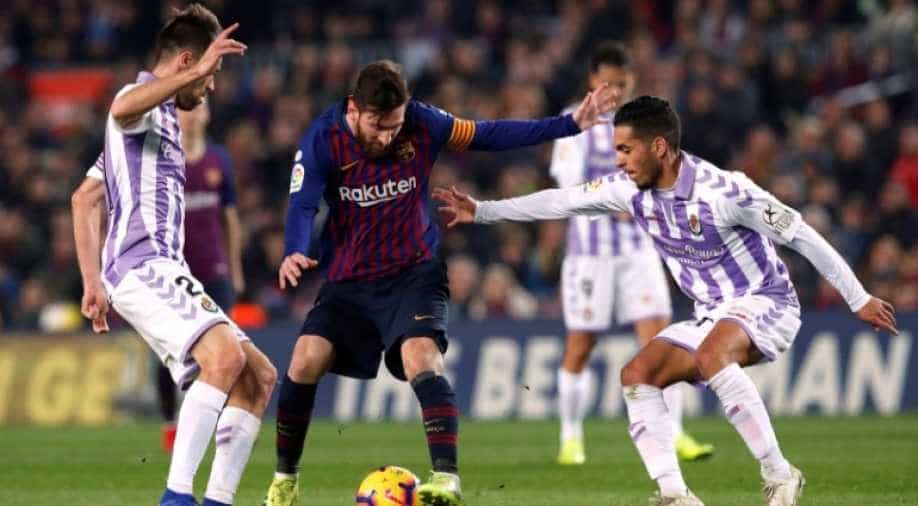 By virtue of this win, Barca has opened up a seven-point lead at the top of La Liga.

Lionel Messi scored one penalty and missed another as Barcelona beat Real Valladolid 1-0 on Saturday to open up a seven-point lead at the top of La Liga.

The Catalans played far below their vibrant best but were not troubled by the visitors at the Nou Camp as they ended a run of three consecutive draws in all competitions.

Ousmane Dembele was handed his first start after injury, and loan signing Kevin-Prince Boateng featured for only the second time since joining in January as coach Ernesto Valverde started with Luis Suarez on the bench ahead of Tuesday's Champions League clash at Olympique Lyonnais.

Barcelona struggled to create chances against a tight Valladolid defence, only breaking the deadlock when Messi converted a penalty won by Gerard Pique just before halftime for his 22nd league goal of the season.

Messi almost scored his second early in the second half but former Barcelona goalkeeper Jordi Masip pulled off a breathtaking stop to deny La Liga's top scorer from close range.

The Argentine had another chance from the penalty spot in the final stages after substitute Philippe Coutinho was fouled but Masip made another impressive save to deny him.

"We didn't move the ball as quickly as we needed to," said Valverde. "We lacked fluidity in the first half, we had it in the second. We were more ourselves.

"We had six chances but we know that everything is looked at through the result."

At times it seemed like Barcelona's minds were already drifting towards the return of the Champions League, with only Pique performing particularly well on his 300th La Liga appearance for the club.

The defender's charge upfield led to Barcelona's penalty in the first half and another similar drive forward got fans out of their seats after the break.

"We weren't the Barca we wanted to be today," said Pique.

"For Tuesday we have to be better or it will go badly for us. If we don't move the ball quickly, dominate possession and create chances we become a weaker team."

Messi, who has been suffering some discomfort in his thigh, looked fitter than he did last weekend when Barca drew 0-0 with Athletic Bilbao yet he gave the ball away on numerous occasions.

Only Masip prevented Messi from adding to his tally and the goalkeeper completed an impressive homecoming display with a fine save from substitute Suarez at the end.