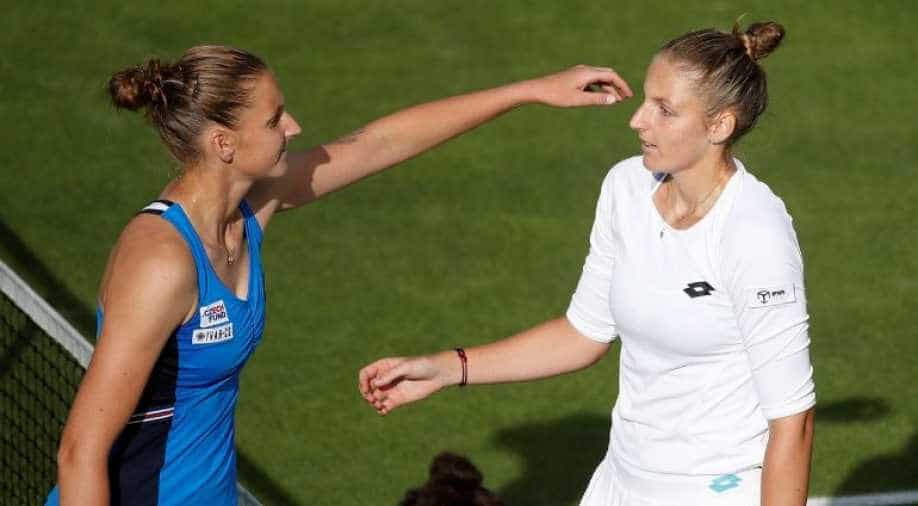 Kristyna Pliskova pulled off the biggest victory of her career but it was bad news for twin sister Karolina who was on the receiving end of a 6-2, 3-6, 7-6(7) defeat at the Birmingham grasscourt event on Wednesday.

The world number 112 fired down 24 aces as she beat world number three Karolina in their first meeting in a WTA event to stay on course for a second career title.

It was Kristyna's first win over a top-five ranked player and she will go on to play fellow Czech Barbora Strycova in the quarter-finals.

"I'm happy with the way I served today. I think we played the best that we could but it was not easy for us. She was nervous as well. The serve was the key and I'm happy I won," Kristyna said.

The twins set up the second-round clash after Karolina accepted a wildcard and defeated Mihaela Buzarnescu on Monday while Kristyna came through three rounds of qualifying before beating Viktoriya Tomova.

"I know it's been six years since we last played," Kristyna, who beat her sister in the Eastbourne qualifiers in 2013, said.

"But we were both stressed about it and on centre court you never know how it's going to be. We played okay tennis, but it's like this, one had to win. I can imagine how she feels, I would feel the same. Maybe she feels worse because she was the favourite," said Kristyna.

Kristyna, two minutes older than her sister, broke early in the contest and raced ahead 5-1 before closing out the opening set with an ace.

Former US Open finalist Karolina, who lost the last clash between the pair at the Eastbourne qualifiers six years ago, responded strongly to drag the match into a decider.

Kristyna surged 4-1 ahead in the third set but Karolina fought back to force a tiebreak.

A third double fault by Karolina at 7-7 gave her twin match point and Kristyna held her nerve to seal a memorable victory.

"We had a deal before the match that whoever wins is buying something for the other one, so I get a present," Kristyna said.

"I think we do room service today and we just stay together because we shared a room. She has a day off, so maybe we'll go shopping again and she pays."