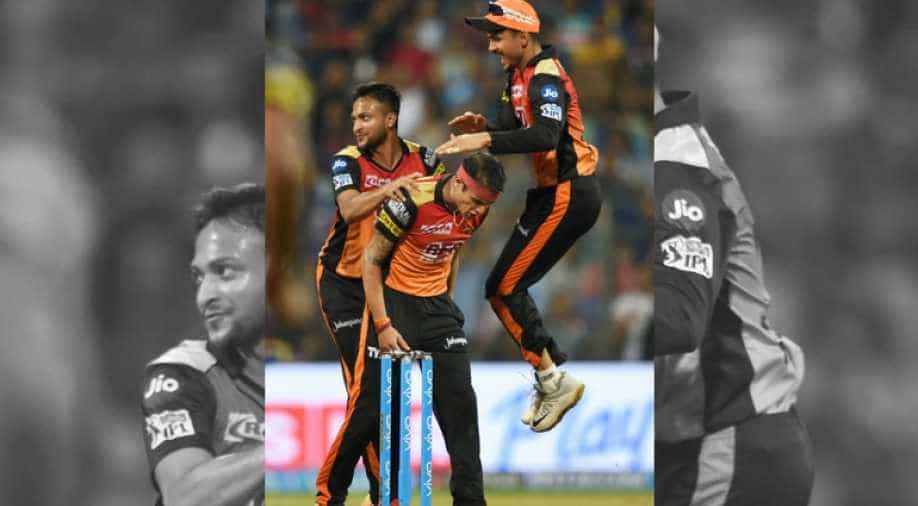 Defending champions Mumbai failed to chase the lowest score set by any team in IPL 2018, and lost to Hyderabad by 31 runs at Wankhede Stadium on Tuesday.

Mumbai lose 5 in chase of 119, out of six games played in this year's cash-rich tournament.

Apart from Suryakumar Yadav and Krunal Pandya no other player reached the two digit mark.

Their batting line failed to score any runs and the credit goes to Hyderabad's bowlers.

Kane Williamson-led side was bowled for just 118 runs, setting the lowest target for any franchise in the ongoing Indian Premier League (IPL).

Hyderabad had a poor start as they lost opener Shikhar Dhawan and Saha too early. for just five runs. He was bowled by McClenaghan.

In the same over, the Mumbai pacer managed to send wicketkeeper-batsman Wriddhiman Saha back to the pavilion on a duck. So far, Saha did not had a good campaign in the cash-rich tournament.

Skipper Williamson, who was the backbone of the franchise in last all matches, failed to stand up for the team this team.

He gave away his wicket to Hardik Pandya after making 29 runs off 21 balls.

However, he is the highest scorer for the franchise.

As usual, the downline again failed to perform, resulting in a poor score on the board.

Yusuf Pathan tried to save Hyderabad from drowning but was also sent back by Mustafizur.

He became the second highest scorer for the team by making 29 runs off 33 balls.

Earlier, Mumbai skipper Rohit Sharma on Tuesday won the toss and opted to field against Hyderabad at the Wankhede Stadium.

Mumbai, which lost four out of five games played, will be looking to outplay Kane Williamson-side in order to get their campaign back on track.

Talking about his team and strategy for today, the Mumbai batsman said, "We are gonna bowl first. It is a good pitch and it is hard ground to defend. Not gonna change a lot through the course of 40 overs. It's been a little disappointing in those terms (losing close games). We played good cricket and it is just the finishing touch we are lacking."

"We played five games so far and we need to understand as a team where we went wrong. It is a fresh game and we want to treat every game as a new game and start afresh because it is important to keep our head straight and work towards the victory. We are unchanged," he added.

Hyderabad, on the other hand, lost two consecutive matches. The team had given a good start to their campaign in this year's IPL as they won three matches in a row to be at the top of the points table.

Opener Shikhar Dhawan, who missed the last match against Chennai due to injury, is making a return. The franchise is highly dependent on openers as the middle-batting order has not performed so far.

Talking about their strategy for today, Williamson said, "We would have liked to bowl as well. It does look like a good surface and whatever we are gonna do, we should do well. We are going with 3 spinners and 3 seamers."

"Obviously number of injuries with Bhuvi and Stanlake missing out with injuries. Shikhar is back in the side. Nabi and Thampi are in too. Exciting times for us as some of the guys have got the opportunity for the first time this season. Looking forward to an exciting contest," the Hyderabad skipper added.

The franchise suffered a huge blow as star pacer Billy Stanlake has been ruled out of the remainder of the ongoing edition of the Indian Premier League (IPL) due to a fractured finger.