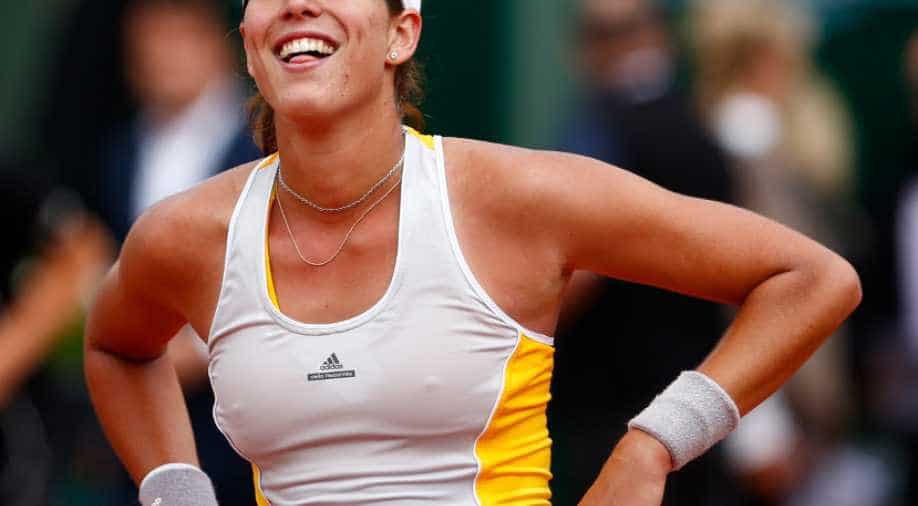 Spaniard Muguruza, who lost to Williams in last year's final, looked lacklustre and struggled with the accuracy of her powershots in second round. (Representational Image.) Photograph:( Getty )

Follow Us
Second seed Garbine Muguruza, gunning to add the Wimbledon crown to her French Open title, was sensationally beaten in the second round on Thursday by a Slovakian qualifier, removing one of the biggest obstacles to Serena Williams defending her title.

Jana Cepelova pulled off the shock of the tournament so far, downing the Spaniard 6-3 6-2 in a nerveless Court One display.

Spaniard Muguruza, who lost to Williams in last year's final, looked lacklustre and struggled with the accuracy of her powershots that had thrilled the French crowds.

"I think my energy was missing a little bit today," she told reporters.

"Today during the match, and after the match, I'm like, it's a tough day today. I feel empty a little bit, and I start to be sick. But I think it was a little bit of a combination,” she added.

Muguruza had laboured in the first round against Italy's Camila Giorgi on Monday, eventually winning through in three sets, but had not lost against a player ranked outside the top 100 since last August on the hardcourts of Cincinnati.

Cepelova played fearlessly: Muguruza
However, Cepelova, ranked 124th and having come through three rounds of qualifying, had served notice that she could cause an upset, having a two-two record over top-five players.

The 23-year-old brought all the pedigree that helped her down then world number three Simona Halep in the first round last year, racing through the match in 59 minutes.

She broke Muguruza at the first opportunity, forcing a backhand error, and never looked back, sassing her opponent at the net, outdoing her on the baseline and sealing both sets on the first set points.

"I think she played great, with no fear. She was trying a lot of stuff that was working. My energy was not really there. I was trying, but didn't work at all," Muguruza, 22, said.

Her defeat removes one of the major challengers to Williams's bid the equal Steffi Graf's Open era record of 22 grand slams by lifting the trophy next Saturday.

French open champ dismisses defeat as 'no drama'
Muguruza had achieved the rare feat of overpowering world Williams to claim her maiden grand slam title on the Paris clay with a 7-5 6-4 win over the world number one and many had thought she could go all the way at Wimbledon.

She ruefully dismissed Thursday's defeat as no drama, and the sunny, relaxed demeanour that has won her legions of fans was still in evidence. She scotched suggestions she had buckled under pressure heaped on her after her Paris triumph.

"No, not pressure. I think for sure more expectations from other people. But honestly, for me, I just was very clear it was going to be a rough tournament for me after winning a grand slam and coming here. Everybody likes looking at me," she said.

"One day it's going to go my way, another day no. Hopefully, my consistency will improve and I'll be able to be deep in all the tournaments."