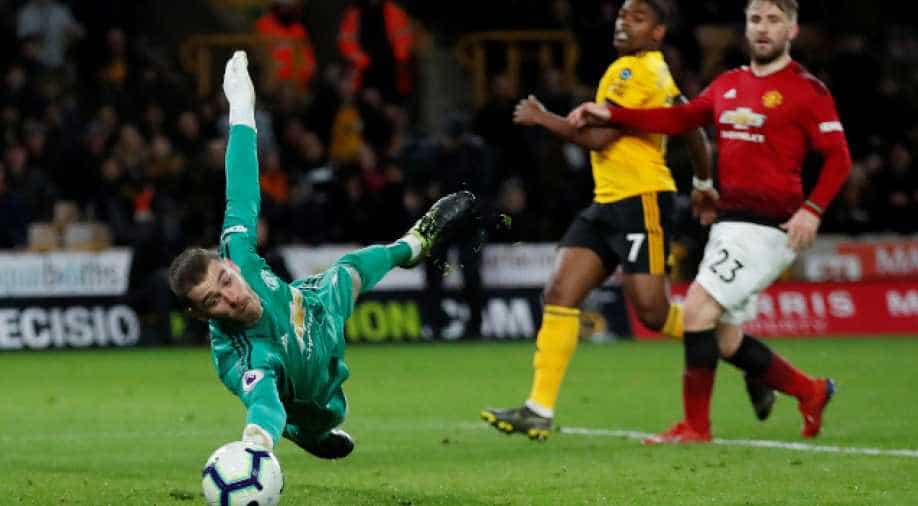 United, who went down to 10 men from the 57th minute after Ashley Young was sent off for a second yellow card, had begun brightly.

Wolverhampton Wanderers repeated their FA Cup defeat of Ole Gunnar Solskjaer's Manchester United thanks to a Chris Smalling own goal that gave them a 2-1 comeback win in a pulsating Premier League game on Tuesday.

The result left United, who were reduced to 10 men in the second half, fifth on 61 points, behind Tottenham Hotspur on goal difference, denting their hopes of ending the season in the top four and qualifying for next year's Champions League.

The result also gave them plenty to ponder before next week's Champions League quarter-final first leg against Barcelona.

"We created our own downfall really ... But for their keeper, we should have won this game," rued Solskjaer.

Indeed, United, who went down to 10 men from the 57th minute after Ashley Young was sent off for a second yellow card, had begun brightly.

Romelu Lukaku saw a point-blank header saved by Rui Patricio, before Scottish midfielder Scott McTominay swept home a low 13th-minute shot from outside the box to make it 1-0. It was his first goal in 41 appearances for the club in all competitions.

Undaunted and fielding a strong team despite the distraction of an FA Cup semi-final against Watford on Sunday, Wolves quickly settled down on a cold and raucous night at Molineux and began creating plenty of chances of their own.

Portuguese striker Diogo Jota hit a deserved equaliser from close range in the 25th minute after a nervy-looking Fred had lost control and Raul Jimenez threaded the ball into the area.

But the game turned on right back Young's sending off for a second yellow card after a reckless hack on Jota. That enabled Wolves to pour forward, and in the 77th minute they got the winner when Smalling inadvertently prodded the ball over his own line after a goalmouth scramble.

"To do it twice against such an amazing team … I'm pleased for the fans and the boys," said Wolves' jubilant coach Nuno Espirito Santo who celebrated with the crowd, pumping his fist, at the end.

"United began the game very well ... We reacted well ... It's not easy to play against Man United. There's no secret. Work."

Wolves, who came up from the Championship last year, are seventh in the Premier League on 47 points, a dream position for their fans.