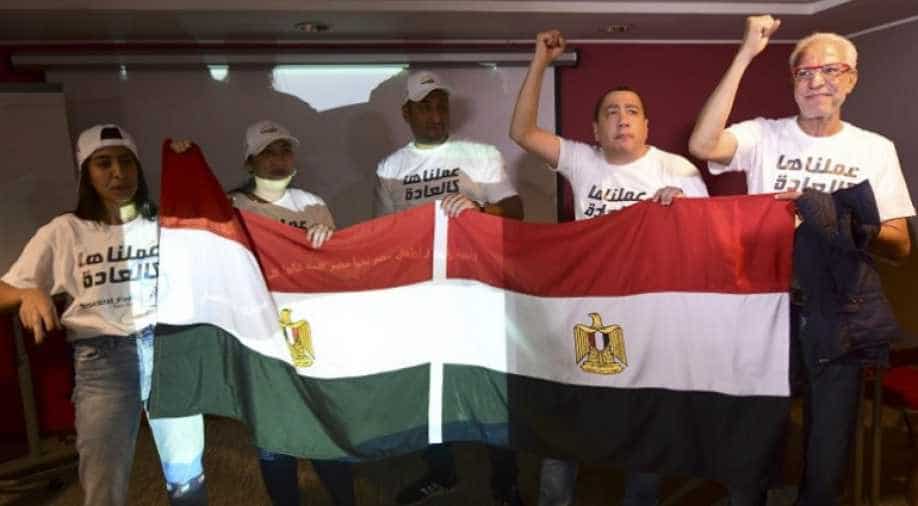 Egyptian representatives wave their national flag as they celebrate the Confederation of African Football (CAF) executive committee's decision to choose Egypt to host the 2019 Africa Cup of Nations (CAN). Photograph:( AFP )

The CAF executive committee preferred Egypt to South Africa as replacements for original hosts Cameroon, who were dropped due to delays in preparations and concerns over security.

The CAF executive committee preferred Egypt to South Africa as replacements for original hosts Cameroon, who were dropped due to delays in preparations and concerns over security.

"I am pleased to announce that Egypt will host CAN (Cup of Nations) 2019," Malagasy Ahmad told reporters.

"I want to thank the two countries -- they came to the rescue of the CAF when we saw that the evolution of the work in Cameroon was not developed."

A CAF official told AFP that Egypt received 16 votes from the executive committee, South Africa one and there was one abstention.

Ahmad made the announcement just hours after CAF said it would not disclose the winner until Wednesday to allow the media to concentrate on the annual awards ceremony in Dakar later Tuesday.

It will be the fifth time Egypt stage the biennial showpiece of African football after 1959, when the country was called the United Arab Republic, 1974, 1986 and 2006.

Egypt only entered the running to host the Cup of Nations when fellow north African country Morocco announced they would not bid to do so.

Morocco were the hot media favourites to replace Cameroon as hosts and Egypt said they "did not want to compete against a fellow Arab nation".

Ismailia, Port Said and Suez are other possible venues for tournament matches as the Cup of Nations returns to north Africa after a 13-year absence.

The choice of Egypt will immediately make them favourites to win a record-extending eighth Cup of Nations title this year.

They won three of the four previous tournaments they hosted, failing only in 1974 when they were beaten by Zaire (now the Democratic Republic of Congo) in the semi-finals.

The star of the current team, Liverpool attacker Mohamed Salah, is favourite to retain the African Player of the Year award in Dakar.

Security and weather will be two challenges facing Egypt in the first Cup of Nations to feature 24 teams, up from 16 in Gabon two years ago.

Egypt faces a constant terror threat in the volatile Middle East region and the weather during the tournament is expected to be hot and humid.

Djamel Belmadi, coach of 2019 qualifiers Algeria, said recently that he would prefer South Africa to host the tournament because of the cooler weather conditions there.

"It is almost impossible to play (in Egypt) given the heat and humidity," he told the Algerian media. "The weather conditions in South Africa are more pleasant."

Egyptian football official Karam Kordi responded: "It would be better if Belmadi said he was afraid of the enthusiastic Egyptian supporters."

The other 10 places will be filled after the final qualifiers between March 18 and 26.