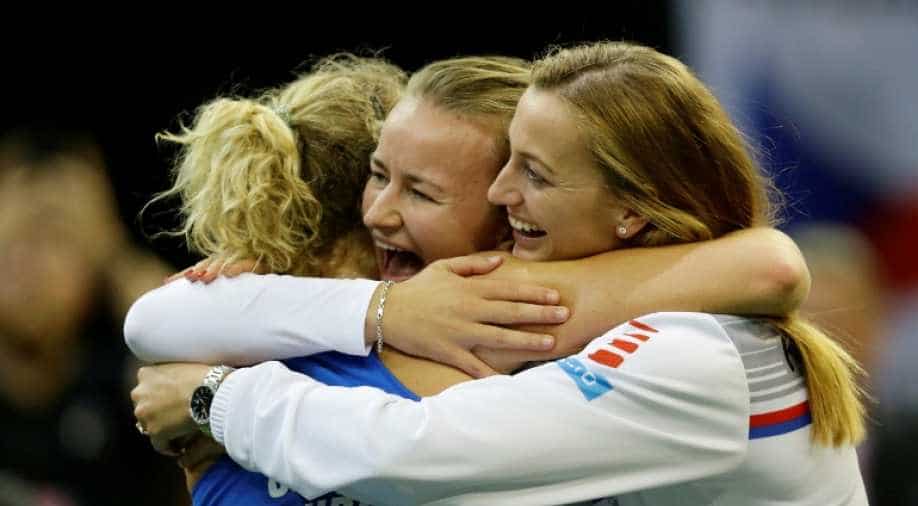 Czech Republic's Katerina Siniakova celebrates with Petra Kvitova and Barbora Krejcikova after winning her match against Sofia Kenin of the US. Photograph:( Reuters )

The competition's two most successful nations were meeting in a Fed Cup final for the first time in more than three decades.

In an exciting back-and-forth rubber lasting three hours 45 minutes, Siniakova held off the 19-year-old Fed Cup debutante to give the Czechs a 3-0 win in the final against a United States team who were the defending champions but were missing their top players.

Despite also losing their two best players just before the final, the Czechs proved their dominance in the women’s team tournament this decade, leaning on the hustle of Siniakova.

"It was an unbelievable match for me. It was up and down, nerves," the 22-year-old Siniakova said on the court after the marathon match that was just short of the longest rubber - at four hours flat - in Fed Cup history.

"I am just terribly happy I won."

Siniakova, who won the French Open and Wimbledon doubles titles with her Czech teammate Barbora Krejcikova this season, proved too much in the end for the Russian-born Kenin, who cried after the match and was consoled by her teammates.

With the Czechs an unassailable 3-0 up in the best-of-five final, the second reverse singles and the doubles were cancelled.

The competition's two most successful nations were meeting in a Fed Cup final for the first time in more than three decades.

The US team, though, fielded three Fed Cup newcomers, including Kenin, as they were without Serena and Venus Williams, holders of a combined 30 grand slam singles titles, along with world number six Sloane Stephens and Madison Keys, semi-finalist at both Roland Garros and Flushing Meadows.

On the Czech side, world number eight Karolina Pliskova pulled out with injury and twice Wimbledon champion Petra Kvitova could only cheer from the bench after fighting illness this week.